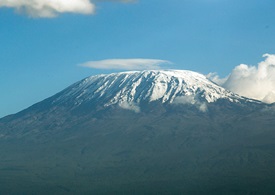 enya Wildlife Service pilots fly low, watching the land they protect from just above treetops, as George Mwangi ably demonstrated in a well-worn Piper Super Cub with its door removed to afford his back-seat passenger a better view. Acacia and elephants blurred past, appearing close enough to reach out and touch. It proved easy to forget how dangerous this kind of flying can be, so close was a wild and vivid landscape of black rocks, blue springs, and green vegetation highlighted against ochre red soil, or softly blanketing the slopes and caldera of a long-slumbering volcano.

The engine hummed and a warm African wind shouted in the cabin as Mwangi wove between hills just 40 miles from the peak of Mount Kilimanjaro, which frames the setting sun when revealed by the passage of clouds from its distinctive face.

The only way to avoid danger, one pilot noted, was to fly up high, where “you can’t see anything.”

Returning to the airstrip in Kilaguni, Kenya, Mwangi climbed to pattern altitude and kept an eye out for traffic, including elephants, giraffes, gazelles, and any number of other beasts known to wander across the dusty red runway at inopportune intervals. African buffalo had moved through in numbers not long before the visiting American pilots arrived, leaving tracks and dung to be cautiously sidestepped, and something to think about when considering excursions beyond the perimeter fence that protects tourists at the remote safari lodge.

Spencer and Sugden presented the Airwing with a set of satellite beacons capable of supporting two-way texts, distress signals, and position reports, subscriptions prepaid. These were readily accepted, with gratitude; it was less clear weather the American’s admonitions to develop and use checklists would have a lasting effect.

Checklists were not in evident use in Kenyan cockpits, though their use might not have prevented any of the numerous accidents that have left aircraft badly damaged and pilots hurt or killed. Loss of control at low altitude is a common theme. Many of the aircraft have been rebuilt multiple times, with welds upon welds in their framework.

Word came back to Kilaguni one morning that a Husky had flipped over after veering off a rugged airstrip a few miles away during a takeoff attempt. No one was harmed, but the relief on Mwiti’s face was replaced with a scowl as he considered the situation.

“This is the life,” he said, without any trace of irony.

During the first week of March, the final days of the dry season, a very particular kind of flight school was set up within Tsavo West National Park, organized in an effort to save lives. Fuel was cached in drums; a pair of Aviat Huskies, a Piper Super Cub, and a Cessna 182 were flown in from patrol assignments scattered around a country nearly the size of Texas. A Cessna Caravan delivered American volunteer pilots and Kenya Wildlife Service officials from Nairobi.

Thus converged on Kilaguni the bulk of the Kenya Wildlife Service Airwing, at least in terms of currently airworthy aircraft (the Airwing has 11 aircraft in all, though several are being repaired or rebuilt following accidents); nearly all of the Airwing’s dozen pilots would spend the week learning new skills and sharpening their airmanship, preparing for a mission with no margin for error: flying low and slow, over remote bush, savannah, arid plateaus and rugged mountains, searching for armed criminals known to resist capture with violence.

Skyrocketing prices for black market ivory and rhinoceros horn, known to command $30,000 a pound from unscrupulous buyers, have made matters much worse in recent years.

Kenya has been locked in a bloody fight against poaching for decades, a battle that extends across Africa. While Kenya Wildlife Service officials report some success, reducing in 2013 the estimated number of elephants lost to poachers to just over 300, down from about 380 in 2012, the number of critically endangered black rhinoceros losses nearly doubled to 59 in that period.

Bill Clark, an American biologist who has worked with Kenya conservation officials for more than 30 years, and has served for the last four as the Kenya Wildlife Service U.S. liaison, said losses mounted—in terms of both people and animals killed—as the black market prices for ivory increased tenfold or more in the past five years. Financed primarily by fresh demand from the burgeoning middle class in Asia, poaching gangs have gained access to increasingly sophisticated weapons, communications devices, and other equipment. A single large elephant can yield $80,000 in illegal ivory; even the relatively small portion paid to the actual poachers (about $3,000 for the typical elephant) represents a years' worth of honest wages, or more.

“This results in poachers being much more willing to take risks,” Clark said, noting that willing buyers, middle men, and nations willing to turn a blind eye all contribute to the problem. “It’s a syndrome that extends right from the bush all the way back to capital cities, major cities in Asia, as well as the rest of the world.”

‘A heritage we have to conserve’

Huskies and Super Cubs—donated  to Kenya Wildlife Service by benefactors responding to Clark’s impassioned pleas—play a major role in Kenya’s effort to protect wildlife, a critical national resource because animals bring tourists, the country’s largest source of foreign currency. Pilots are the eyes, the supply line, and the ambulance for about 1,500 rangers now deployed, a number that is increasing as new rangers are trained to combat the growing threat. The tiny conservation air force supports a national conservation and enforcement effort spanning more than 50 parks and protected areas, roughly 8 percent of the nation’s land.

In the bush, desperate men—most from Kenya and neighboring Somalia—kill elephants and rhinoceros, singling out the largest and healthiest animals despite facing (thanks to recent updates in Kenya’s wildlife protection laws) life in prison and huge fines if captured and convicted.

They often prefer to fight. Clark said KWS has lost 61 rangers in the past 20 years, from a force of about 1,000 who served during that period.

There is growing concern in the conservation community that the pace of elephant losses cannot be sustained, and the black rhinoceros has been hunted nearly to extinction.

“It is a heritage that we have to conserve for the whole of humanity,” said Robert Muasya, the KWS acting deputy director, security division.

Just about any KWS pilot who has flown for any length of time has had a brush with death, either from ground fire or other hazards of the job. In 2010, Kenneth Mwiti had just departed after dropping a passenger when he spotted a rhinoceros. The former Kenya Air Force pilot banked steeply into a wingover, turning around for a better look, and in a flash found himself descending rapidly in a spiral or spin. He managed to straighten the nose and begin to raise it before hitting the ground, but only just, and spent two years recovering from broken bones in both legs, his back, and hand.

“I’ve had the scars of conservation,” Mwiti said. “I’m lucky enough to be here to talk about it. It was a close shave.”

“It can’t be something that you have to think about,” Wagstaff said, noting that there is no margin for error at 200 feet agl. “I’m tough on them.”

Mwiti said good habits require regular reinforcement, and the time spent flying with Wagstaff and her fellow Americans was crucial for each of the Airwing pilots, be they newly minted rookies (about half of them are), or experienced aviators.

“It becomes normal,” Mwiti said. “Even if it’s a deviation, it becomes a normalization of deviation.”

‘This is the life’

Joining Wagstaff and making his third visit to Kenya, Dr. Richard Sugden honed his own skills flying with U.S. Navy test pilots while serving as a Navy doctor. He has become one of the major individual benefactors of KWS, joining the Lindbergh Foundation in the 2010 donation of a factory-new (and much-needed) Husky for the KWS Airwing; Sugden has also earned a nickname from the pilots: “Two-Notch,” because he teaches the pilots to avoid using more than two notches of flaps.

Richard Spencer, a retired U.S. Marine Corps pilot, made his first visit to Kenya this year and rounded out the flight instructor lineup. Their lessons focused on fundamentals: turn coordination, speed control, squaring patterns, not straying farther than necessary from runways or roads. Go down in the bush, and if you can manage to land on a road there is a chance you will be rescued, Sugden advised the group. 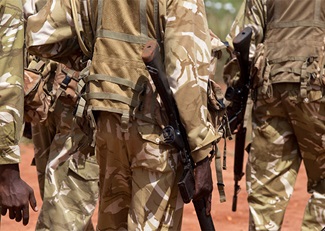 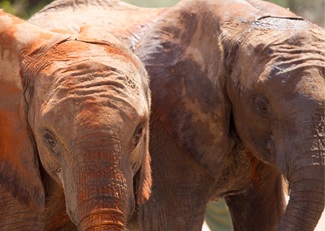 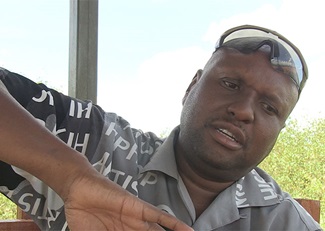 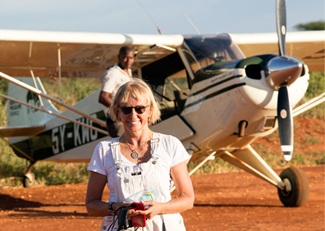 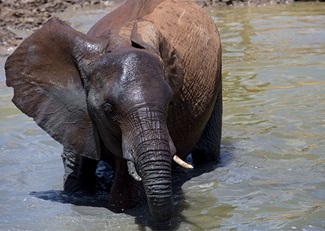 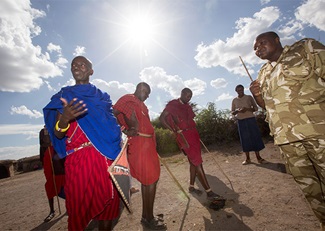 An indefatigable fundraiser, Clark is attempting to close a finance gap made worse by western reactions to terrorist incidents in and around Kenya, which discourage the tourism that funds nearly three quarters of the KWS budget.

“There’s a serious problem here that needs to be resolved,” Clark said. “I was born in New York. There was a big incident there, too. Nobody ever said stay away from New York. To my mind, it is unrealistic and it is also unfair to expect a developing country… to carry this enormous burden of protecting world heritage by itself, especially when it is under these constraints.”

A dozen aircraft are not nearly enough to effectively patrol a nation the size of Texas, not even the protected land, Clark said. “People are spread too thin on the ground, and there’s not enough air cover.”

The Lindbergh Foundation has done much to support the KWS Airwing, funding both pilot training and aircraft donations in recent years. Chairman John Petersen said in a telephone interview that the foundation is discussing with Clark and KWS the possibility of introducing unmanned systems that can handle some of the tasks currently assigned to pilots, particularly surveillance.

“We have a deep sympathy for the mission,” Petersen said.

Charles Lindbergh himself visited Kenya, with a stop in Kilaguni, in 1964, and referenced a local acacia tree in an essay published in Reader's Digest 50 years ago this month, posing the question: “Is civilization progress?” Lindbergh worried that technology was advancing rapidly at the expense of nature, and that mankind stood to lose much more in the long run.

Technology is today being brought to bear to protect nature, as well. Petersen said that if the right unmanned system can be found, one that is simple enough to operate, inexpensive enough to afford, and capable of operating at night, as poachers increasingly do, it might begin to swing the balance. “From an operational point of view, it really sounds pretty smart.”

Other organizations recently donated funds to purchase night vision equipment for KWS rangers, and Clark is ever eager to find more help—particularly aircraft, because unmanned systems cannot rescue a wounded ranger, or drop gallons of water and food to sustain a patrol chasing poachers deep into the bush. He is also working with Israeli police officials to secure dogs capable of attacking and holding poachers for capture, which will allow more to be taken alive, and perhaps lead to the identification of middle men and others up the chain.

Wagstaff said more frequent training for the pilots will also make a crucial difference, though donations are needed for that, also.

Wagstaff said she has seen progress, but also setbacks during her many visits, often spaced two or three years apart.

“I can see that the pilots haven’t had any recurrency training, so we’re having to fix a lot of little things, little bad habits and things like that,” Wagstaff said. “It’s a lot easier to keep doing it on a consistent basis, and watch the progress.” 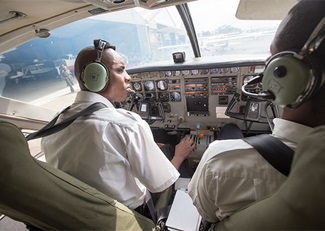 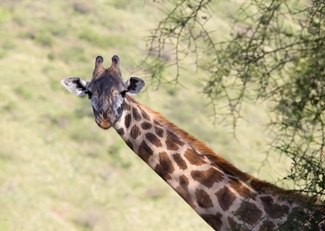 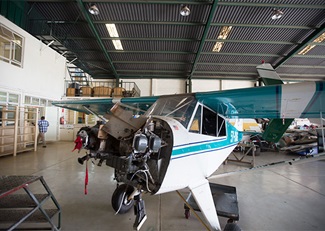 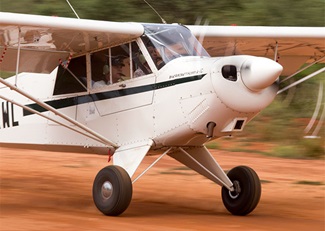 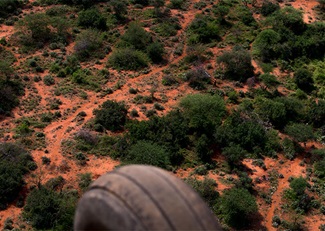 Pilots can support the cause

The Kenya Wildlife Service rations aircraft fuel and other resources carefully to work within budget constraints made worse by a decline in tourism prompted by terrorist incidents in parts of the country, and warnings or cautions issued to travelers by foreign governments.

Donations can be made directly through the KWS website online, though Americans who wish to make a tax-deductible contribution should contact Bill Clark, who can facilitate that.