Get the app Get the app
AOPA will be closing at 2 pm ET on Friday, July 1, in observance of the Independence Day holiday. We will reopen at 8:30 am ET on Tuesday, July 5.
News & Media New website lets users experience airshow flights in HD

Have you ever wished you could be in the mix during the EAA AirVenture airshows? Just in time for AirVenture, Chicago-based Impreciv Systems has released a new online service that puts users in the pilot’s seat during an airshow performance.

The website iFlyTheAirShow.com has partnered with the AeroShell Aerobatic Team and Warbirds of America to experience the airshow in a way that not even the attendees of the airshow can enjoy. 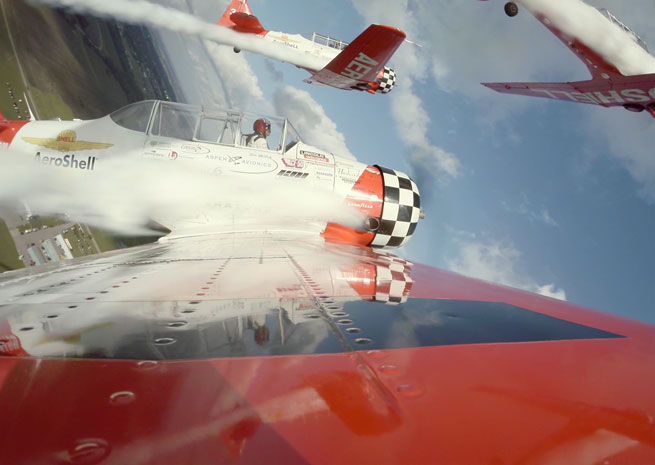 The company was founded by pilots Glenn Olsen and Rick Siegfried. Olsen has been a pilot for more than 25 years and is a captain in corporate and charter aviation and type rated in the Hawker business jet. Siegfried is a United Airlines captain who flies the Boeing 777.

“Rick and I have been friends for years and live in the same residential airpark outside of Chicago, and we’ve been talking about how to connect people with aviation for long time,” said Olsen. “When going to a party, for example, people find out you’re a pilot and then they have dozens of questions.”

So Olsen asked how those people interested in aviation can be connected with aviation. “We found we could build a system for a nominal fee to show people what it would be like to be in a high-performance aerobatic aircraft,” he said..

“The technology we’re using to do this is the same you use to get Wi-Fi in your house. It’s basically a router with an access point,” Olsen said. “The system we built and installed on the aircraft is, in essence, a very sophisticated Wi-Fi router. What we’ve done is made a fairly standard data connection like one in houses available at long distances.

“The hard part was designing an antenna system that allowed the aircraft to maneuver in aerobatics and keep the data stream going,” said Olsen. “We needed to answer how can [the pilot] do their maneuvers while we are streaming video in real time?”

Impreciv Systems will stream four channels of live HD video that will allow users to control their viewpoint live and in real time as performers fly their aerobatic routine via four views: the pilot’s-eye view, the pilot, the tail looking forward, and the wing tip. The channel includes audio from the four cameras, and the cockpit audio will stream along with the HD video. Once the show has ended, users can post their video via Facebook, Twitter, and Google+.

Working with AeroShell and the Warbirds of America was a natural fit. “I’ve been friends with people on the AeroShell team and have raced with them,” said Siegfried. “The proof of concept for the website was done on my T-6, so it only made sense to go to AeroShell and ask to install it on their T-6. It was convenient because we already had a relationship with them.”

AeroShell is one of the premier aerobatic teams, said Olsen. “The view from the number four plane is spectacular. They were a natural fit and this is a great first step for us.”

Users can register for an account and make a reservation for an airshow performance here. The cost is $1.99 for a 20- to 30-minute live experience or $8.49 for five live or on-demand experiences. Try out a sample airshow video here. Registered users will be entered for a sweepstakes drawing for a live ride with the AeroShell Aerobatic Team.