Get the app Get the app
Already a member? Please login below for an enhanced experience. Not a member? Join today
News & Media In-flight Charger 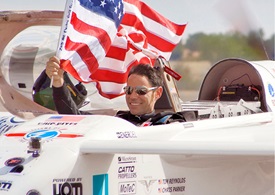 He found in Texas the perfect airplane to tote the batteries from which his Long-ESA, a highly modified Long-EZ, will draw juice in flight: A 1973 Piper PA-28-235 Cherokee Charger, known for its heavy-hauling capability.

“I love that,” Yates said, noting 1973 was the only model year Piper used the “Charger” name. He plans to replace the rear seats with about 500 pounds of batteries and a custom-made extension cord that will carry 200 amps of current to his Long-ESA in flight. The Charger’s useful load was the main selling point, but the irony of the name is certainly an added bonus. “It’s so funny.”

Yates, who retired from motorcycle racing after setting world records in electric-powered bikes, modified his Long-ESA in 2012 (and earned a pilot certificate in two months of that same year in order to fly it) for flights in July 2012 just before EAA AirVenture. He set world records for speed (over a 3-kilometer and 15-kilometer course), altitude (maximum altitude and altitude in level flight), and time-to-climb in an electric aircraft weighing between 1,102 and 2,205 pounds. (The Long-ESA weighs 1,540 pounds with Yates on board.) Things got a little hairy at times; Yates published on July 19 a new video (shown above) of one of the emergency landings that he logged during those record-setting efforts.

Yates’ records include 201.337 mph over a 1.86-mile course, and 140.355 mph over a 9.3-mile course (the batteries can be depleted in as little as 15 minutes at full power). The UQM Technologies electric motor produces 258 horsepower, and can drive the Long-ESA skyward at 2,000 feet per minute. Yates completed a climb from a standing start to 9,843 feet (3,000 meters) in five minutes 32 seconds, another of his recently ratified world records. 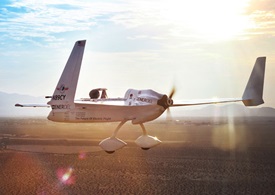 While the FAI electric aircraft record categories did not even exist when Yates set out to set them, getting there was by no means easy.

On July 19, 2012, Yates “floored it” past 200 mph and “blew up the battery pack.” His cockpit filling with smoke, Yates made an emergency landing and had the aircraft on a trailer headed to Oshkosh, Wisconsin the following day, where he was a speaker hosted by the Lindbergh Foundation.

The Yates Electrospace Corp. team is now perfecting the design for air-to-air recharging, a deployable tether that will both charge the Long-ESA and allow the Piper Charger to control the speed of both aircraft to assist in the task. The tether will be secured at the business end with what Yates calls a “butterfly” clamp designed to snap shut and maintain contact. Yates hopes that this system will be tested late this year, or early in 2015, and eventually allow him to cross the Atlantic on battery power, following in the footsteps of Charles Lindbergh at higher speed with a lot less noise.

In the meantime, Yates flies missions for Angel Flight and is writing a book for children about overcoming adversity. He said Angel Flight has been very rewarding, and on flights with patients on board he takes particularly scrupulous care with preflight planning, carries emergency equipment (including satellite beacons and a fully stocked emergency kit) on board, and does everything he can to ensure a smooth and comfortable ride.

“I’m the most conservative guy you’ve ever met,” said Yates, who has made five emergency landings in 400 hours, three of them in his Long-ESA.

Now that is ironic.