The first production HondaJet made its public debut at EAA AirVenture in Oshkosh, Wisconsin, on July 28. The aircraft taxied to Boeing Square, drawing a large crowd of admirers who lined up to see the business jet and take a peek at its interior.

“I have finally brought the first production aircraft to Oshkosh to share with you,” said Honda Aircraft Co. President and CEO Michimasa Fujino to applause from the crowd.

The $4.5 million jet performed its first flight on June 27. The aircraft features over-wing mounted engines, a configuration patented by Honda that reduces drag and noise, and increases fuel efficiency. The GE Honda Aero HF 120 turbofan engine was certified in late 2013. First deliveries are expected in early 2015.

The jet is expected to fly 420 knots true airspeed at maximum cruise at FL300, with a maximum cruise altitude of FL430, according to a spec sheet provided by the company. Its flight deck features a Garmin G3000 avionics system and dual touch-screen controllers for overall avionics and system management. The airplane’s typical configuration is one crew member plus five passengers; an alternative configuration can support one crew member and six passengers.

Fujino said he first visited EAA AirVenture in the 1980s as an engineer with Honda. “I was very shocked to learn that Americans build airplanes in their own garages—even more surprisingly, they fly them,” he quipped.

“I wanted to design an airplane and share it here at Oshkosh,” he said.

“The work that’s been done by Honda is nothing short of marvelous,” he said of the airplane’s interior. “This is something that the bizjet community has been looking for.”

The HondaJet was to fly at the afternoon airshow on July 28, and it remains on display all week at AirVenture. 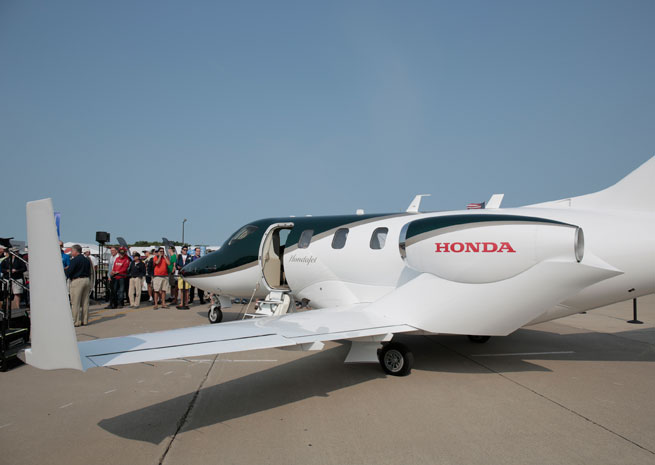 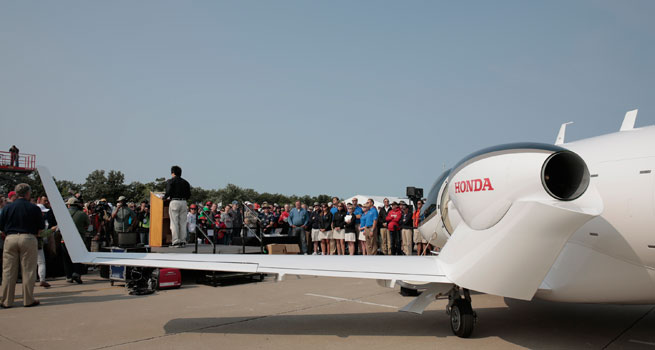