Get the app Get the app
Already a member? Please login below for an enhanced experience. Not a member? Join today
News & Media DeltaHawk flies diesel-powered Cirrus SR20 to Oshkosh

After six hours of cruise flight from Florida to Fond du Lac, Wisconsin, DeltaHawk Diesel Engines’ 180-horsepower diesel-powered Cirrus SR20 still had one hour of reserve on board, pilot Nate Zucker said, despite having a 55-knot headwind part of the way. Zucker, a Cirrus standardized instructor and an aerospace engineer, is helping flight test the proof-of-concept engine. Zucker and DeltaHawk Chief Technology Officer Doug Doers flew the aircraft to Oshkosh at altitudes between 3,500 feet and 6,500 feet.

DeltaHawk officials wouldn’t release performance information from the flight because the engine is early in the flight testing phase, but they said it is projected to rival a normal Cirrus SR20’s performance and consume 30 percent less fuel. The two-stroke, single-lever control engine will offer cruise power at about 2200 rpm, and a red line of 2650 rpm, and have a minimum TBO of 2,000 hours. Zucker said that the aircraft currently has a Hartzell aerobatic propeller, which inhibited the aircraft’s speed performance. Without disclosing any numbers, Zucker hinted that finding the right propeller for the engine would add several knots to its cruise speed. Fitted with a DeltaHawk engine, the aircraft weighs 10 pounds less than a standard SR20 with a Continental IO-360-ES 200-hp engine.

DeltaHawk President Dennis Webb said he expects to receive FAA certification in mid-2015. It already is working on installations on 41 aircraft worldwide. The company expects to hire up to 200 employees and will begin producing a non-certified version of the engine at the end of this year. 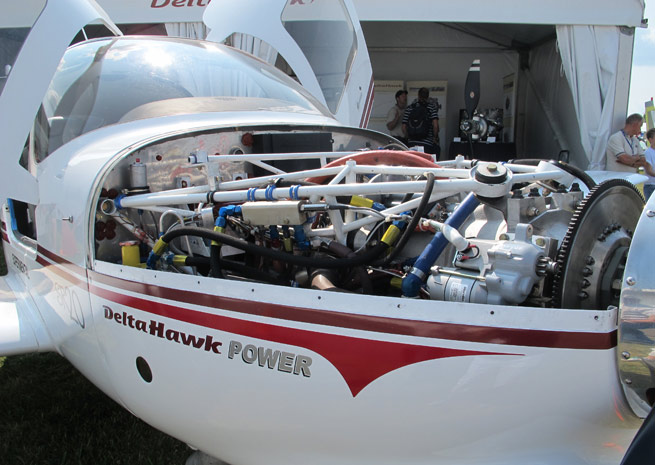