It was a big day for the newly resurrected Mooney International Corp. Mooney president Jerry Chen handed over the keys to the first airplane to roll out of the Kerrville, Texas, manufacturer’s newly reactivated factory site. The airplane, a $699,000, 280-horsepower, Continental TSIO-550G-powered Mooney M20TN Acclaim Type S, was put up for auction by Mooney at this year’s Sun 'n Fun 2014. The winning bidder for the 242-knot, top-of-the-line Mooney was Ricardo Pascoe of Bedford Corners, New York. His bid was for $646,000, Chen said. That's bargain among today’s new piston-single prices.

There were 107 bidders in the auction, among which 29 were determined to be financially qualified. The other qualified bidders will be offered Acclaims at a “special” price, Chen said, adding that no more than five additional airplanes would be delivered under these terms.

The company is manufacturing the 310-hp,  Mooney Ovation3 model concurrently with the Acclaim. To date, 14 new Mooneys have been ordered in the United States, and another 10 in China. At this EAA AirVenture, orders for three more airplanes were placed on the first day of the show. Mooney expects to build one new airplane a month this year, two airplanes per month in 2015, and three per month in 2016. A Beijing, China, office with its own, newly appointed vice-president of sales and marketing—Peter Claeys—is set to be established. Mooney already has an office in Chino, California, that serves as its global headquarters.

In other news, Mooney said it would partner with Redbird Flight Simulations, employing Redbird’s FMX simulators, of which three had already been purchased. Mooney also said it would build a new Mooney History Museum at the Kerrville airport, a facility that will celebrate Mooney’s past but which Chen also intends to have a strong educational focus. 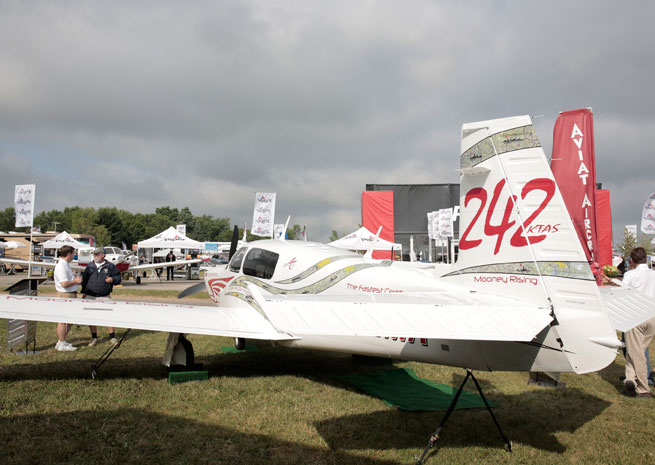