Get the app Get the app
Already a member? Please login below for an enhanced experience. Not a member? Join today
News & Media Fatal accident at Oshkosh

Editor's note: This article was updated Aug. 4 to include the names of the pilot and passenger released by the Experimental Aircraft Association, and again on Aug. 7 following release of the NTSB preliminary report.

The pilot of a custom-built Breezy died from his injuries after a landing accident at Oshkosh, Wisconsin's, Wittman Regional Airport on July 31, the Experimental Aircraft Association said. The passenger remained in serious condition at a local hospital.

Firefighters and medical personnel responded within seconds, knocking down a post-crash fire. The aircraft occupants were transported to area hospitals shortly after 9 a.m. James Oeffinger, 74, of Versailles, Kentucky, died in the hospital a few days before he would have turned 75; his passenger, Jennifer Woloszyk, 21, of Elmhurst, Illinois, was expected to survive.

Circumstances of the accident were still under investigation, and EAA spokesman Dick Knapinski said air operations, halted immediately after the incident, resumed shortly after 10 a.m., starting with the busy airport (and home of EAA AirVenture) releasing departures.

Knapinski said the two occupants were conscious and alert as rescue crews arrived at the scene, and transported to a local hospital for treatment.

Witnesses who saw a plume of smoke and flames higher than the tops of military trucks parked nearby said fire crews responded very quickly, and had the fire knocked down in seconds, with little more than a single blast from the hose required. Knapinski said the airport was quickly reopened in part because both the FAA and NTSB had several staff members on the field for the show.

The NTSB released a preliminary report on the crash Aug. 6, which includes the facts and circumstances but no indication what caused the accident. The amateur-built Zimmerman Breezy (being operated as a personal flight) touched down on Runway 36R and "appeared to bounce during the landing roll," the NTSB report states. The Breezy then veered right off the runway and struck armored vehicles parked near the airport perimeter.

A post-crash examination revealed significant damage to the aircraft, the NTSB report states, though there were no immediate indications that a mechanical problem existed prior to the incident. The weather reported at the time of the crash indicated a wind blowing 300 degrees at 6 knots, with clear skies and 10 miles visibility.

The crash was the first serious incident on the field during AirVenture (which makes KOSH among the busiest airports in the world) since 2010, when NASCAR team owner and pilot Jack Roush was seriously injured in a crash. An F-16 runway overrun was widely reported in 2011, but the pilot was not seriously injured. Local media reported another crash on Wednesday resulting in injuries that were not life-threatening: A light airplane crashed approaching the Hickory Oaks Campground airstrip, injuring two brothers who were arriving from Kentucky.

Thousands of aircraft of all shapes and sizes come and go during the week of AirVenture, and Knapinski said the fact that recent years have been free of serious incidents or accidents is a testament to the cooperation between controllers, pilots, volunteers on the ground, and various agencies involved. 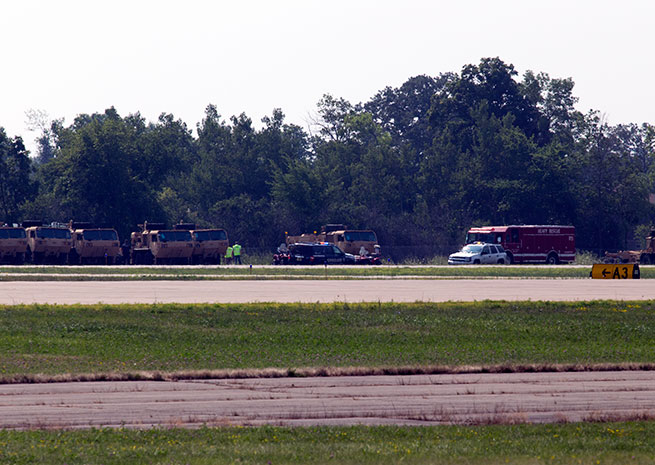