Get the app Get the app
AOPA will be closed July 4th, in observance of the Independence Day holiday. We will reopen at 8:30 am ET on Tuesday, July 5.
News & Media P&E Never Again: Flying the beam

On August 21, 1961, I was making a night instrument flight into Birmingham, Alabama. My airplane was an Army de Havilland Beaver.

Birmingham still had its obsolete four-course low-frequency navigational beams in place. This archaic navigation system required aircraft to intercept one of four designated compass headings for approaches to or departures from the airport. In Army Instrument School we had been required to become skilled in flying this instrument approach, even though it would soon be replaced everywhere with VHF omni range facilities. Each of Birmingham’s low-frequency navigational legs had a Morse code identifier. When a leg was intercepted, you heard a specific two-letter code for that leg. The signals you were listening for were either an “A” (dot-dash) or an “N” (dash-dot). When you were flying straight down the centerline, these signals merged into a steady, monotonous signal. Straying right or left of the center resulted in hearing an “A” or “N.” Pilots affectionately called this crude flying technique “flying the beam.” I was proud of my skill in following these old signals. I could navigate the old-fashioned way and make a safe low approach until I broke out of the clouds and made my landing.

About 25 miles south of the city, I planned to intercept the southbound leg and fly toward the low-frequency marker beacon. Upon reaching the beacon, I was required to turn left on that leg and go outbound to make a 180-degree procedure turn. This was a standard maneuver to maintain spacing of aircraft that were flying blind in the clouds. The procedure turn on the west leg would put me back on an easterly course toward the marker beacon, where I expected a call from approach control clearing me for a final approach into Birmingham. While still south of the city and in the clouds, I was turned over to the approach controller at Birmingham, who gave me these instructions:

“Army Five-Four-One-Seven-Zero-Six, intercept the south leg and proceed to the marker beacon. Do not turn west for a procedure turn. Report the marker beacon and turn right. Expect a clearance for a straight-in approach to Birmingham.”

“Roger. Understand I am to turn right at the outer marker and expect a straight-in approach to Birmingham, over.”

That seemed simple enough, not to mention how much time it would save me by not having to take five minutes to go left for the 180-degree procedure turn and come back to the marker beacon. Intercepting the southbound leg of the LF marker beacon was no problem. But before I reached the marker beacon, I heard another pilot make this call: “Birmingham Approach, this is Air Force jet One-Two-Three-Four-Five. I’m at the outer marker headed outbound for a procedure turn.”

“Roger, Air Force jet. Report the marker beacon when you are inbound,” replied the controller.

The Air Force jet had just flown across my flight path at nearly twice my airspeed. He was now headed west, and soon he would be roaring back to the east toward the beacon I had not yet reached. Would we both arrive at the beacon at the same time?

The FAA required all pilots flying blind in the soup to obey every ATC command without any deviation. The reason for this regulation was that we might collide with another airplane flying in the clouds. But the controller had just cleared us to fly to the same point at the very same time—to collide.

By now I had reached the outer marker. I keyed the mic and made my call. “Birmingham Approach Control, this is Army Five-Four-One-Seven-Zero-Six at the outer marker making a right turn for a straight-in approach to Birmingham.”

I made the right turn, established an approach speed of 105 mph, and began a steady descent to the minimum altitude allowed. I expected to break out of the clouds when I reached that minimum altitude and see the runway ahead. If I did not see the runway, I would have to declare a missed approach and fly back to the beacon and try again. Just then the tranquility was shattered: “Birmingham Approach Control, this is Air Force jet One-Two-Three-Four-Five. I’m at the marker beacon inbound on my final approach.”

He was likely still flying at 160 mph. This meant he was going to fly right up my tail end. Where was he?

I slammed my control wheel hard right and racked the Beaver’s wings to a vertical position. I hit the right rudder pedal as hard as I could to drop the nose as I banked the airplane to the right. Just as I started the right turn, I heard the jet’s engine noise as it went whizzing by on my left while making a hard banking turn to the left.

The Air Force pilot and I never met—either in the air or on the ground. Nor did I ever meet the controller who almost caused a midair collision. AOPA

Lester H. Hollans flew 26 different fixed- and rotary-wing aircraft for more than 2,000 hours and earned Senior Army Aviator wings. He retired from the Army Reserve in 1984 and lives in Alabama.

Digital Extra Hear this and other original “Never Again” stories as podcasts every month on iTunes and download audio files free (www.aopa.org/never_again). 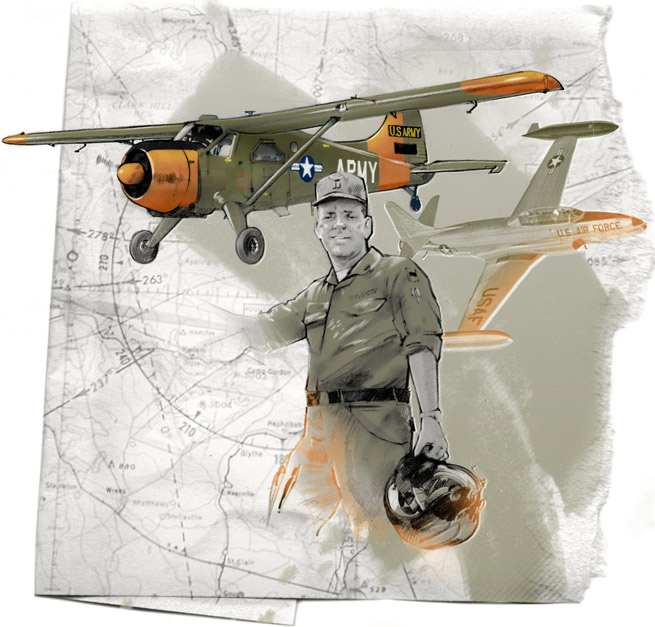 On August 21, 1961, I was making a night instrument flight into Birmingham, Alabama. My airplane was an Army de Havilland Beaver. With its 450-horsepower Pratt & Whitney R-985 radial engine and its long, high-aspect-ratio wings, flying on instruments in the clouds was not a challenge, but a joy. My logbook shows that the aircraft was a 1955 model with a tail number of 541706.