Get the app Get the app
News & Media P&E Ownership: Birth of a blade

P&E Ownership: Birth of a blade

When discussing MT-Propeller’s line of natural composite propellers, you might be tempted to say, “Everything old is new again.” But you would be mistaken. 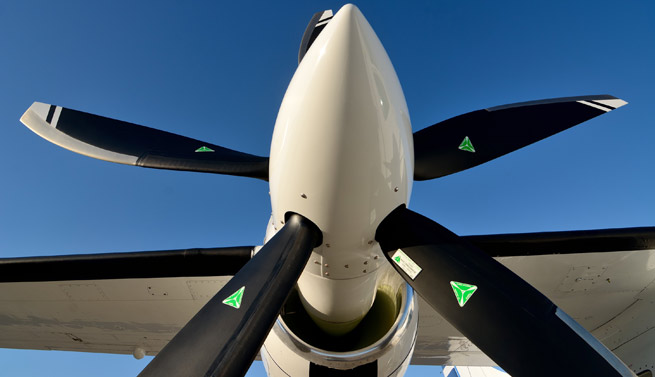 When discussing MT-Propeller’s line of natural composite propellers, you might be tempted to say, “Everything old is new again.” But you would be mistaken.

“Our natural composite propeller blades are based on wood,” said Gerd Muehlbauer, founder, president, and CEO of the German propeller manufacturer. “We have a specially prepared blade root which is wood compressed under high pressure and temperature, with resin; it’s a double-density beech veneer and it has the strength of steel. This is connected to the outside portion of the blade, the aerodynamic portion of the blade, which is made from spruce. The entire blade will be covered with either Fiberglas, carbon fiber, or Kevlar to provide the necessary stiffness and strength. The major load-carrying member is the wood.”

These modern wood-core propellers can be used in any kind of weather, he added. “The way we process this wood and laminate everything together is different from what people usually think you can do with wood. It’s a high-tech product and it has nothing in common with the old wooden propellers which were around since 1903, since the Wright brothers.”

And they can take rapid temperature changes—descending, for example, from well below freezing at Flight Level 300 to a landing someplace like Phoenix, “where you have a temperature of plus 40 Centigrade—I’m a metric guy, you know,” Muehlbauer laughed. “Our propellers are flying everywhere on earth, from the Arctic to China to the desert.”

The concept behind the composite blades goes back to 1927, he said. “In World War II, many German airplanes flew with wooden blades,” including many Junkers Ju 88s, Muehlbauer said. He’s read many reports from people who did extensive research for aircraft manufacturer Focke-Wulf, which primarily used wood propellers. “The wooden blades outperformed the metal blades in those days. What’s new and different is the materials we use today,” he said. Then, the wood was covered with cloth fibers; now, it’s modern Fiberglas or carbon fiber. Blade design also has improved, and now utilizes thicker airfoil sections developed in the 1970s.

And manufacturing is radically different. Wood veneers—basically, thin slices of wood—are alternated with resin or glue, and placed in a hydraulic press to laminate. After a heat treatment to relieve stresses, excess material is removed, then industrial computer numerical control (CNC) machines mill and smooth the blades to within 0.5 mm of final thickness. “There’s still a little bit of hand work—the machines aren’t perfect,” Muehlbauer commented.

Steel or nickel leading-edge strips are fitted, then the Fiberglas or carbon fiber covering is applied by hand; orientation of the fibers—like that of the wood grain—is important to the strength of the final product. The Fiberglas is sanded; filled; primed; filled; and, finally, painted. After inspection, the blade is ready to be installed in a hub and shipped.

The company makes a small number of pure composite propellers, mainly for Red Bull, “because the pilots wanted it. We have it, and we have it certified—[but] it costs between two and three times a regular propeller and it provides no advantage.”

Muehlbauer was hired in 1966 as a mechanical engineer at Hoffmann Propeller, headquartered at Rosenheim in Bavaria, Germany. “Ever since, I have been designing propellers. I’m not certain how many, probably at least 50, and most of them are certified.”

He became the chief engineer and by 1980, decided to start his own business. “The owner of Hoffmann Propeller was no longer a Hoffmann. He was not enthusiastic about designing propellers—it was all about the cost.” Muehlbauer launched MT Propeller on January 1, 1981, with five people; today the company employs more than 100. In addition to the factory and service center in Straubing, Germany, it operates a service center in Deland, Florida. More than 40 independent service centers also serve as distributors.

MT makes propellers for airplanes from ultralights, motorgliders, and LSAs up to large turboprops. The biggest prop currently in production is for the British Aerospace Jetstream 41 airliner, and is nearly 10 feet in diameter. Propellers also are made for hovercraft, wind tunnels, and other applications.

Muehlbauer has been working since 1972 to reduce propeller noise, primarily by using multi-blade propellers. “Everybody was laughing at me—this idiot wants to make three-blade props, and I was already thinking about four blades.” More blades allow a smaller diameter, which means less noise. “Now I’m talking about designing six or seven blades, just to see how far this can go. This principle works, and also reduced the blade loading. This means less vortexes, which means less noise. Four blades is not enough—but we don’t know what is enough.” He does not like even blade numbers because of vibration concerns.

The company originally focused on experimental and aerobatic airplanes, and Muehlbauer “did not necessarily foresee” the move into the turbine world that followed endurance testing on a Piper Cheyenne 400LS’s Pratt & Whitney PT6s. “This was the basis for moving into the turboprop business with the five-bladed propellers,” he said. Now the company offers propellers for many models of the Beech King Air, Cessna Caravan and 425, Mitsubishi MU–2, Pilatus PC–12, Piper Cheyenne and Meridian, and others.

And that five-blade turboprop propeller design is Muehlbauer’s favorite. “They are really a nice design—and successful.”

Video Extra: Tour the MT-Propeller factory in this online video.