Get the app Get the app
AOPA will be closing at 2 pm ET on Friday, July 1, in observance of the Independence Day holiday. We will reopen at 8:30 am ET on Tuesday, July 5.
News & Media P&E Proficiency: Bulk up

Flying to an airport in Class B

Many pilots consider Class B the exclusive domain of bigger, faster aircraft. 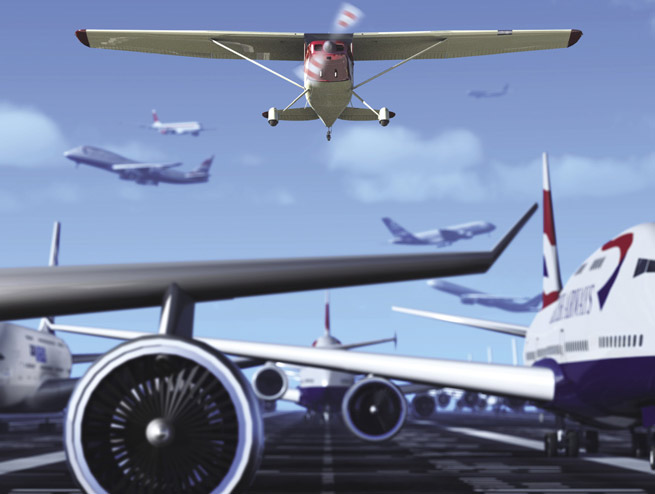 Airspace of defined dimensions within which air traffic control service is provided.

Many pilots consider Class B the exclusive domain of bigger, faster aircraft. If you’re one of them, I understand your trepidation—but landing at a big airport is something every pilot should do (see “Proficient Pilot: In the Thick of It,” July 2014 AOPA Pilot). It requires a bit more planning than flying to the next county for pancakes, but, as Chicago pilot Grant Prellwitz said, “Let’s remember that these airports are for all—not just the airlines.”

Let’s start with FAR 91.131. Private pilots can operate civil aircraft at almost all airports in Class B airspace (which we’ll henceforth call “a Class B airport”). So can recreational pilots and sport pilots, if they have received appropriate ground and flight training and received an instructor sign-off. For student pilots flying solo, it gets a little more specific: The ground and flight training has to be specific to the intended destination airport, and the instructor endorsement must have been within 90 days prior to the date of the flight.

Twelve Class B airports, listed in Aeronautical Information Manual Chapter 3-2-3, require the pilot in command to be at least a private pilot.

Unless authorized by air traffic control, the airplane must be equipped with a two-way radio plus a transponder with altitude encoding. For IFR operations, there needs to be an operable VOR or TACAN receiver.

Where will you go?

Which airport will you choose? That’s up to you, but some airports in Class B are known to be more GA friendly than others.

While he was living in Arizona, Neil Bradon flew VFR in a Cessna 172 to Phoenix Sky Harbor (PHX) five times. Each time, he says, he received good service and friendly treatment from the air traffic controllers. “I’ve always expected to hear a ‘You want to land a Cessna 172 there?’ reply from ATC, but it never came,” he said.

Grant and Leslie Prellwitz have landed a Cessna 172 at Chicago O’Hare International (ORD), a notoriously not-so-GA-friendly airport—but they filed IFR and planned their arrival for around 10 p.m., after the main “push” of commercial traffic. It’s a smart idea to avoid those high-traffic, high-stress times. You can find out when that is for your destination by contacting the local approach control facility.

Prep work on the ground will prevent perspiration in the air. Review a current terminal area chart and a taxiway diagram, paying close attention to any hot spots, or areas that present a potential risk of collision or runway incursion. These are designated on Jeppesen diagrams and also described in the Airport/Facility Directory and on government charts.

While you’re reviewing the diagram, note the location of the FBO you plan to visit. Is there a landing fee? (Probably.) Take time to brush up on airport signs (see “Resources,” page 114). Check to see whether the airport has specific VFR procedures, found in notices to airmen and the AF/D.

In the air, remember that VFR aircraft cannot enter Class B airspace without a clearance from approach control. Keep radio communications brief and professional, and one ear tuned for your N number. Do not enter unless you have been cleared to enter. Ask for clarification if unsure.

As you approach the airport, your situational awareness needs to be on high alert. ATC may be sequencing you amongst bigger, heavier traffic, which means wake turbulence is a real concern. Where are you in relation to those jets? Keep your approach higher and faster.

You may be directed to a 10,000-foot runway. Land long to prevent a situation in which you touch down on the numbers and then taxi for a long, long time. The Prellwitzes discovered that “even though we had said we would land long and didn’t pull back the power until the numbers, we were down on the first third of the runway, because a 172 slows down pretty well,” said Grant Prellwitz. Stay high, fly halfway down the runway, and then reduce power to idle to be above turbulence from the heavies, he recommended.

Once on the ground, keep that taxiway diagram out, write down taxi instructions, and ask for progressive taxi instructions if you need them. As you taxi, be cognizant that “not [every sign] you see on the airport side is meant for airplanes,” Prellwitz says, referring to service roads.

When it’s time to leave, you’ll contact clearance delivery for a departure clearance, then ground control for a taxi clearance. Again, keep that diagram out and write down all clearances for a good readback unless ATIS directs otherwise.

Big airports aren’t everybody’s idea of a good time, but mixing it up with the big boys and girls is undeniably a confidence builder. “Nothing beats landing at a Bravo and seeing all those jets waiting in line!” said Bradon.