Get the app Get the app
Already a member? Please login below for an enhanced experience. Not a member? Join today
News & Media Weather Watch: Gusts and squalls

A gust front at EAA’s AirVenture in 2011, about to attack AOPA’s tent site. 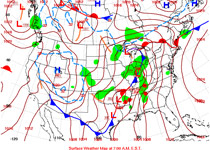 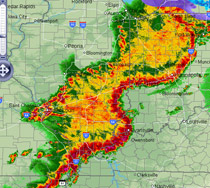 A surface analysis chart (far left) shows two pre-frontal squall lines in action—one over Arkansas, the other running from Ohio to Alabama. A Nexrad radar image shows an especially aggressive squall line (left) containing the bulging leading edges indicative of bow echoes, which can produce winds as high as 100 knots. Be sure to do a preflight check of convective sigmets for mention of any squall lines.

A gust front at EAA’s AirVenture in 2011, about to attack AOPA’s tent site. Although the gust reached 50 mph, there was no damage to our display area—but a lot of blowing dirt.

What’s worse than dealing with a mean, fast-moving cold front? Dealing with two of them, one right after the other. This is a good conceptual model for understanding the dynamics behind gust fronts and squall lines, which often precede convective cold fronts or mesoscale convective complexes (MCCs).

Think of gust fronts as not-so-subtle advance warnings of a thunderstorm or cold front to come. Cold, descending air from the parent storm or front hits the surface, and then this downdraft spreads out, forming what’s called an outflow boundary. Think of aiming a garden hose at the ground, and the perimeter of water spreading ahead of the horizontal flow this creates. Warmer air ahead of this outrush of cold air is forced upwards, creating a mini-cold front of its own. Many times the rising warm air at the leading edge of this gust front cools to the point of saturation, creating ominous-looking arcus, or shelf, clouds. If there’s enough lift and forward motion within it, the shelf cloud can form into a roll cloud.

Gust fronts are really bad news for several reasons. First of all, depending on the moisture and saturation levels within the boundary zone, the front may or may not contain enough precipitation or rainfall to be detectable by radar, so your in-cockpit datalink weather display may not show it (although Doppler radar can detect dust, dirt, and debris that’s kicked up by a gust front). Even worse, in drier climates and low-dewpoint conditions—the western states come to mind—there may not be enough moisture to generate any clouds, making it difficult to visually identify and avoid them. In moisture-rich gust fronts, entire new lines of thunderstorm cells may crop up.