Get the app Get the app
AOPA will be closed July 4th, in observance of the Independence Day holiday. We will reopen at 8:30 am ET on Tuesday, July 5.
News & Media Mentor Matters: Approach loading tricks

Choosing how to load an approach isn’t always straightforward

The seemingly simple act of loading an approach into a modern flight deck has a few subtleties that can cause problems for even experienced pilots.

Reproduced with permission of Jeppesen Sanderson, Inc. NOT FOR NAVIGATIONAL USE © Jeppesen sanderson, inc. 2014

The seemingly simple act of loading an approach into a modern flight deck has a few subtleties that can cause problems for even experienced pilots. Nearly every approach in existence offers multiple transition options, and selecting the correct one isn’t always straightforward. What’s more, both Collins and Garmin systems present a vectors-to-final (VTF) option when loading an approach that may reduce workload if things go as anticipated—yet raise workload when they don’t.

Transition choices are presented differently in Collins- and Garmin-powered flight decks. Garmin tends to give a long list of possible transitions, encompassing initial approach fixes (IAFs) as well as en route fixes with published transition routes to an IAF. In contrast, Collins avoids duplication of transitions. For example, on the RNAV (GPS) Runway 16 approach to Portsmoth, New Hampshire (PSM), the Manchester (MHT) VOR can be used to transition to the ITAWT IAF; thus, only MHT will be presented as a transition choice. In contrast, a Garmin system would list MHT and ITAWT separately.

As Collins systems do not provide a menu selection that “activates” an approach (as Garmin decks do), there is no extra workload when it comes time to select direct-to ITAWT with the MHT transition loaded than if an ITAWT-only transition were provided.

Where extra workload is created, however, is when searching for the correct transition—it is impossible to know which transition to load without looking at an approach plate, whereas for a Garmin system an instruction to “proceed direct ITAWT for the RNAV 16” can be executed without first referencing the chart.

Take the case of the ILS 24 into Odense, Denmark. If radar vectors are unavailable, there are three possible transitions to the approach, depending on the direction from which the aircraft approaches the FE IAF. Garmin platforms simply list three separate instances of “FE,” with no differentiation as to which transition will result with a given FE selected. The only way for the pilot to be sure they have the proper transition selected is to view the approach preview on the multifunction display (MFD).

This preview occurs automatically if the procedure is loaded on the MFD of a G1000-based platform, but must be manually selected by the pilot on G3000/G5000 systems. In contrast, Collins systems label the transitions differently: “FE” for the racetrack (hold) reversal, and “FEN” or “FES” for the north or south base turn (teardrop) reversals, respectively.

A final issue to consider: Out of an abundance of caution, many pilots have developed a practice that eschews loading an approach with vectors to final as the transition. These pilots have learned through experience that loading an approach via VTF occasionally necessitates a reload of the approach, often during a busy phase of flight, if ATC directs the aircraft to navigate to an approach fix. In many areas of the country, even when vectors onto the final will ultimately be provided, ATC may begin transitioning an aircraft towards the approach course by having them proceed directly to an IAF or IF.

Many pilots elect to always pick a transition for the approach, even if vectors are likely. Flying at 180 knots in the terminal area, a light jet will cover three miles per minute, so every second of fumbling through pages raises the cockpit stress level. It is straightforward to change an approach that was loaded with a transition into a vectored approach; the reverse is often impossible without a complete reload. 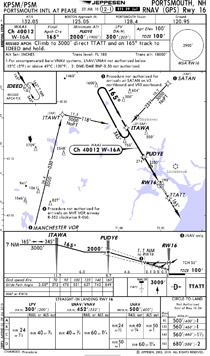 If ATC clears an aircraft to ITAWT for the Portsmouth RNAV 16 approach (above), Collins systems require the pilot to know that the Manchester VOR precedes ITAWT on the transition. Garmin flight decks will present ITAWT as a loadable transition. 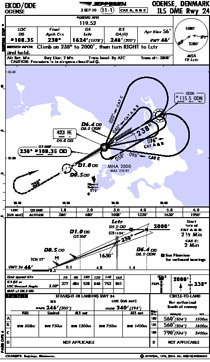 Those various course reversals are not only confusing on the plate; Garmin flight deck approach pages don’t provide guidance for which FE transition to load for the reversal you want.