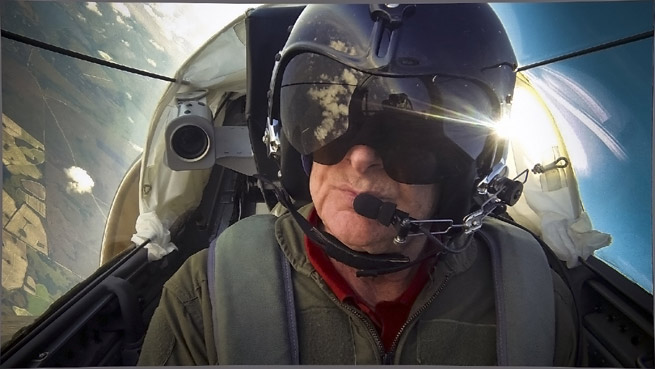 You’re going to learn two things in this article, and both are upsetting. First, I flew an Aero Vodochody L–39 trainer jet and a North American P–51 Mustang fighter on the same day, and you didn’t. It was my job; someone had to do it. Second, techniques you learned in smaller aircraft for recovering from unusual attitudes don’t work as well for larger aircraft. You weren’t taught wrong; it’s just that you need to learn different procedures for larger aircraft.

Primary student pilots would have to strap on parachutes even to attempt the maneuvers used during the two-day Unusual Attitude Training course given at Stallion 51 in Kissimmee, Florida. Even then, given the lack of experience, they just might get their instructors in an unpickleable pickle. It is recommended that you have 500 hours of flight time as a prerequisite. 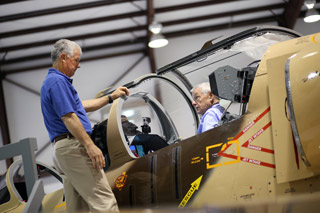 Most of us spend our flying years in a narrow range of comfortable flight attitudes. That happy place is defined by Stallion 51 owner Lee Lauderback as no more than 25 degrees nose up, 10 degrees down, and 45 degrees of bank. More extreme attitudes have fooled even career pilots into making the wrong decision. Lauderback and his instructors try to stretch your comfort envelope to 60 degrees of bank, 45 degrees nose up, and 30 degrees nose down. They also calibrate your brain to recognize gravity forces three times normal (3 Gs), because that’s all most corporate aircraft can take without structural damage.

It’s also important to know how to use the miracle of less than one G, because the aerodynamic stall speed is lower then. It’s zero knots when the aircraft is at zero G and 30 to 40 percent lower at a half G, Lauderback says. By intentionally making the aircraft lighter than normal gravity, the airplane can continue to fly well below its normal 1-G stall speed.

I asked for just a sampling of the two-day course that had former airline pilot John Posson, medical examiner and L–39 pilot Dr. William “Doc” Busch, and 20,000-hour-plus pilot Lauderback blasting through presentations in minutes that normally take hours. Busch has medical examination rooms at Stallion 51 and can renew your FAA medical certificate on the spot. The flights were somewhat abbreviated, too, but probably most galling to you, my instructions for the Mustang flight were to place the priority on fun. Sorry about that. First up was the L–39.

Helmet chin strap against my chest, eyes closed, Lauderback is up front in the Czech-designed tandem-seat L–39 messing with my attitude, but I think I know what he’s doing. “You’re going left,” I say over the intercom. (Should have kept that to myself.) Lauderback stealthily reverses the single-engine jet’s diving roll until he is instead nearly inverted to the right. “Your airplane,” he says.

I apply control inputs based not on an analysis of the Garmin electronic flight display (step one for any recovery), but on what I had imagined with eyes closed, rolling to the right to reach the nearest horizon. It wasn’t there. I hate it when that happens. Now we’re dropping out of 14,000 feet above Central Florida’s Avon Park Air Force Range with nothing in sight but ground. It takes wasteful seconds to pull the nose through all that ground clutter and upwards to the horizon, all the while being careful not to exceed 3 Gs.

Recoveries in larger aircraft need to be a classy affair—more like a smooth ballet, to avoid stressing the airframe. That’s especially true with the recommended correction for an extreme-high-nose attitude, one you won’t experience at the local flight school. 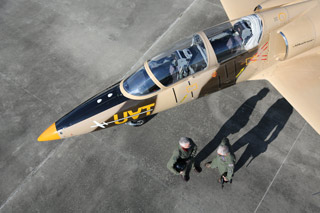 Lauderback takes the controls and has me pull a white curtain forward from the back of the canopy, attaching it with elastic loops to hooks at the front. Then I unfurl a small panel and block my forward view directly above the instrument panel. Nothing to watch anymore except that electronic flight display. Eyes closed. Chin on the chest.

“Your aircraft,” Lauderback says. The flight display is all blue, meaning the airplane is aimed at the sky—no telling where the ground is. The wings of the aircraft icon are tilted left at a steep angle. Power up!

I increase the bank to 90 degrees, neither pulling nor pushing on the control stick. If I were to push, the nose might not reach the horizon before the jet slows to an aerodynamic stall. Even if it does, there are imaginary people and plates of food in the back that don’t need to float just now. That includes the blue water in the imaginary lavatory.

Gravity does the job and the nose drops to the horizon. We’re below stall speed, but because we are also at less than one G, the airplane keeps flying. I let the nose descend below the horizon to build speed and consider raising it back to level flight. Just then I look at the angle of attack indicator above the instrument panel. All the safe green chevrons, indicating the airplane wing is safe from stalling, are gone. All but one of the cautionary yellow chevrons are gone. Above them—only red chevrons remain, and if I pull nose up, the jet will quickly stall. “I can’t pull yet,” I tell Lauderback.

Lauderback is pleased. “We should have put you under the hood to begin with,” he says. All the while he had watched me on a panel-mounted television screen, making sure I wasn’t reaching for the blue airsickness bag to my right. In the back of my imaginary business jet, the food stayed on the tables because we still had a half G (an in-flight video indicated 0.4 G during a postflight debriefing), and the people stayed in their seats.

Next up—a flight in Crazy Horse2, a name meaning crazy Mustang, crazier to the second power than Lauderback’s other Mustang, also named Crazy Horse without the superscript “2.”

Craziest horse of all

The engine shakes itself awake followed by what sounds like a dozen Harleys firing up as one. “Oh, yeah, there it is,” Lauderback says. Earplugs are a nicety in the pressurized, air-conditioned L–39 but a necessity in the growling P­–51. It’s a flying tank made nimble by a 1,700-horsepower 12-cylinder Merlin engine that weighs as much as a fully loaded Cessna 152. I am shoehorned into the back cockpit where, before modification, a fuel tank used to be, but no problem; I had spent the previous year losing 45 pounds just for this flight. The gym even bragged about me in the local newspaper.

“Wind is almost down the runway. You won’t have any excuse on your landing, Al,” Lauderback said. A frontal passage the previous night left strong winds in its wake. “Your landing, baby,” I answered, adding, “Crosswind, tailwheel airplane.”

“We’re going to have to negotiate that one,” Lauderback said.

Lauderback adds partial power until the airflow over the rudder becomes effective, then increases power to 55 inches of manifold pressure, demonstrating the takeoff and making a low turn above videographer Paul Harrop and photographer Chris Rose.

Back above the Air Force range, I lower the nose to 260 knots before pulling 3 Gs into a half-Cuban—that is, three-quarters of a loop followed by a 45-degree descent upside down. I avoid placing any G forces on the airplane, and push hard to the left to roll upright, then check to assure the speed is above the aerodynamic stall speed and recover to level attitude.

I repeat the maneuver a few more times, always rolling left. “There’s a man who likes to roll left. Do you ever roll to the right?”

“Oh, c’mon. Nose down. I’ll make you roll right.” Two more maneuvers end with us upside down, and I roll to the right each time to recover. Lauderback reasons that two halves equal one full roll to the right, so we can go home.

Except maybe there is time for just one last barrel roll—this one to the left. Lauderback directs a pull to 45 degrees nose up in the general direction of Kissimmee, where I unload the control forces on the stick and roll through inverted and back to level flight. OK, now we can go home.

Either he is going to land, or he is going to trick me into landing. During the descent Lauderback calls for two power reductions, saying, “Whoa, horsey.” We’re still going 200 knots.

Landing procedures call for an overhead break, meaning we fly down the runway 1,000 feet above the ground, and then turn 180 degrees to parallel the runway on the downwind leg of the traffic pattern. “We’re going to land a little long on purpose, OK?” Lauderback is showing no interest in taking the controls.

Rolling out on final approach, a bird skitters by 50 feet above the canopy as I pass through 200 feet at 110 knots.

“Ease the power out. Ease the power out again. Do not flare.” We’re above the runway. “Put the left wing down a little. More right rudder—more, more.” The left wheel skims onto the runway at Kissimmee followed by the right. Within seconds the tailwheel touches.

“That’s a 10-pointer,” Lauderback says. “Wish I could claim that.” The landing is over, and he didn’t do it—meaning he won the negotiation that I don’t recall having. 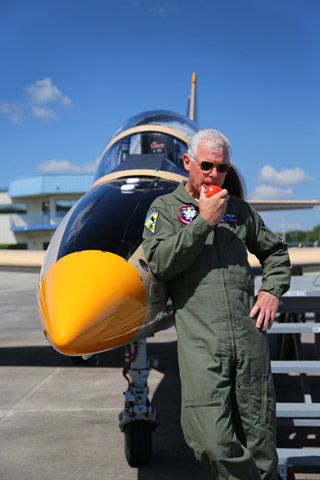 Video: Fly along with the author.

Unusual attitude training for jet crews is suported by a 1996 recommendation from the NTSB and by the FAA’s “Airplane Upset Recovery Aid,” issued in 2004 and revised in 2008.

How does Stallion 51 owner Lee Lauderback stay fit? He walks a quarter mile, then runs, and continues that regimen until he has gone 1.25 miles. He also avoids red meat, preferring instead to eat fish, such as salmon, and poultry.

First couple of the Mustang

Lee Lauderback, who flew for Arnold Palmer, and Stallion 51 operations chief Angela West, his fiancée, could be called the “first couple” of the Mustang community. West organized two “Gathering of Mustangs and Legends” that brought together P–51s and the legends who flew them. Lauderback and West are trained falconers and keep two falcons at their headquarters at Kissimmee Gateway Airport, Florida.