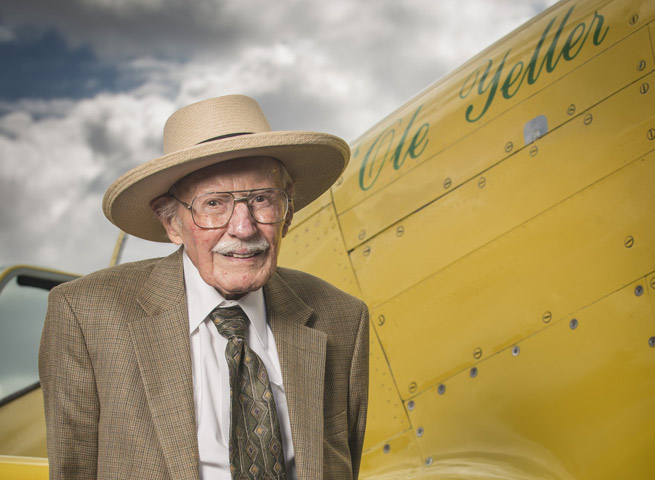 Listening to Bob Hoover tell the stories of his life, one is apt to wonder Is this for real? For the legendary test and airshow pilot’s stories are larger than life—just like the man. Every pilot has a favorite Hoover story: performing a barrel roll while pouring a glass of iced tea; his tanks filled with jet fuel instead of avgas leading to design of the Hoover Nozzle; his medical certificate revocation—and reinstatement; rolling and looping a Shrike Aero Commander; his famous radio call: “Gentlemen, you have a race” at Reno; teaching pilots in the Korean war how to dive bomb; and his escapades in World War II.

The young Hoover at first was so airsick when he flew, he feared his dreams of flying were over before they even started. “I loved the idea of flying since I was six or seven years old. I thought wouldn’t it be wonderful to fly. I dreamed about it,” he recalls. “I soloed at 16 after eight hours; 15 minutes each weekend. I was so worried about getting sick. But I just had to overcome it.”

Later, enlisting for World War II at the age of 18, his dream to fly in combat also was nearly dashed. “When I enlisted the physician said I hate to tell you this, but you need to read the bottom of the eye chart. I’m going to leave the room for 20 minutes. When I come back, let’s see if you can read the chart. I memorized that chart,” Hoover says. “Later he told me he’d made the best decision passing me.”

He made a daring escape from a POW camp in Germany. “I was shot down and captured February 9, 1944. I made several attempts at escape and spent time in solitary confinement,” he says. “After 16 months I escaped and flew to the Netherlands in a Fw190.”

After the war, Hoover became a test pilot for North American Aviation, testing and flying its most famous aircraft—including the F–86 Sabre and the P–51 Mustang. His own Mustang—N51RH, known as Ole Yeller— is now based at Legacy Flight Museum in Idaho. Hoover was awarded military honors including the Distinguished Flying Cross, Soldier’s Medal for Valor, the Purple Heart, and French Croix de Guerre. He is an honorary member of the Blue Angels and the Thunderbirds, was awarded the Smithsonian Institution’s National Air and Space Trophy in 2007, and an honorary doctorate by the U.S. Air Force Test Pilot School in 2010. He met Orville Wright, and Col. James H. Doolittle once called him “the greatest stick-and-rudder pilot who ever lived.”

Now 92, Hoover continues his amazing aviation adventure. He established Bob Hoover’s Jet Center in Van Nuys, California. Of his flying life, he says, “I had some mishaps that I don’t mind admitting were terrifying, but I got back into the cockpit and pressed on. I did what had to be done.”

Hours | “Not as many as you’d think—I was testing most of them.”

Extra | The documentary Perfecting Flight: Bob Hoover raised money that Hoover and others are using to offer
scholarships through Embry-Riddle Aeronautical University.