Get the app Get the app
AOPA will be closed July 4th, in observance of the Independence Day holiday. We will reopen at 8:30 am ET on Tuesday, July 5.
News & Media Training Tip: Volatile virga

Clouds and visibility are two of a student pilot’s most important considerations when assessing preflight weather information. It’s likely, when you first began to fly solo, that your instructor placed limitations on your solo flying ensuring that you only flew in weather much more favorable than the basic minimums prescribed for visual flight rules.

Wind speed, current and forecast—both the total wind, and a maximum crosswind component—is another customary limitation on student solos.

What about precipitation? Precip isn’t automatically grounds to cancel a VFR flight—but various cautions apply. Precip that signals the early arrival of nasty frontal weather should be seen as a warning that conditions are deteriorating faster than expected; reschedule your flight. Thunderstorms that develop during a flight must be given the widest of berths by any pilot in any aircraft.

On the other hand, light rain falling from a high overcast, with, say 10 miles visibility, consistent with a forecast expected to improve or remain unchanged, may not  ground a local-area solo flight or a dual cross-country (but watch out for fog that could form with any convergence of the temperature and dewpoint).

Suppose you are flying your cross-country route and spot ahead in the distance a shaft of rain that seems to trail off without reaching the ground. This you may recognize as virga, described as "rain that falls through the atmosphere but evaporates prior to striking the ground" in Chapter 11 of the Pilot’s Handbook of Aeronautical Knowledge.

Virga can be picturesque to behold, but don’t let its benign appearance breed complacency. A National Weather Service glossary entry on virga resembles the one cited above—but goes on to note that, "In certain cases, shafts of virga may precede a microburst."

Virga’s volatility occurs because "the evaporating rain cools the surrounding air, making it like a cold-air balloon that plunges toward the ground," explained meteorologist Jack Williams in Flight Training magazine’s "The Weather Never Sleeps" column.

That makes flight beneath virga a bad decision, "especially when close to the ground taking off or landing."

Even if conditions don’t rise to the hazard of a dry microburst—mostly a western phenomenon, Williams noted—the vertical and horizontal turbulence produced by that "cold-air balloon" would present a rude surprise to an unwary pilot. 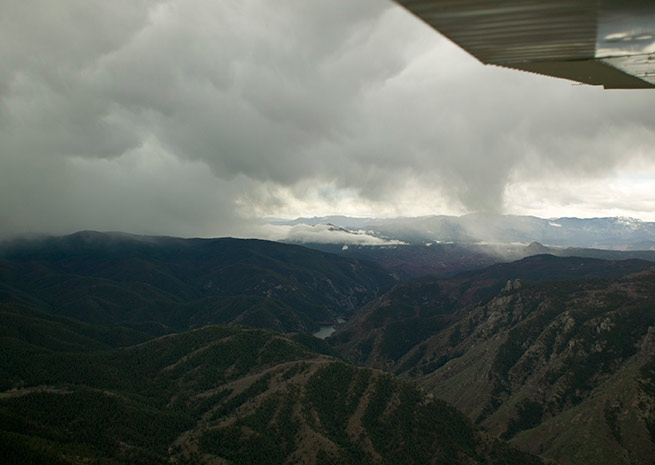