Get the app Get the app
AOPA will be closed July 4th, in observance of the Independence Day holiday. We will reopen at 8:30 am ET on Tuesday, July 5.
News & Media FBI: $10,000 bounty for laser-pointing perps

Tips for pilots to protect themselves during a laser strike

Pilot should be extra vigilant when flying at night to protect themselves from a laser incident. Being hit with a laser could not only destroy night vision or cause temporary blindness, but it also could irritate or burn the eyes and lead to a safety of flight issue.

Here are some tips from the AOPA Foundation’s Air Safety Institute, the FAA, and pilots who have experienced laser strikes to help you protect your eyes and night vision during an incident.

Don’t look at the laser beam. “The natural reaction is to say, ‘Oh look at that,’” said AOPA Foundation President Bruce Landsberg. “No, don’t do that.”

Don’t rub your eyes. According to the FAA, rubbing your eyes could cause further injury.

Divert your gaze. Helicopter pilots Jessica Ward and Chad Johnson said that diverting your gaze away from the beam, perhaps by looking out the window opposite the beam, can help maintain night vision and visual contact with the ground. Maintaining visual contact with the ground is important at the critical phases of flight—approach, landing, and takeoff—which are when the FAA says most laser incidents occur.

Slide down in your seat. Landsberg said that lowering yourself in the cockpit can help prevent you from being hit directly.

Turn up the lights in the cockpit. Landsberg said this is a practice used when flying in areas where there have been reports of lightning flashes and can be helpful. The FAA explained that this will help to minimize further effects of sudden illumination at night.

Shield your eyes. If able, use your hands or a clipboard to block the beam from shining directly in your eyes.

Look at your flight instruments. Johnson described the effect of the sudden flash of light as flying into instrument conditions. He focused his attention on the instruments and didn’t make any sudden movements when the illumination happened. Once the light was gone, he resumed looking outside, opposite the area of the beam, to maintain contact with the ground.

Use all available resources to maintain aircraft control. Depending on the phase of flight, flight attitude, and degree of disruption to the pilot, the aircraft could enter an unusual attitude. Check your instruments to return to normal flight. The FAA and Johnson also recommended turning on the autopilot to maintain a stabilized flight path while your eyesight recovers. If more than one pilot is on board, clearly communicate transfer of the controls to the pilot least impacted by the laser.

Communicate the incident to ATC. AOPA Central Southwest Regional Manager Yasmina Platt promptly reported her incident to the controller providing her with VFR flight following services. The controller, in turn, was able to warn other pilots flying in Platt’s location to try to prevent multiple encounters.

Use the aircraft. The FAA suggests climbing or turning away from the laser to use the aircraft to block its beam. Platt, who was flying a Piper Archer at the time of her incident, said that the laser beam came from the 11 o’clock position, and that as she flew, it passed under and behind her wing, blocking it from her range of sight.

The FAA offers a helpful brochure, “Laser Hazards in Navigable Airspace,” that pilots can download and carry with them, as well as a video about the hazards as shown from a cockpit simulator. 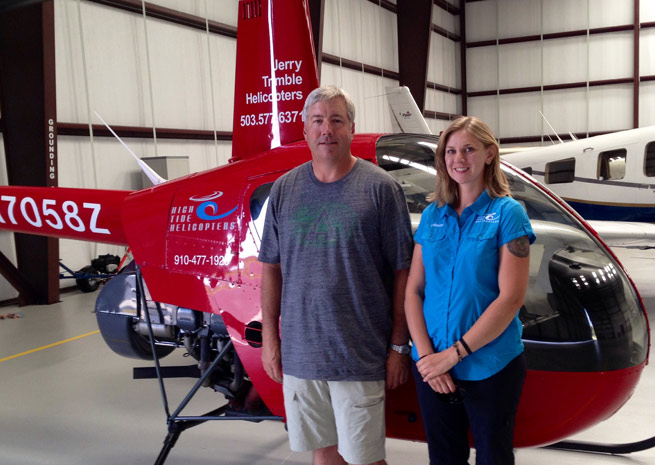 A “temporarily blinding, overwhelming” green laser flashed into the cockpit of the Robinson R22 on approach to landing at North Carolina’s Cape Fear Regional Jetport on May 6, CFI Jessica Ward told AOPA in a telephone interview. Her student Charles Johnson, a 4,600-hour fixed-wing pilot working on his helicopter add-on rating, said he relied on his instrument flying skills and didn’t make any sudden movements when the light refracted through the bubble canopy. Johnson said the reflection from the beam made it seem like it was shined directly at his face. As he continued “easing the helicopter down,” trees eventually blocked the laser so that he was able to land.

Ward and Johnson are just two of thousands of pilots who experience laser strikes each year. While they were able to help the police track down the person who shined the laser at them, the FBI is seeking help from everyone to make arrests in other incidents.

The FBI is offering up to $10,000 rewards for information leading to the arrest of those who intentionally point a laser at aircraft and seeks to educate the public on the severity of such actions. “We are also working with state, local, and international law enforcement on the campaign, and we are conducting outreach to schools to educate teens about the dangers associated with lasing,” the FBI said in a news release June 3. The program has been successfully tested in 12 locations, and is being expanded to all 50 states, Guam, and Puerto Rico.

“I would like to think if people realized the amount of danger they are causing, they wouldn’t do it,” Ward said. “They might as well point a gun at the aircraft.”

AOPA Foundation President Bruce Landsberg said the foundation is making a recommendation that the “NTSB ask the manufacturers of laser equipment to put a warning flyer in every box about the danger to the eyes of people, animals, and especially pilots,” he said. “The notice also should remind users that it is a federal offense to lase an aircraft and that there is a big reward available to those who report their illegal actions.”

Ward and Johnson were finishing his night flying requirements, with two landings left to go at the jetport. During the approach, the light came from Ward’s side of the helicopter (the left side), affecting her more than her student. Johnson couldn’t use his hands to protect his eyes from the light but diverted his gaze, looking out the right window to keep contact with the ground.

After landing, Ward and Johnson discussed whether to fly another takeoff, traffic pattern, and landing to fulfill the last night landing requirement. The two decided to proceed, but altered their pattern to turn base at midfield and land on the departure end of Runway 23, providing more separation between them and the hazard.

“That’s when it really became apparent that this was intentional and malicious,” Ward said. The laser found the helicopter again and tracked it. While Johnson focused on protecting his vision and flying, Ward tried to glance in different directions, while avoiding the beam itself, to determine where the laser was originating. Ward has lived in the area for 12 years and opened the High Tide Helicopters flight school to begin instructing there in January. She’s familiar with the town from the ground and the air and was able to spot a landmark near where the laser had originated. After Johnson landed, she called 911. (Watch a video of Ward flying the route and showing reporters the location of the incident.)

Ward described the landmark to the Oak Island Police Department and took them to the general area of the incident. According to the police report, Sgt. Mike Oxford questioned adults at the only house in the area with activity. Oxford asked for the laser pointer and if anyone had shined it at the helicopter. The adults said they used the laser pointer to exercise a dog in the front yard. Chris Funk said “he was playing with it by shining it all around, including the trees across the street and a billboard. The trees that he indicated were at the house that Ms Ward pointed out. After some conversation about the dog, Mr Funk admitted that he may have shined the light at the helicopter,” Oxford said in the police report. Oxford obtained a felony warrant and arrested Funk.

AOPA Central Southwest Regional Manager Yasmina Platt was recently illuminated by a green laser beam while flying a Piper Archer through a VFR corridor in Houston and acknowledged that the public probably doesn’t understand the consequences of shining a laser at an aircraft. “They probably don’t realize it is a federal offense, and how they can affect other people,” she said.

In 2012, shining a laser at an aircraft became a federal crime with a punishment of a maximum of five years in prison. In addition, such an act can be considered interfering with an aircraft, a felony carrying up to 20 years in prison and a fine up to $250,000. The FAA also can impose up to $11,000 in civil penalties for each violation.

Platt said that she noticed the green light on clouds near her flight path before it struck her cockpit. “Until it happened to me, you have no idea how bright those are,” Platt said. “At night, up when you’re flying, that’s bright. That’s at 2,000 feet.”

According to the FBI, a laser beam “can travel more than a mile and illuminate a cockpit, disorienting and temporarily blinding pilots.” Pilots have said the beam is the “equivalent of a camera flash going off in a pitch black car at night,” the FBI reported.

According to the FAA’s annual laser incident reports, the agency received 2,837 reports in 2010, 3,591 in 2011, 3,482 in 2012, and 3,960 in 2013. The number of incidents reported to the FAA has increased 14 times since 2005, and most occur between 7 and 11 p.m., according to the agency. However, it is not clear whether the rise in incidents is attributed to a rise in the number of people shining lasers at aircraft or if more of the incidents are being reported. In 2011, the FAA released a laser reporting Web page to make it easier for pilots and the public to report incidents.

Platt reported the incident to the FAA through that page and completed a questionnaire detailing the date, time, color, and duration of the laser strike; aircraft’s location, altitude, and phase of flight; effect on the flight; and effect on vision, among other information.

The FAA also offers a means for air traffic controllers and the public to report laser incidents, and has a mobile site to allow users to submit a report from their phones. Ward and Johnson were also asked by their local flight standards district office to submit a report detailing the event.

Additionally, pilots, controllers, and the public should report any incidents to their local FBI office or by calling 911 like Ward and Johnson.

The incident Ward and Johnson experienced happened before the FBI expanded its program, and they haven’t received a monetary reward. But, Ward said in an email that “it was very rewarding when I heard that the attacker had been identified, arrested and charged.” Another reward: Johnson passed his checkride just a few days after the incident. 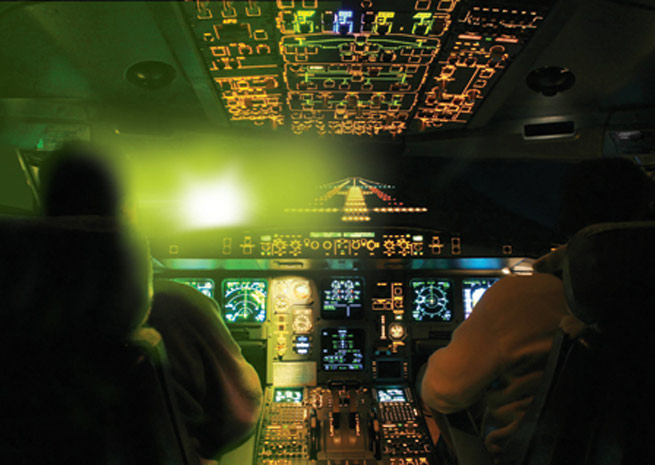