Get the app Get the app
Already a member? Please login below for an enhanced experience. Not a member? Join today
News & Media Letters: AOPA 75 Years

Our May 2014 issue was dedicated to the anniversary of the Aircraft Owners and Pilots Association, encouraging members to comment, reflect—and correct. 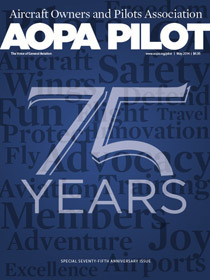 I am writing to tell you how much I enjoyed the article about the start of AOPA (“There at the Beginning”). My grandfather was P.T. Sharples. He and my great uncle Laurence are the brothers about whom Tom Horne wrote.

My grandfather was an industrialist, but it was his father that invented the cream separator. P.T. Sharples was an oil and gas man. His brother was an inventor and glass blower, among many other skills. Dear Pa (as I knew him) loved airplanes and I flew with him in several of his airplanes. I did not become a pilot until my early 40s but I stay current and look forward to owning my first airplane soon. I recently joined AOPA’s Hat in the Ring Society, as I am sure he would have wanted me to. I will share this edition with my family as I am the only current pilot of his seven grandchildren.

What a flood of memories your article on Wings Field released (“Briefing: Where It All Began”). In 1955, I was a boy (only four feet, 11 inches tall and 85 pounds), so in love with airplanes, and thrilled to be taking my first flying lesson on my fourteenth birthday.

I was still a pipsqueak on my sixteenth birthday, but I soloed, thanks to the patience of my instructor Anne Schields and everyone at Wings Field.

God bless the ground crew—allowing that young boy, so passionate about all things aeronautical—to drive the fuel truck, top off airplanes, taxi to and from the tarmac, and help stack the hangar. I was hired as summer line crew; my salary helped cover the $11-per-hour flight time on the PA–11. When it snowed, that Piper was equipped with skis!

I remember Anne Schields as a beautiful, but no-nonsense woman, a respected ex-WASP pilot who mentored that happy kid through stick-and-rudder flying out of an incredible grass field that was Wings.

In the male-dominated field of aviation, I salute all women who seek to undertake this endeavor.

“Thank you for the great tribute to aviation that was the May 2014 seventy-fifth anniversary issue of AOPA Pilot. And a special thanks for recognizing Anne Morrow Lindbergh (twice) as one of general aviation’s “firsts” and then “giants.” A recognition well-deserved, but seldom seen in aviation media.”

“You’ve been an effective voice for GA and provided us many good services. Keep it up and don’t lose sight of your original purpose in today’s melee of making money.”

“On July 3 of this year I will have been an AOPA member for 50 years. Although I missed the first 25 years, I have still been proud of my membership and what AOPA has stood for, and its successes achieved during this period.”

I enjoy Barry Schiff’s columns in AOPA Pilot and noticed something about the last question in May’s “Test Pilot.” In the answers, it was stated that Guam is the first place in America to celebrate new events such as AOPA’s birthday. I would argue that Wake Island, at 166 degrees 32 inches east, is “where America’s day really begins.” I fly C–130s in the Air Force and have lived in Guam and have also often stopped at Wake to refuel on the way to Guam (from Hawaii). The gift shop at the passenger terminal in Wake sells lots of T-shirts and coffee cups with the above quoted slogan. I think they have a friendly rivalry with Guam, since Guam has the slogan, “Where America’s day begins.”

I am becoming increasingly bothered and discouraged that everything I read or I watch on AOPA Live related to the FAA are negative comments. I understand the role of AOPA is to support its members and our freedom to fly, but it seems that its role is increasingly becoming to represent those that fight the FAA—and the only comments that are published are negative or derogatory about the agency’s performance. Nothing ever seems to be said about the magnificent job the agency does on the very wide spectrum involving general aviation and aviation in general.

Not all regulations are bad, and most of them are good and necessary. I do not appreciate excessive and unnecessary regulations any more than the next guy, but I am infinitely grateful to the FAA for its role in maintaining one of the safest airspaces in the world. There is an increasing move by some sections of our population to object to anything and everything that has to do with government regulations. Either by ignorance or motivated by special interests, they fail to understand that it is the role of the federal government to protect the welfare of the general public as a whole, and not only one segment of the population. In doing so it must regulate all activities that can represent a danger to the public or the very people performing those activities.

Having lived and flown in other countries I am grateful to our federal government and the FAA for implementing the regulations that make our skies one of the safest in the world. Surely there are areas that may need review or improvement, but given the size and population of our country and the amount of commercial, military, and private aviation activities 24/7, I think the FAA does an excellent job. The good the FAA does through the services and regulations it provides far outweighs those areas that may need review and updating, or that may inconvenience a very vocal sector of the pilot community. I wish AOPA would remind its members and the flying public of that fact with the same frequency it publishes negative and derogatory views about the agency.