Flying blind, then and now 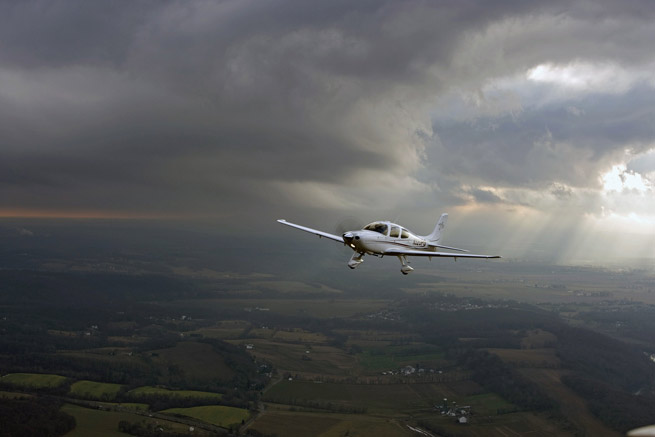 Here’s the setup. I was on a night flight in a Cessna 182, going from Florida home to AOPA headquarters at the Frederick, Maryland, Municipal Airport. Not being able to fly the route nonstop, I planned a fuel stop at the Florence, South Carolina, Regional Airport. My preflight briefing included advisories for possible thunderstorms, but it was a pretty tame flight until I reached the Charleston, South Carolina, area. Sure, I was in and out of clouds (mostly in), but the only real weather was some light turbulence.

A check with Flight Watch on 122.0 MHz revealed that a line of thunderstorms was well west of my course, but moving my way. But I figured I’d be on the ground in Florence ahead of the line’s arrival. On I flew. At my groundspeed I’d be there in about 45 minutes.

Then I was deep in the clouds, and the turbulence increased in intensity and frequency. A solid “moderate,” my head hit the roof a couple of times. But I’d been in this sort of turbulence before. It’s always annoying, but seems to be part of nearly every cross-country flight of any duration.

Then came the rain. Again, light at first but increasing to the point where the noise level interfered with voice communications. I was trying to talk with ATC as well as Flight Watch to get an idea of the thunderstorms’ locations, but the information was vague and contradictory. Flight Watch had no pireps, and ATC could only say that I was in an area of precipitation. I pressed ahead.

While fighting the turbulence in a particularly energetic cloud I happened to wonder: are my strobe lights on? But the “strobes” weren’t strobes at all. It was nearby lightning, illuminating the entire cloud. And then came the thunder. It was then that I knew for sure I was in a thunderstorm. The turbulence worsened, but by then I was talking to Florence Approach, able to descend, and being vectored for the ILS to Runway 9. Luckily, the flight ended uneventfully, even though I certainly pressed my luck.

That flight took place in 1984, but an inadvertent thunderstorm encounter like that could easily happen today, even though cockpit technology has progressed by leaps and bounds in the intervening 30 years. Think about it. Datalink weather providers such as WxWorx’s XMWX, WSI InFlight, and the government’s Flight Information Services-Broadcast (FIS-B) service provide detailed Nexrad imagery—but that information can be up to 20 minutes old by the time it reaches you. Long enough to trick you into thinking you’re flying at a safe distance from convection, when you actually could be entering zones of the highest, most dangerous areas of precipitation reflectivity.

The dangers of this delay were emphasized in a July 20, 2012, NTSB Safety Alert, available online. “Weather conditions depicted on the mosaic image will always be older than the age indicated on the display,” the alert says. The delay occurs because datalink providers must take the returns from each Nexrad site’s imagery, create a mosaic that merges each site’s radar returns into a blended image, and then transmit this information to your multifunction display, portable GPS, or tablet computer. Real-world translation: You’ll be looking at the past. And a tremendous amount of storm development can occur in just a few short minutes. The alert goes on to describe two cases where pilots acted on dated imagery, and then crashed.

Even so, like most of us I rely on datalink weather whenever convection is a factor. For general aviation pilots it’s one of the most significant weather avoidance tools ever to come down the pike, and it’s a lot more accessible, user-friendly, and portable than airborne weather radar. But I give storm cells a wide berth, and consult ATC for help when there’s a need to finalize inflight decision-making. Air Route Traffic Control Centers have meteorologists serving in Center Weather Service Units (CWSU) right next to controllers, and their expertise also can go a long way toward sound storm-avoidance tactics. Back in the day, there were no Nexrad Doppler weather radars, no CWSUs, and no private or government-sponsored datalink weather services. Would I trade then for now? No way.

Then, as now, the best strategy is to begin your situational awareness through a good preflight weather briefing; keep visual separation from any building cumulus or cumulonimbus buildups once aloft steering well clear of them; and never hesitate to deviate to an airport with better weather.