Get the app Get the app
AOPA will be closed July 4th, in observance of the Independence Day holiday. We will reopen at 8:30 am ET on Tuesday, July 5.
News & Media Power out!

Lessons from an emergency

Passing 5,400 feet we heard a muffled pow/blam, had immediate white smoke in the cabin, and a spray pattern of oil on the windscreen. I put out an immediate mayday, and opened the window to clear the smoke. 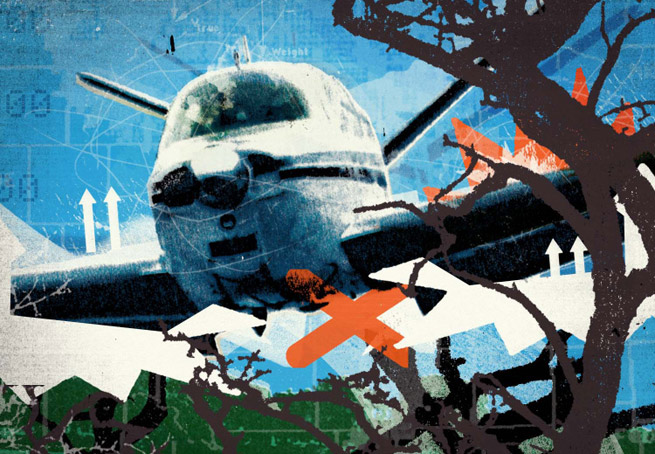 It was a wonderful, clear Thanksgiving morning and my passengers—my son and his girlfriend—climbed into our trusty V-tail Beechcraft Bonanza at Norfolk, Virginia, for a flight to Birmingham, Alabama. With the winds of the day we expected a three-and-a-half-hour flight with absolutely no weather factors. We had our baggage and a freshly cooked pumpkin pie loaded up for a reunion at our daughter’s home; my wife was already there helping to prepare the feast.

While my son is a high-time right seater, this was only the second time his girlfriend had been in a small GA aircraft. We leveled off at our filed altitude of 6,000 feet, where the temperature was 10 degrees Celsius (about 10 degrees warmer than on the ground). We had set up cruise power of 2,300 rpm, 23 inches, and a fuel flow of 16.5 gph (rich of peak). This gave us 172 KTAS into a steady 10-knot headwind. Eventually Atlanta Center requested that we climb to 8,000 feet for traffic and future terrain, so I requested VFR flight following at 6,500 feet to avoid higher headwinds up there.

As we passed north of Atlanta, we commented on how great the visibility was—we could see downtown Atlanta and even pick out Stone Mountain to the east of the city. It was one of those days. The drone of the engine put my two passengers to sleep for a short while, and I took a peaceful shot of them using my iPad mini. It was the quiet before the storm.

We crossed the Alabama border, and Center turned us over to Birmingham Approach. The ATIS told me to expect a right base entry to Runway 36—I even put the RNAV approach into the Garmin. I called up the descent checklist on the WX500 and started checking things off. We had used 54 gallons of fuel, and had 20 gallons on board—I could almost taste the turkey.

Approach cleared us to descend at pilot’s discretion to 3,500 feet, then—as expected—a 10-degree left to avoid the Runway 6 departure corridor. We waited until about 18 miles from the airport, had the outline of the airport in sight, took off two inches of manifold pressure, and started a routine 500-fpm descent.

Passing 5,400 feet we heard a muffled pow/blam, had immediate white smoke in the cabin, and a spray pattern of oil on the windscreen. I put out an immediate mayday, and opened the window to clear the smoke. My son? Being of the Y generation, Taylor turned on his cellphone video and told our passenger to cinch down her seatbelt.

Birmingham cleared us to land on any runway and ATC started to tell me where the freeways were. I did not think we had engine power to nurse it the eight more miles to the field. I did play with throttle and mixture to see if there was any power setting that gave me any horsepower, but when I pulled the propeller out to increase glide, nothing happened. I slowed to 100 knots, trimmed, and everything settled to the nominal 1,000-feet-per-minute rate of descent and about 1,100 to 1,200 rpm. The prop was driving the engine and clanking and vibrating. I reached down and switched tanks.

There were no freeways in sight; I-59 was too far north and I-20 was too far south—and I could see neither. Nothing hard-surfaced was showing up anywhere, just lots of trees. My son kept pointing out the Birmingham-Shuttlesworth International Airport at 12:30 and kept scanning the instrument panel and the outside with his cell phone. I was committing to the only open field in my view at about 10 o’clock, with a north-to-south orientation and trees all around. It appeared to be about 2,000 feet long (turned out to be about eight acres with a fenceline down the middle).

At 1,800 feet (900 agl) we were approaching abeam the north end of the field on pretty much a high left base. I turned left, or south, to about 150-degree heading, extended the gear and full flaps, trimmed some nose up, and then S-turned and slipped to the right to attempt to get down in the northern half of the field. I really had to dump the nose down in the slip to aim where I wanted to touch down. As we lined up parallel to the fenceline, I could see a gray barn at the far south end of the field.

Where I wished to touch down ended up about 1,000 feet behind me. My estimated touchdown speed was 90 knots; we bounced twice, and the brakes were locked. Our skid marks showed up about 300 feet prior to the barn, which I was keeping to the right. As we hit the southern edge of the gravel drive leading up the barn, we went airborne again and into the treeline at 50 knots and 15 degrees nose up. I was aiming at light spots between the trees, which were mostly small oaks. We did not hit any head-on.

The right wingtip light was removed by a pole next to the barn, but the left wing hit a tree with enough force to turn us left 90 degrees before we came to a stop by a hefty tree, which caught the airframe at the right wing root where the door hinges are. The door flew off and landed about 30 feet away; my sunglasses and my son’s cellphone went another 100 feet down the same track.

My son unstrapped, helped our passenger out, and pulled my left leg free where it was jammed between the instrument panel and the left cabin wall. I was semi-pinned between the seat back and the left yoke, which he also pulled out of the way.

The NTSB ordered an engine teardown by Continental Motors, and I was allowed to be there. They found out the number two piston crankshaft bearing was oil-starved, failed, and caused the connecting rod to break at the crank journal end. It also broke at the piston pin end, and that caused the rod to break through the engine case.

I played the event over and over in subsequent days. I wish I had landed sooner; maybe we should have raised the landing gear after the first two bounces; how about a harder S-turn or a bigger slip, maybe lock up one brake and spin around—all sorts of ideas that did not come to mind during the emergency. I was just controlling the aircraft. The 10-percent downhill grade was not apparent even after landing. Raising the gear would have led to a lack of directional control and may have caused me to hit the barn. There was nominal paperwork: a simple statement to the FAA sufficed as a statement to the NTSB.

But then the questions came. The engine had 1,240 hours since rebuild in December 2004, nine years earlier, and was regularly flown about 140 hours per year. It had a perfect oil analysis, never anything in the cut filters, and regular oil and filter changes—usually at 40 instead of 50 hours. It had been flown normally for 18 hours since the last oil change. There had never been anything negative on annuals. It had been flown correctly, by the book, within all known limits.

Kent Ewing is a former naval aviator and instructor for the Beechcraft Pilot Proficiency Program. He now specializes in Baron Pilot Training.

1. If you do not have shoulder harnesses, do not fly your airplane. I won’t go with you.

2. Always have a place picked out to land, no matter the phase of flight. Always know the terrain below you, the surface wind, and the glide ratio. At 5,000 feet agl you have five minutes until you touch down with no power.

3. Execute your plan to meet up with the ground, and fly the airplane all the way into the crash!