What U.S. airline began operations by flying the mail between Key West, Florida, and Havana, Cuba, in 1927? 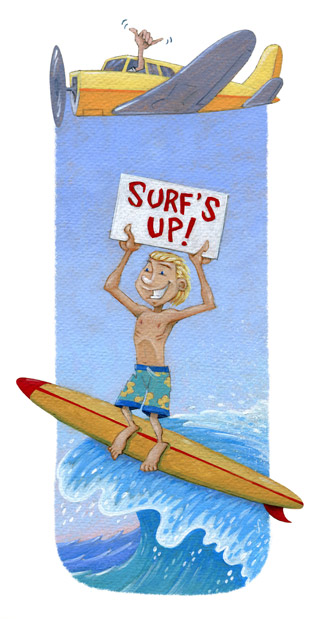 1. From reader Bob Tymczyszyn: A pilot arriving at Honolulu International Airport hears “surf in effect” on the ATIS. This means that

a. the outer, reef runway has been impacted by high surf. Pilots should be aware of possible puddles and hydroplaning.
b. pilots should exercise caution with respect to surfing activity in close proximity to the approach end of Runway 8R (the “reef” runway).
c. landings are being made on Runways 4R and 8L, and departures are being made on Runways 8L and 8R.
d. arrivals should be expedited, dude. The surf is awesome.

2. True or False? The Lockheed P–38 Lightning was one of the first twin-engine airplanes to have counterrotating propellers (as do Piper Senecas, for example). When viewed from behind, the left propeller of a P–38 turns clockwise, and the right engine turns counterclockwise.

3. What U.S. airline began operations by flying the mail between Key West, Florida, and Havana, Cuba, in 1927?

4. Which one of the following best explains why air flows faster above a conventional wing than below it?

a. Coriolis force
b. Bernoulli’s principle
c. one of Newton’s laws of motion
d. Venturi effect

5.  From reader Rose Dickeson: An American pilot flying an F4U Corsair over the Philippine Sea encountered a Japanese warplane emblazoned with a large green cross on a field of white. What was the significance of the cross?

6. A pilot awaiting takeoff clearance on Runway 30L in St. Louis on a fair-weather day notices that some of the low, scattered clouds cast shadows that track from the northeast. The shadows of other low clouds, however, are southbound. Which is the lower of the two cloud layers?

8. A pilot wants to fly as far north from his home airport as possible and then return without landing for fuel. Everything else being equal, the greatest “radius of action” with a given wind speed will be achieved when the wind direction is from

1. (c) The acronym, SURF, stands for “Safe Utilization Runway Flow” and indicates that preferential runway usage is in effect.

2. False. This would have been the preferred arrangement to minimize VMC (minimum controllable airspeed with an engine out), but the P–38’s propellers turn contrarily. The primary purpose of counterrotating the propellers in this manner was to improve the Lightning’s spin characteristics.

4. (d) Although Bernoulli’s principle explains why pressure above the wing is reduced, this occurs as a result of the increase in the speed of the air caused by Venturi effect.

5. The year was 1945, and the green cross indicated that the Japanese aircraft was surrendering.

6. Low-level winds in the Northern Hemisphere shift right (clockwise) with a gain in altitude. In this case, the wind at the lower altitude is from the north and shifts to a northeasterly wind as altitude increases. The southbound layer of clouds, therefore, is the lower of the two layers.

8. (d) The maximum radius of action (for a given fuel quantity and true airspeed) occurs when the average out-and-return groundspeed is at a maximum, and this occurs when flying under the influence of a direct crosswind (or, better yet, no wind at all).