Get the app Get the app
AOPA Members DO more LEARN more SAVE more - Get MORE out of being a pilot - CLICK HERE
News & Media AOPA Fly-in: Old-school charm

Relaxed, easygoing, friendly. These are not always the first descriptions associated with New England, but few towns reverse the prop on that stereotype as fast as Plymouth, Massachusetts. 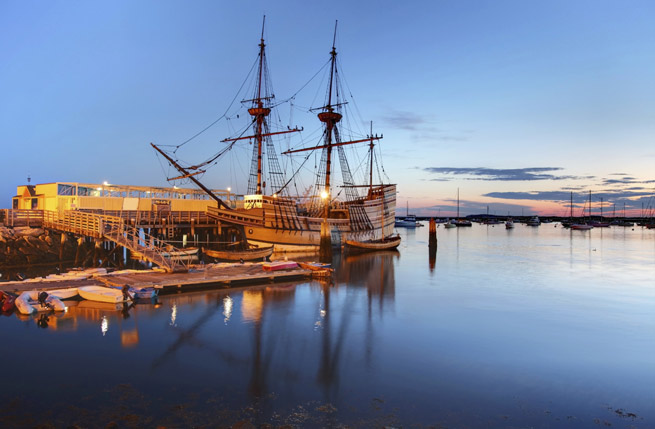 Relaxed, easygoing, friendly. These are not always the first descriptions associated with New England, but few towns reverse the prop on that stereotype as fast as Plymouth, Massachusetts. From individual pilots to business owners, local officials to airport staff, the town founded by Pilgrims, the birthplace of Thanksgiving—and much of the cranberry sauce that goes with it today—is thankful for the opportunity to welcome thousands of AOPA members on July 12 as the association converges on Plymouth Municipal Airport (PYM).

It is, after all, a town built for this sort of thing: hotels, bed and breakfasts, museums (including the nation’s premiere living history museum of seventeenth-century America), golf courses, stately mansions, and beaches abound. There is plenty of seafood, and sweets to go around. We will not—even if we arrive in the kind of numbers seen at the first AOPA Fly-In in San Marcos, Texas—clean them out in a weekend, although it might be fun to try.

Tom Hurley, president of the Plymouth Aero Club and a local resident since 1986, put it this way: “I still think I’m on vacation most of the time.”

AOPA’s next Fly-In is July 12 at Plymouth Municipal Airport (PYM) in Massachusetts.

Plenty of pilots in Plymouth 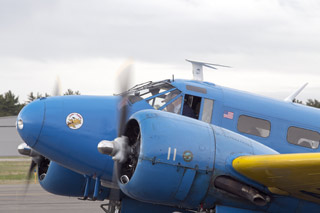 Bob Trinque might be the reigning champion of fly-outs. Would that records were kept on such things: Trinque, a retired Delta Air Lines captain, is now in his twenty-fourth year of flying regular breakfast runs, piling friends into his 1953 C–45 (a Beechcraft Model 18 variant made for the U.S. Air Force) painted in 1941-vintage U.S. Army Air Corps blue and gold. A “Chow Hound” logo (Disney’s Pluto on a flying hot dog) decorates the nose, a tribute to a World War II bomber—and as apt a moniker for an aircraft as there ever was.

Trinque fills the seats and departs Plymouth Municipal Airport (PYM) every Friday, Saturday, and Sunday in all but the worst weather, bound for airports within a roughly half-hour hop—and there are many to choose from. Announced by the rumble of twin Pratt & Whitney radials, the group arrives hungry. Over the years, those breakfast runs have whetted many a passenger’s appetite for pilot training as well.

“The flight schools really like it,” Trinque said, smiling. Two local flight schools are just steps away from Trinque’s hangar, prime real estate for those in the business.

Both Alpha One Flight, a flight school, maintenance shop, and aviation consultancy that has operated about as long as Trinque has flown breakfast runs, and Pilgrim Aviation, a relative newcomer to the flight training market, offer the range of certificates and ratings. For pilots looking to build or sharpen upset recovery and aero-batic skills, Bill Crawford has a hangar of his own, a school called Flightlab, and two aerobatic aircraft. Crawford teaches clients including private pilots and corporate flight departments advanced aerodynamics and the fine points of handling unusual attitudes in a real-world environment. He draws on lessons learned in the National Test Pilot School.

An undisputed modern master of unusual attitudes, Mike Goulian makes his aviation home at Plymouth. An aerobatic champion, airshow performer, and Red Bull Air Race pilot, Goulian will put his Extra through its paces during the AOPA Fly-In July 12, a demonstration of aircraft mastery that is part of an aerobatic tradition at Plymouth that dates back decades.

There are no fewer than five helicopter operators on the field, which offer introductory lessons and sightseeing excursions.

John Ryan can still remember the first time he saw a Bell 47 overhead, spraying the cranberry bogs. He decided on the spot that was the job he wanted.

That was 1987, and Plymouth Municipal Airport was home to a fleet of a dozen helicopters that supported cranberry growers who collectively produce much of the nation’s total supply (Massachusetts is second only to Wisconsin in cran-

berry production, with 2.1 million barrels—with 100 pounds of cranberries in each—produced in 2012, according to federal data).

From the spring cleanouts to summer fertilizing and fall harvest, helicopters, although supplanted to a degree by automation in recent decades, continue to play a major role in cranberry production, flying above delicate bogs that might otherwise be damaged by trucks or tractors, hoisting 600 pounds of cranberries at a time during the harvest, making 200 or more such runs in a day.

The mission is not for everyone. “It takes quite a bit of training to get somebody to where they’re not going to kill themselves,” Ryan said. He has been flying cranberries since 1989.

Ryan worked his way into the business from the bottom, and eventually earned a seat in the cockpit. In 1994, when Plymouth Helicopters went out of business, Ryan leased a Bell 47 and started his own operation, Ryan Rotors, with $14,000 he had managed to save up.

Video Extra: Tour Plymouth with us.