Get the app Get the app
AOPA will be closed July 4th, in observance of the Independence Day holiday. We will reopen at 8:30 am ET on Tuesday, July 5.
News & Media ‘Got some lift?’

Glider club soars after buying Indiana airport to save it, protect their future

John Morrical wasted no time asking the burning question of the day on a recent Sunday morning. “We got some lift?” he asked as soon as he walked in the door of the Central Indiana Soaring Society’s clubhouse at Alexandria Airport June 1.

After some good-natured ribbing, other club members who were relaxing and snacking on donuts and coffee confirmed that there was some lift out there, although it would take some hunting on this sunny morning with no cumulus clouds (visible signs of thermals).

Any day at the Alexandria, Ind., airport is a good day for the soaring club members, but it’s even better when there’s enough lift that the glider doesn’t beat the tow plane back to the runway and when Dave Waymire is the crew chief that day (that means donuts and hot coffee). Club members haven’t always had that kind of carefree time to lounge around and enjoy the airport.

Based at Indianapolis Executive (previously Terry) Airport for about 40 years, the club’s glider operations eventually became incompatible with other operations at the field. A new fixed-base operator on the field attracted jet traffic, and the club began looking for a new home in 2004. Duane Knotts, an avid pilot, had welcomed the group to his privately owned, public-use airport in Alexandria in the past, so they checked with him about renting hangar space, member Don Taylor explained.

“This is a little further away than we wanted, but he was so friendly and accommodating and welcoming,” Taylor said of the club’s decision to move its base to Alexandria, about a one-hour, 15-minute drive north of Indianapolis. The club, which formed in 1960, now has 65 members who live in Indianapolis or various suburbs around the city.

‘It was just a cornfield’

Knotts rented a hangar to the club for four years, but in 2007 made it clear to the members that he was getting older and wanted to sell the airport. The airport was part of the family farm. “It was just a cornfield,” said his sister-in-law Betty Kilgore, who also penned a history of Knotts’ flying career and airport with him before his Parkinson’s disease worsened and he went into a nursing home. Knotts had built the airport himself, plowing part of a cornfield next to the family house and grading a 2,300-foot runway, according to Kilgore’s account. He and his late wife Carolyn operated the airport, which eventually included a paved runway, two large hangars with bi-fold doors, a two-story office, and T-hangars. One of the main hangars features giant letters spelling Beechcraft across the side—out of character for a glider club but a remnant of Knotts’ days at the airport when he was a charter pilot, flight instructor, and Beechcraft dealer. 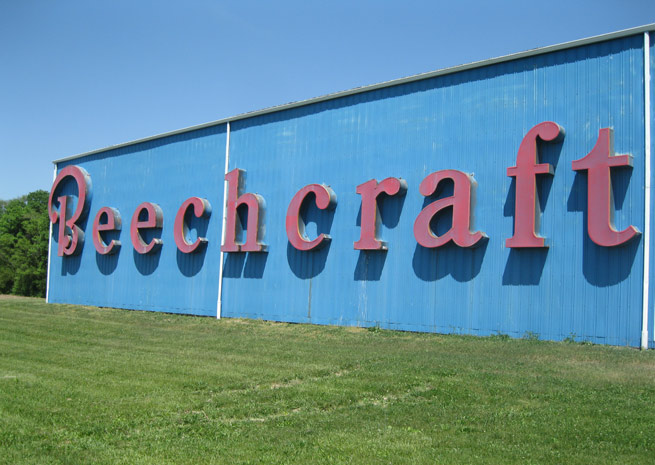 Nearby farmers were reportedly interested in purchasing the land, hoping to turn the property back into farmland. But Knotts wanted the airport to survive. He had introduced boys on his Little League baseball teams to aviation; hosted pancake breakfasts, cookouts, and airshows; and made a living at the airport with his wife.

“The airport was his family, like his baby,” Taylor said.

The glider club did many of the same aviation-related activities as Knotts and had an interest in buying the property.

“He said many times to us, ‘You are going to keep it as an airport,’” George Saunders recalled. Saunders was president of the club at the time they purchased the airport from Knotts and was involved in the negotiation. Before the club could buy the airport, they needed to have the land re-zoned from a farm to an airport. The group didn’t have the funds needed to purchase the airport, so they launched a “Field of Dreams” fundraising campaign amongst club members to raise about $60,000 to $70,000. That, added to about $100,000 from the club’s reserves and a $200,000 bank loan, enabled the nonprofit club to buy the airport and some additional land from another farmer for $375,000 in 2008.

Club members said they try to be good neighbors to the community, inviting residents to the airport for cookouts, and having events for youth. But, not everyone was happy that the club bought the airport: In one incident, someone poured nails on the runway, Taylor said.

However, Knotts’ family couldn’t be happier that the airport has carried on, according to Kilgore. “We are so thankful that you are using the airport,” she told Mike Nichols, a club member and the airport’s AOPA Airport Support Network volunteer, during a recent visit. “My husband and I come often and sit in the truck to watch the gliders.” 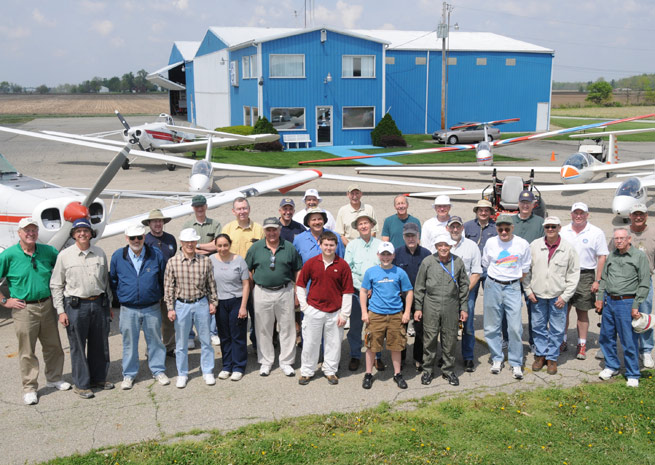 “We want people to be happy with us here,” Nichols responded. The club plans to be there for years to come and recently joined the city’s chamber of commerce.

The club recently refinanced and is scheduled to have the loan paid off in nine years. Because the nonprofit club purchased the airport, it can’t sell fuel to the public or rent hangar space to those outside the club. However, the airport is still public use and pilots are welcome to visit.

Saunders credits the club’s “good financial history” and forethought to plan for the future as reasons for being able to buy and maintain the airport and its facilities.

Ten to 12 gliders are usually based at the airport and pay rent to the club. Since the club has owned the airport, it has had to invest in preserving the runway. Now, $4 of every tow fee goes into the runway fund, Taylor said.

While ensuring the club’s financial security, members also have made sure the dues remain affordable. One way they do that is by requiring all of the club members to volunteer in some way—whether offering free flight instruction, taking turns flying the tow plane or being crew chief, or helping with aircraft and airport maintenance.

Full membership in the club costs $1,000, which is payable in one $500 installment to join and then two $250 installments over the following two years, and is good for the entire family (spouse and children under 21). Monthly dues are $48; annual Soaring Society of America dues are $64 (plus $36 for additional SSA family memberships). Student memberships for those under 22 are available for $200, monthly dues of $15, and SSA membership of $36. Flight instruction is offered by club members for free, and tow rates range from $16 to $50 based on how high the Piper Pawnee tows the glider (500 to 4,000 feet). 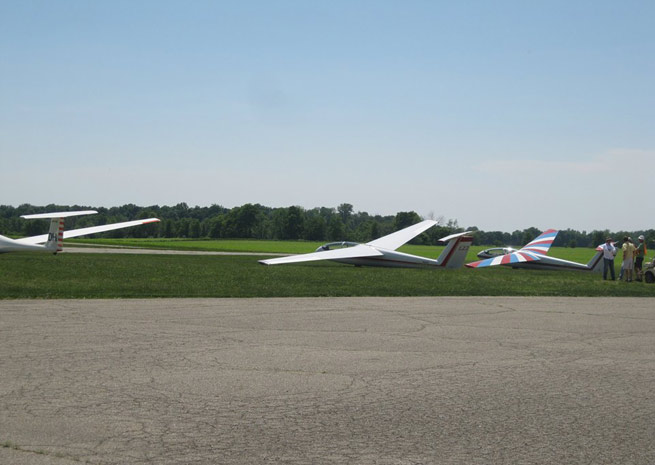 Joey Bowen, 16, is taking advantage of the lower rates to learn to fly. He wanted to fly airplanes when he was 14, so EAA Chapter 76 members at his home airport in Noblesville, Ind., suggested he join the glider club in Alexandria. Bowen completed an online ground school through the EAA Young Eagles program and now has 36 glider flights (he soloed after 28 flights). Bowen said he plans to switch to powered aircraft but is glad that he started with gliders—he said it is helping him to be a better pilot, and the sights aren’t too bad either with a “360-degree view” from the canopy. He also likes the club atmosphere.

“Everyone’s usually friends with everyone,” Bowen said. “It just feels good to be up here.

“Well, we all love each other,” Nichols said of his comrades, to which they responded with groans and more good-natured ribbing.

Club to introduce youth to aviation

The Central Indiana Soaring Society is gearing up for two weekend events to introduce youth to soaring this summer. Through a grant from the Wolf Aviation Fund, the club will offer ground, simulator, and flight instruction to 10 youth each weekend, June 18 and 19 and July 9 and 10. (Slots are already full.)

Teenagers ages 13 through 16 will learn about aviation careers, the Academy of Model Aeronautics, flight training, aircraft controls and instruments, and aviation records. Some of the club’s teenage members will share about how they got into aviation and what it’s like to fly gliders.

During sessions on a Condor desktop simulator, students will learn the basics of flying a glider. In addition, they will learn about airport safety and handling aircraft, how to be a wing runner and perform other crew duties, Soaring Society of America signals, and a preflight briefing before taking flight in a glider with an instructor.

In addition to the two camps, the club will team up with the Academy of Model Aeronautics on June 17 for a day at the airport. The academy will send 40 youth from its summer program to Alexandria for a tour of the airport and a full-scale glider launch. 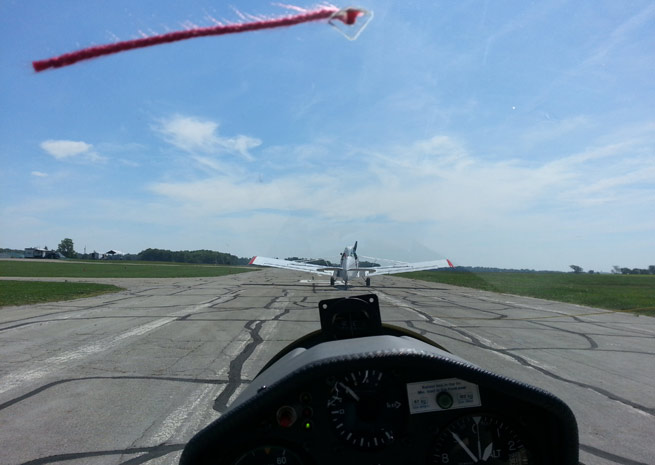