Get the app Get the app
Already a member? Please login below for an enhanced experience. Not a member? Join today
News & Media Flying club's foundation promotes GA

The 60-year-old East Hill Flying Club, based in Ithaca, N.Y., wanted to extend its mission, which included spreading the science of aeronautics. Thanks to a generous donation from a passionate midlife convert to aviation, along with a club member donating the proceeds from the sale of her aircraft, the club was able to create the East Hill Aviation Foundation.

“We have always been open to everyone but increasingly it seems that money is a filter determining who is able to learn to fly. As an instructor it breaks my heart to fly a discovery flight with an amazingly talented young person and know that most probably this career or avocation is out of reach due to their financial limitations,” said David St. George, the club’s manager and chief instructor. “For the last 15 years, I have pursued this with varying degrees of enthusiasm and success. The critical component is obviously money. We have some angels in Ithaca.”

The club was able to create the foundation thanks to the pro bono work of a generous local lawyer in the club, said St. George. “We had several more gifts we needed to accept with tax-free status, so were able to transfer them into our fund through another local foundation,” he said. The foundation was actually incorporated in 2009, but the club didn’t file the 1023 form with the IRS for tax-exempt status until late 2013, he said.

The foundation has a two-fold mission: helping qualified young people achieve their aviation goals with scholarships, and providing financial support to the East Hill Flying Club with larger projects that benefit the public. “For me, the real push also came from a group of very motivated, exuberant young people in my Aviation Explorer group. These kids are the future of aviation and hands-down the best thing I have done in my years in aviation,” he said.

Besides helping young people individually achieve their aviation goals, the club, through the foundation, hopes to provide a solid financial base for the future, said St. George. “We also want to build the local aviation community, of which East Hill is the center,” he said. “Ithaca is very transient with many Cornell and Ithaca College people learning to fly at our 141 school and cycling through. So we have relatively few long-term [club] members.”

St. George said he is only the third manager to run the flying club. “So myself, with a few long-term members, are the institutional memory and keeper of the culture. It is essential to fund local kids to build our base in Ithaca and assure the long-term viability of aviation right here,” he said. “An independent and solid financial base with some committed aviation people will hopefully assure the future success of East Hill and aviation in Ithaca.” 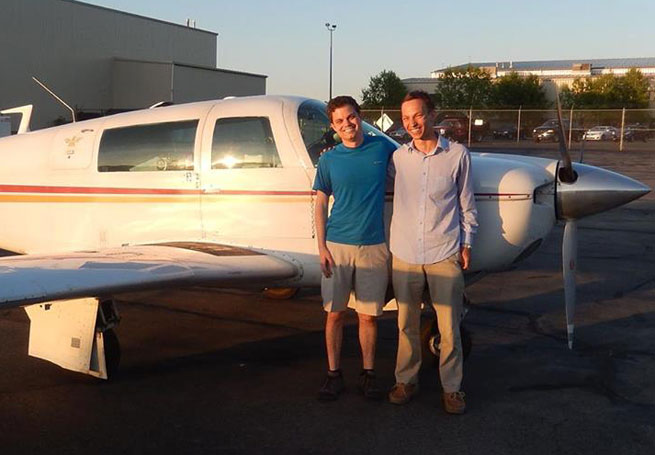