Get the app Get the app
AOPA Members DO more LEARN more SAVE more - Get MORE out of being a pilot - CLICK HERE
News & Media Training Tip: The lingering low 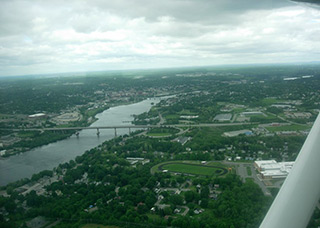 The low overcast, fog, and rain associated with yesterday’s frontal passage are gone as a new day dawns. But a lively surface wind still blows, and broken cloud layers fill the sky as high pressure slowly works its way back into the area.

The morning’s terminal aerodrome forecast calls for that gusty northwest wind to abate by afternoon. The current surface observation makes clear that a morning training flight to practice takeoffs and landings will be beneficial: 151453Z 34014G24KT 10SM BKN030 BKN047 21/11 A2988.

Those winds reported at the point of departure would seem to favor Runway 30, not Runway 04-22, at the two-runway destination airport 10 miles away. Even a short trip can mean big changes in surface winds, so it will be wise to verify that hunch. Since the outlying airport has no on-field weather reporting, and is often unattended, the pilots will have to ascertain surface winds the old-fashioned way—by overflying the airport above traffic pattern altitude and checking the wind indicator.

Strong winds don’t always imply turbulence. However, an informed pilot glancing at the sky on this post-frontal morning will expect it to be present.

The tipoff? The flattened appearance of the bases of the broken clouds at 3,000 feet: “They're caused by the shearing forces of strong, low-level winds,” wrote Thomas A. Horne in “Wx Watch: Eyes Wide Open.”

“Below the bases, you'll be in the bumps, but if you can safely climb to on-top conditions a smooth ride awaits,” he wrote.

Climbing above the deck wouldn’t be practical on today’s short hop. So add experiencing a short cruise leg under conditions of moderate turbulence to the day’s practice agenda.

And it turns out on arrival at the outlying airport—which is slightly closer to the lazily departing low—that the surface wind blows with a more northerly component, promising a lively, variable crosswind regardless of the runway that is chosen for landing. (As the pilots will learn later, the low’s reticence to depart the area has generated an amended TAF, extending the duration of 15-knot winds gusting to 25 knots through midnight Zulu.)

How do you like your crosswind—left or right? Conditions like this, and the availability of a multiple-runway airport, create an opportunity to practice both.

Include a go-around or two for practice and to maintain a strong safety margin if your approach becomes unstable down there in the bumps!