'The human must be the boss' 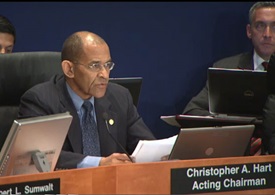 Missed indications and misunderstanding of the systems at their command led the crew of a Boeing 777 to miss its final opportunity to correct a visual approach gone wrong. That, in general terms, was the conclusion reached June 24 by the National Transportation Safety Board, whose members did not appear to fully agree on the lengths that should be taken to prevent a similar disaster. Among the board's recommendations was a certification review of the Boeing's automation systems.

Board members did generally agree on the basic answer to a mystery that has endured since July 6, 2013, when Asiana flight 214, one of the most sophisticated aircraft in the world carrying 307 people including a flight crew with 21,700 hours between them slammed into a seawall just short of Runway 28L, shearing off the tail and sending the rest of the airplane skidding down the runway. Three passengers died, 49 passengers and crew members were seriously hurt, including a first officer stationed in the jump seat who called out "sink rate" in the final moments.

The NTSB found that the aircraft and systems behaved as designed; the flight crew was not impaired by alcohol or drugs, and was properly qualified. Fatigue from a long flight played a role in missed opportunities to note and act on airspeed decay, the agency concluded, and training may have left the crew with an incomplete understanding of the consequences of each action taken, particularly with the aircraft’s automation systems.

“In this instance, they over-relied on automated systems they did not fully understand and flew the aircraft too low and slow,” said NTSB Acting Chairman Christopher A. Hart. “Automation has made aviation safer. But even in highly automated aircraft, the human must be the boss.” 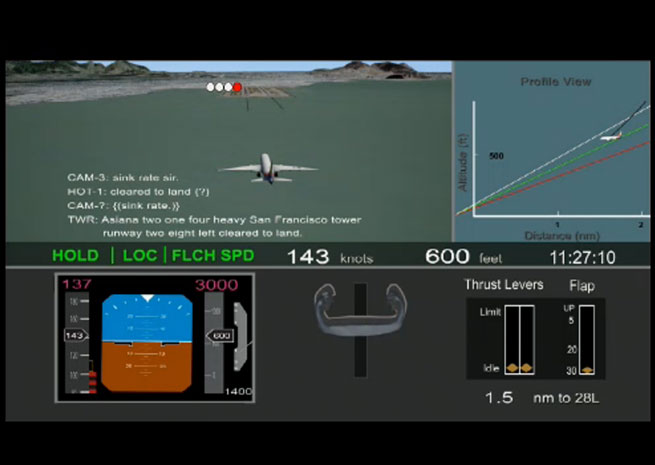 The investigation prompted 27 recommendations to the airline, aircraft manufacturer, and government agencies including the FAA and city firefighters, many of which have already been acted upon, the board noted.

The trouble started, investigators said, when the airliner was 14 nautical miles from the runway and slightly above the desired glidepath. (The glideslope of the ILS was not operational that day, though investigators determined this should not have been a problem with the runway clearly visible.) Cleared for the visual approach (straight-in), the crew was told to maintain 180 knots until five miles out, but “mismanaged” that descent, the board concluded, arriving at the five-mile point “well above” the desired 3-degree glidepath.

A series of corrective actions made matters worse. The pilot at the controls, an experienced Airbus captain being trained to transition to the 777 by a nonflying pilot with 12,000 hours, disengaged the autopilot to take manual control of the primary flight controls, but left the throttles in an automated mode—or so he believed. Expecting the autothrottle system would prevent dangerous airspeed decay, both pilots focused their attention elsewhere, and missed the rapid drop in airspeed as the engines idled for crucial moments reconstructed in an NTSB animation. A first officer watching from the jump seat called out “sink rate, sir” more than once, but neither pilot in position to act accurately diagnosed the problem until it was too late. A go-around was attempted with 100 feet of altitude left, too late for the aircraft to respond.

Board member Robert Sumwalt, who noted his own 24 years of experience as an airline pilot, said he did not personally believe that the crew was incompetent.

“What I think this is a case of, is that the pilot flying the airplane expected that the airplane would do something for him that it wasn’t designed to do,” Sumwalt said, adding that his training “may have misled him,” and that the related documentation provided to 777 pilots “was not totally clear.”

Fatigue was a contributing factor, the board ruled, though it was a combination of failure to notice decaying airspeed at low altitude, reliance on the automation, and the increased workload created by trying to compensate for an approach begun too high that combined to create a disaster, the board concluded. Placed in the “hold” mode, the power control system did not automatically “wake up” and increase thrust when airspeed decayed to a dangerous point—nor was it designed to do that with at least one of the flight director systems still on.

“Nowhere in the documentation is it clear,” Sumwalt said. “If you piece it all together, you could understand this, but it wasn’t clearly presented to this pilot.”

Investigators told the board that the pilot said after the incident that he was “astonished” that the system had allowed airspeed to decay so much.

The board noted that the crew did not follow standard procedures to the letter when it came to callouts, and the crew may have missed an opportunity when the flying pilot did not announce placing the power control in “hold” mode.

The crew initiated the go-around 11 seconds before impact. Investigators noted that action just nine seconds sooner could have been enough to prevent the crash.