Get the app Get the app
AOPA will be closed July 4th, in observance of the Independence Day holiday. We will reopen at 8:30 am ET on Tuesday, July 5.
News & Media Flight Challenge: 'Still anybody's game'

It’s getting down to the wire for pilots and would-be aviators to pit their skills against the competition in the Flying Challenge Cup, Redbird Flight Simulations’ interactive aviation experience that could win a skillful "stick" a free ticket to EAA AirVenture and a spot in the competition’s final round next month.

Registration is still open to fly any or all of three interactive challenges—precision landings, steep turns, or Lazy Eights—in learning and practice modes, and then (if you choose) to compete to earn a spot in the final fly-off at AirVenture n Oshkosh, Wis., where ultimate champions will be crowned. Competition to make the finals will end July 6.

As of early June, an estimated 255 participants had logged more than 4,500 flights at local simulator centers, up from 3,500 in mid-May. Simulator centers may charge for the use of their simulators. The challenge provides registrants with a coupon to get their first 30 minutes of "sim time" for $15.

According to Redbird, participants have flown Challenge flights in 32 states, Canada, and Australia, and some flight schools have incorporated the challenges directly into their real-world pilot training programs. Others have hosted local challenges, with prizes.

Pilots are not the only participants: Of the 255 who have flown, registration data showed that the group included approximately 136 pilots, 70 student pilots, and 49 nonpilots. More than 1,400 additional registrants have signed up but not yet flown. They are receiving updates and training tips along with the active participants.

Competition has been close, said Redbird spokesman Jeff Van West, noting that "the spreads are only a couple of percentage points between rated pilots and students. Top non-pilots are usually only two to five percent behind in all areas except Lazy Eights, where scores run about 10 percent lower."

Among the top 10 competitors in any given category, the range of scores varied by a mere five percent.

The finals, consisting of a flight challenge to be released after finalists are chosen, will take place on the main stage in AirVenture's Phillips 66 Square on July 30, hosted by aerobatic pilot Mike Goulian, "with live-streamed video streamed  on the Jumbotron," and perhaps online as well, Van West said. 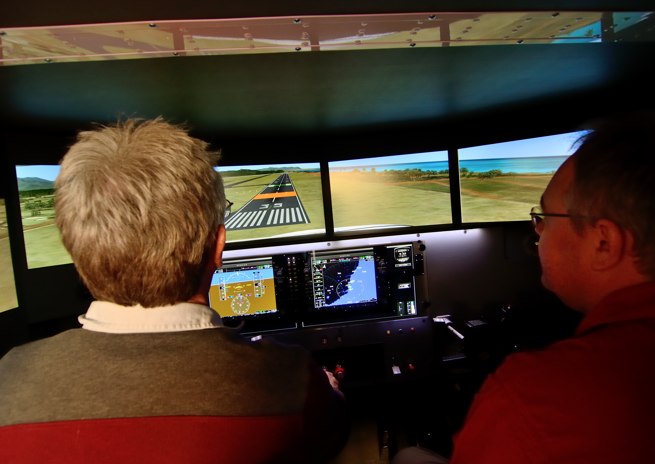