Get the app Get the app
Already a member? Please login below for an enhanced experience. Not a member? Join today
News & Media Blackhawk boost 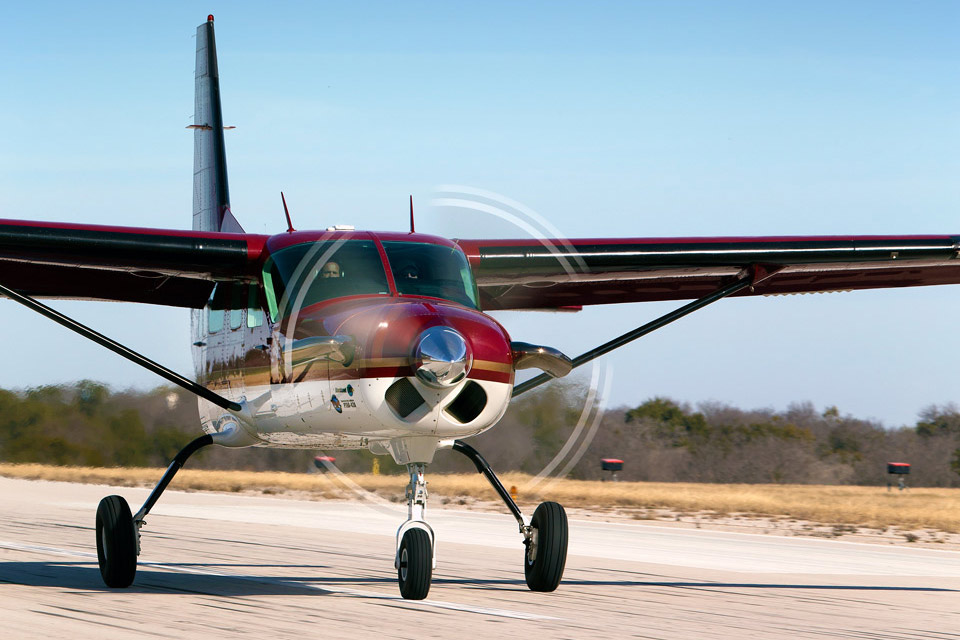 It seems that no matter how optimized an airplane design may be, there’s always room for improvement. To some operators, even that beast of an airborne pickup truck—the Cessna Caravan—falls short in some categories. That’s where Blackhawk Modifications, Inc. enters the picture. Blackhawk is in the business of swapping the Caravan’s stock Pratt & Whitney PT6A engines with more powerful variants. In this supplemental type certificated modification, dubbed the XP42A, engine power gets a big bump up from the standard-issue PT6A-114A’s 675 shaft horsepower thanks to its replacement with an 850-shaft-horsepower PT6A-42A.

Shorter takeoff distance, double the climb rate That extra 175 horsepower does wonders. This Blackhawk STC—available for both the model 208A and 208B Caravans—is the simplest way to boost the airplane’s runway performance, rate of climb, and cruise speed. For example, a stock 208B Grand Caravan at max takeoff weight (8,750 pounds) with no belly pod and a 20-degree flap setting will take 2,420 feet to take off and clear a 50-foot obstacle; the Blackhawk upgrade’s engine lowers that to 1,835 feet.  And that’s at standard sea level conditions. At a 4,000-foot elevation and ISA +20-degree conditions, it’s 3,380 feet for a stock, podless 208B but 2,420 feet for a 208B with Blackhawk’s 850-shaft-horsepower engine. Across the board, Blackhawk advertises a 30-percent reduction in takeoff distances to clear the hypothetical 50-foot obstacle.

Although it sounds counterintuitive, Blackhawk says that converted Caravans with cargo pods experience negligible performance penalties in either takeoff or climb.

The company says climb-rate increases are similarly impressive. A Blackhawk Grand Caravan will climb out of 4,000 feet at 960 fpm under ISA +20-degree conditions; the stock airplane will climb at 675 fpm.

And even though the Caravan isn’t exactly sought after for its cruise speeds, the Blackhawk STC also helps in this department. Expect 184- to 189-knot true airspeeds for the -42A-powered Caravans, compared to the 162- to 173-knot numbers for a standard 208A or 208B. Of course, if you push the -42A engine’s power up to its 770-degree interturbine temperature (ITT) limit, a Blackhawk Caravan could let you cruise near 190 knots—but fuel flows could be as high as 440 pph (about 65 gph).

Soon we’re in a VY climb, going up at 3,600 fpm. Within five minutes we’re at 12,000 feet. To get an idea of maximum cruise, power was set to the maximum torque value of 2,232 feet per pound (we weren’t torque-limited on the day of our flight), ITT ended up being 756 degrees Celcius, and the result was a 200-knot true airspeed on a fuel burn of 485 pph/72 gph. That may not be the most practical power setting, but it demonstrates the kinds of speeds that are achievable without exceeding ITT limits. At normal cruise, the airplane turned in 187 knots at a 702-degree ITT burning 62 gph.

All the talk about fast skydiving turn times made me curious. We got to 12,000 feet in short order. How fast could we come down? So it was power to idle, pitch over to airspeed redline, and start the stopwatch. The ground filled the windshield and down, down, down we went—to the tune of 5,000 fpm, I think. The vertical velocity indicator was pegged, so who knew the actual rate of our plunge? In an ear-popping two minutes we were on short final and at our VREF of 90 knots. So with a five-minute climb, a few seconds for dropping off any parachutists, a two-minute descent, and another 10 minutes or so to take on another load and launch once more, our turn time would be something like 15 minutes—even less if we’d climbed to only 10,000 feet.

After starting out as a corporate pilot, Allmon sold jets with two companies he formed—Texas Jet and Allmon Aviation. He learned the STC business while serving as aircraft sales manager at RAM Aircraft, also located at Waco Regional. He formed Blackhawk in 1999 and began by reengining Cessna Conquest Is with more powerful Pratt & Whitney turboprop engines. Similar programs for the E90, C90, 200, and B200 King Airs followed, then came conversions for the Piper Cheyennes I, II, and IIXL. The Caravan is his latest upgrade. “No one else was doing it in as great a way 15 years ago,” Allmon said. “It was like RAM on steroids. We’d put new Pratts on airplanes instead of doing overhauls.”

It’s been a good business. Blackhawk is set to celebrate its 300th conversion on a total of more than 500 aircraft, and the purchase of its 1,000th Pratt & Whitney engine. “Jets are having a rough go,” he said. “People are tight with their money, and the image of someone with a jet can seem wasteful. Turboprops are more economical, and with commercial operators, cost is everything. So the best airplane you can have may just be the one you already own—only with an engine conversion for greater economy.”

Things weren’t always as rosy. Back in 1999, Allmon had trouble buying Pratt & Whitney engines at a discount. “It took a year before I could even get a meeting with Pratt. They turned me down at first, then sold me 24 engines at a discount,” he said. “But the deal was that I had to turn them into conversions within five years—or pay full price for them.”

Allmon turned all those engines into Conquest conversions within two years. Suddenly, he didn’t have any more trouble meeting with Pratt & Whitney. “I think I got their attention,” he boasts. Today, Blackhawk is the biggest non-OEM (original equipment manufacturer) buyer of Pratt & Whitney engines in the world.

New hardware Blackhawk’s Caravan STC includes more than an engine swap. Also included is a four-blade, 100-inch-diameter Hartzell propeller, which replaces the three-blade, 104-inch-diameter original; it gives better ground clearance, and produces less noise. An aircraft payload extender (APE) kit is also part of the deal. This consists of a larger main gear tire and axle assembly, stall fences, and vortex-generator-looking aerodynamic devices at the flap trailing edges. The APE gives 208A owners a maximum takeoff weight of 8,362 pounds—up from the standard airplane’s 8,000 pounds. For Grand Caravans, there’s a 312-pound increase, from 8,750 to 9,062 pounds.

Also included in the upgrade package is a larger oil cooler and air intake, a new engine mount, a new cowling made of carbon fiber, new hoses, and new engine gauges. Dual exhaust stacks replace the single large stack on standard airplanes; an oil quantity sight gauge replaces the stock dipstick; and compressor washes are made easier by the installation of an external port that connects to the wash ring.

Powering up—and down “We have a lot of Caravan customers who have a need to fly big loads out of short and obstructed runways with high density altitudes,” says Jim Allmon, Blackhawk’s president and CEO. “This STC takes care of that problem.” The Caravan STC was first offered in 2008, and to date more than 30 conversions have been completed—most of them at the 50 Blackhawk distributorships around the world. The customers are an exotic lot, including charter operators working out of jungle strips in New Guinea and wildlife biologists in Africa. But with 16 conversions, skydiving firms top the list. Seems that with the Blackhawk Caravan, 3.8 to four parachutist loads can be dropped in an hour; standard Caravans can only do 2.5 loads per hour, Blackhawk says. Blackhawk says this can translate to $20,000 or more per month of extra skydiving income over the standard airplane.

To get an idea of the Blackhawk Caravan’s performance I flew with Chris Dunkin, Blackhawk’s flight operations manager and central U.S. sales manager. We flew a podless 2002 model 208A that was about to be picked up by its owner—a photogrammetry firm in Australia. Its conversion had just been completed at Blackhawk’s home base on the Waco, Texas, regional airport.

Starts are standard Pratt—waiting for NG to reach 15 percent, then introducing fuel with the condition lever—but there are some differences on the panel. The new propeller rpm gauges show that prop redline is 2,000 rpm, up from the stock Caravan’s 1,900 rpm. ITT limits are set at 770 degrees Celsius, down from the typical -42A’s 800 degrees, as used in the King Air B200. (The -42A engine is also used in the Piper Meridian, but in that application it’s derated to 500 shaft horsepower.)

At our takeoff weight of approximately 7,550 pounds, an elevation of 516 feet, a temperature of 48 degrees Fahrenheit, and flaps set to 20 degrees, the airplane fairly leapt off the ground at the 65-knot rotation speed, and well within 1,000 feet. “We tell pilots to ballpark it for a 1,000-foot takeoff distance,” Dunkin says. “Also, on a 100-degree-Fahrenheit day the -114A engines will be ITT-limited for takeoff—depriving you of full power—but not so with the -42As. That’s important for hot-and-high performance.” (Dunkin emphasized that on cooler days the -42A could maintain its 850 shaft horsepower all the way to 10,000 feet, and at ISA +20 degrees C. it could hold full power to 7,000 feet.) 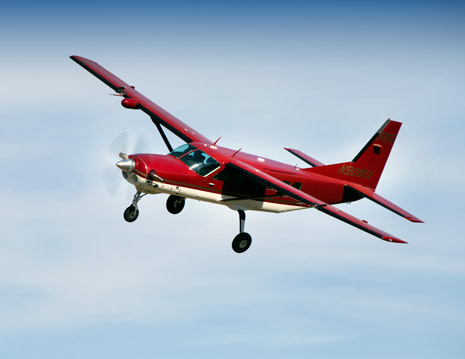 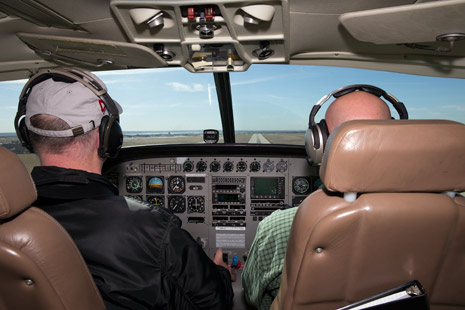 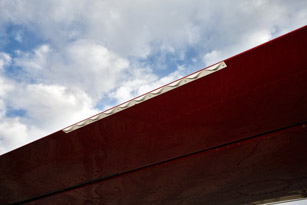 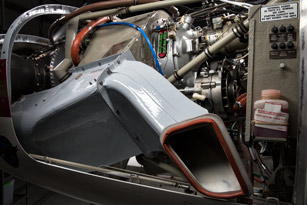 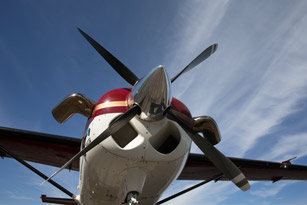 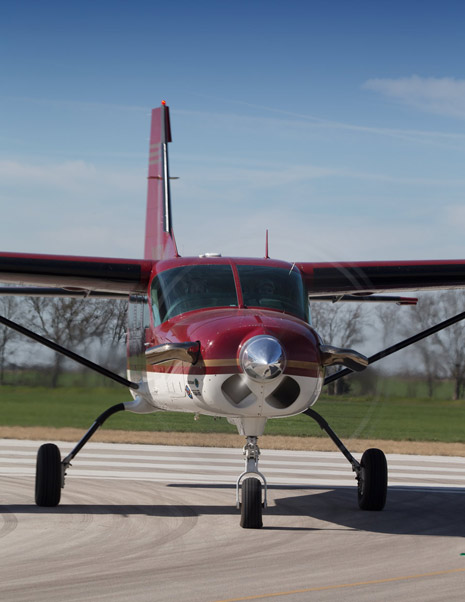 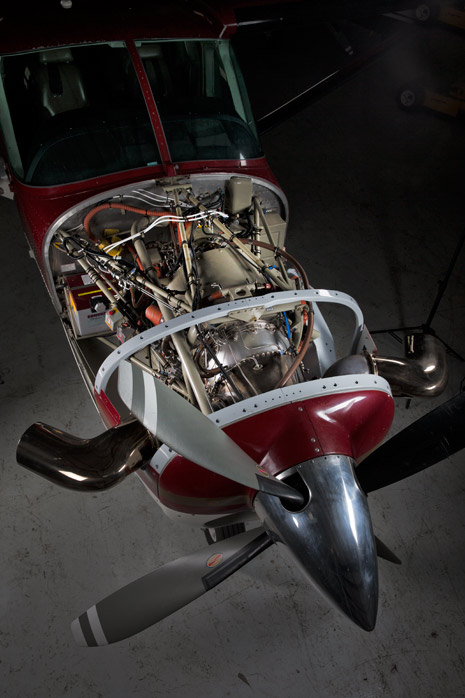