Editor's note: An earlier version of this article incorrectly identified the receiver required to run the synthetic vision. It may be run with a GDL-39 or GDL-39 3D receiver. We regret the error.

Garmin didn’t invent GPS-derived “synthetic vision,” but adding it to the G1000 avionics suite legitimized and popularized the technology.

Similarly, Garmin wasn’t the first to offer a syn-vis on a tablet computer app, but adding it to Garmin Pilot puts the technology in front of thousands of additional pilots and raises the utility and sophistication of electronic flight bags to a new level.

First, a confession. When I first saw syn-vis on a G1000 in 2008, I regarded it as a gimmick. To me, traditional instrument six packs were perfectly adequate for instrument flight, and colorful graphics of the outside world seemed interesting but unnecessary.

That changed for me on a foggy winter day when I flew a G1000-equipped aircraft on an LDA approach into Hartford-Brainard Airport in Connecticut with rain pelting the windshield. An unfamiliar approach to minimums would normally be a somewhat challenging event, but syn-vis made it simple by constantly providing situational awareness at a glance. I became an instant convert, so I was happy to update my Garmin Pilot app in late February as soon as syn-vis became available. 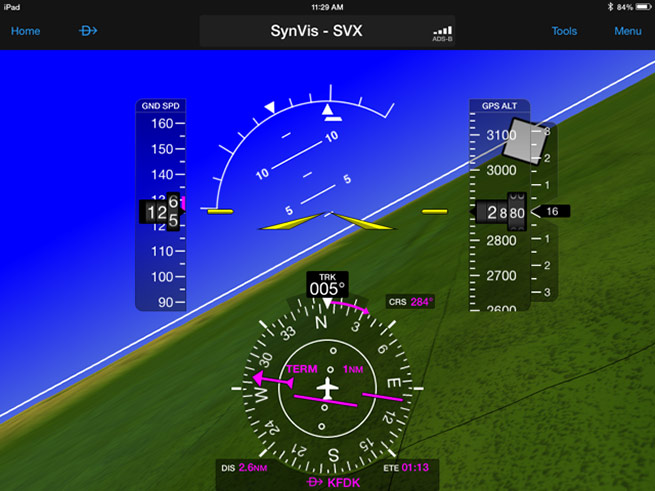 Running it requires a GDL-39 receiver and an IFR or VFR Premium subscription to Garmin Pilot ($75 a year plus $50 for VFR Premium or $75 for IFR). Also, customers who get the GDL-39 3D can get synthetic vision with a regular Garmin Pilot subscription ($75 a year.) The GDL-39 3D ($899 including battery) has an attitude and heading reference system (AHRS) built into it that senses pitch and roll and communicates via Bluetooth to a tablet computer (in my case, an iPad).

I secured the GDL in the back of my RV-4, attached the iPad to the sub-panel where it’s shaded from the bubble canopy, and was immediately impressed by what I saw. The high-resolution display is crisp, clear, and colorful and looks like a high-fidelity version of a G1000 primary flight display.

My aircraft is equipped with a Automatic Dependent Surveillance-Broadcast (ADS-B) Out (through a Trig transponder), so the GDL 39 receives both ADS-B traffic and weather. (Without ADS-B Out, it would only get only partial traffic and full-time weather.) 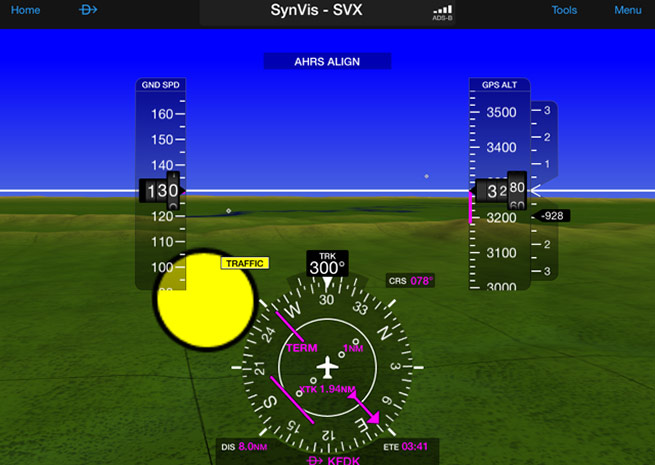 Once airborne, a few of the syn-vis limitations became apparent. First, in a 10-degree climb, the unit wrongly thought it was level. In level flight, it erroneously believed it was in a 10-degree descent. The reason for this is that the GDL is programmed to believe it is level on the ground—and that works fine in most nosewheel airplanes, but not with tailwheel airplanes like an RV-4. A quick tap of the “reset” button in level flight quickly recalibrated the unit and it remained accurate the rest of the flight.

The syn-vis display is exceptionally good at showing traffic. Other aircraft appear as tiny white diamonds, then grow into white dots, and finally large yellow spheres as they get closer.

Airports appear as billboards with their four-letter identifiers spelled out. As you fly closer, the runways show up in their proper orientation, and runway numbers appear on the thresholds as they do in real life.

Transparent tapes show GPS-derived altitude, ground speed, and ground track in the traditional glass-cockpit locations along with an HSI and magenta trend indicators. Unlike the G1000, however, the syn-vis for tablets doesn’t include a flight path marker (green dot) or highway-in-the-sky boxes to fly through. 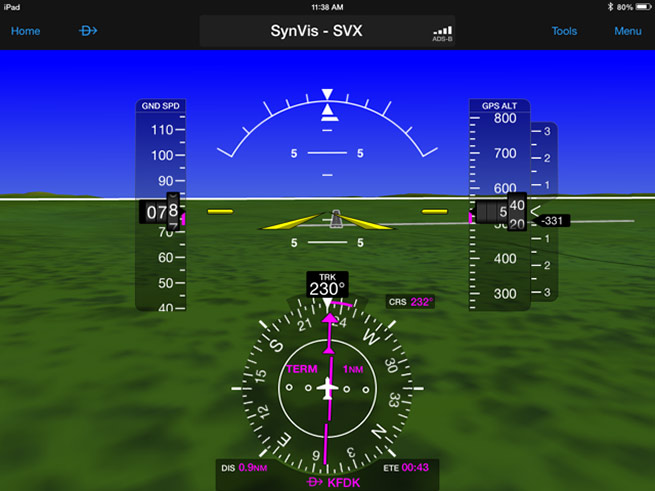 This version of syn-vis also must be viewed full screen. There’s no split-screen to allow a moving map or traffic on one screen and syn-vis on the other.

In sum, Garmin’s syn-vis for tablet computers makes a helpful technology much more widely available at a tiny fraction of the cost of FAA certified, panel-mount systems. And while these portable units aren’t nearly as robust as the certified, panel-mount varieties, pilots who become accustomed to flying with syn-vis and the situational awareness and comfort it brings won’t want to do without it.

And what looks like a gimmick at first will quickly be regarded as essential to a larger portion of pilots. 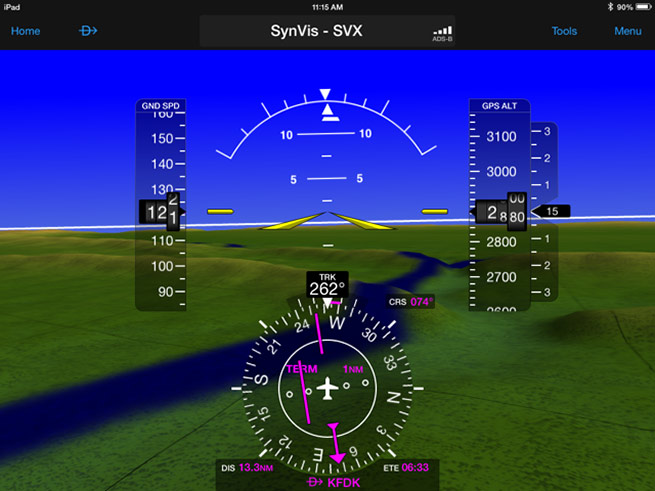