Get the app Get the app
Already a member? Please login below for an enhanced experience. Not a member? Join today
News & Media Pilots: Steve Stafford

Pilots who saw the 1998 motion picture, Six Days, Seven Nights, might have wondered how a de Havilland Beaver could be ditched near the rugged shoreline of Kauai. 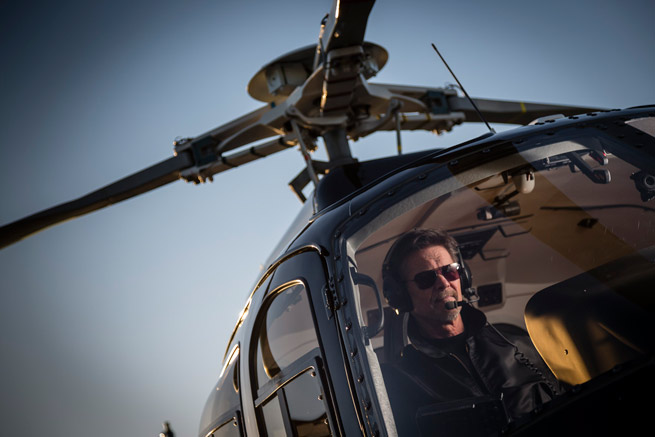 Pilots who saw the 1998 motion picture, Six Days, Seven Nights, might have wondered how a de Havilland Beaver could be ditched near the rugged shoreline of Kauai with only dummies (representing actors Harrison Ford and Anne Heche) in the airplane. No, it wasn’t done with computer-generated imagery or radio control.

The creative genius behind that action sequence was the movie’s aerial director, Steve Stafford. The Beaver was suspended at the end of a 200-foot cable attached to a Huey helicopter that repeatedly crashed the Beaver into the water until the film’s director was satisfied with the results. The cable was removed in post-production and cannot be seen in the film.

“This is typical,” Stafford says. “When people see a ‘stunt’ in a movie or on television, they usually have no idea how much work and planning go into making that happen. The trick is to make it look dangerous while doing it safely.”

Aerial stunts may not be performed for the camera without prior approval from studio safety directors, insurance companies, and the FAA. “The FAA was skeptical about crashing the Beaver into the water while slung beneath a helicopter with its engine running,” Stafford says. “It had never been done before, so we had to demonstrate that it could be done without endangering anyone. The FAA approved our plan but required that a magneto cutoff switch for the Beaver be available to the helicopter pilot so that if the aircraft broke loose, it couldn’t fly off on its own.”

Stafford, a former television director, founded his company, Studio Wings, in 1998. Based in Camarillo, California, it specializes in performing aviation action scenes for the entertainment industry. “This is a highly specialized business,” he says. “Only a handful of us are certified by the FAA to do this kind of work.”

One of his greatest challenges was making what appeared to be an out-of-control helicopter landing on the set of a New York City street for the NBC-TV series, Chuck. He had only a few feet to spare on each side of the rotor disc. And it was at night.

“I’m incredibly lucky,” Stafford says. “I get to fly under bridges and chase bad guys along mountain roads without worrying about losing my license.”

Flying: Learned to fly in a Cessna 152 while on the GI Bill in 1971.
Hours: Has logged 8,700 hours, of which half is in helicopters.
Work: Has been in the entertainment business for 40 years.
Extra: Awarded a 2008 Emmy for Best Stunt Sequence (for the TV series, Fastlane).