Get the app Get the app
News & Media Avionics: Paper-less

Where have all the charts gone?

Read that carefully. They aren’t dead, nor will they be for some time—if ever. 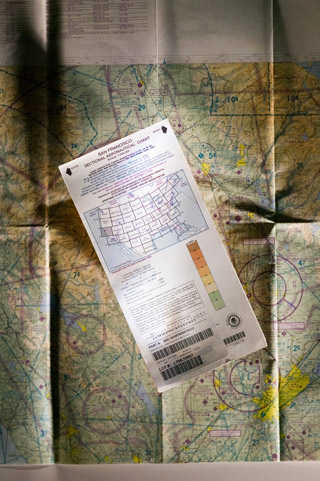 Read that carefully. They aren’t dead, nor will they be for some time—if ever. But they are in danger of becoming extinct, which should come as no surprise.

Apple’s iPad has provided more excitement for the recreational and light-business-use side of general aviation than anything since in-cockpit weather, and adoption of the tablet has been considerably faster. Some unverified reports speculate something on the order of half of all general aviation pilots use an iPad or some tablet variation.

Naturally, there are consequences to this rapid technological shift. Chief among them is a decrease in paper chart sales. A few years ago the FAA decided to stop selling paper charts directly to pilots, instead working through a two-tier dealer network. Sporty’s Pilot Shop is the largest. John Zimmerman is a vice president for the company and he says paper chart sales are down by roughly half of what they were only five years ago. “That’s a profound shift,” he says. Howie Keefe’s popular Air Chart Systems stopped production last year after more than 50 years in business. The company cited electronic charting, among other reasons.

One of biggest losers in the charting game is the FAA’s AeroNav Products division. Depending on who’s telling the story, either the FAA has been losing money because of a reduction in paper chart sales, or the agency is simply looking to beef up its budget. Regardless of the original intent, a seemingly innocuous email from Abigail Smith, then director of business development for the division, invited stakeholders to a meeting to discuss electronic charts and possible future pricing.

Smith’s email caused a minor firestorm among developers and the industry, including AOPA. A special committee was convened, and eventually submitted recommendations that reflected the user perspective. Many would say that the huge explosion of the iPad and its related aviation applications have been caused, in part, by the free and easy access to FAA charting data. Although the FAA charges users for printed aeronautical charts, the agency doesn’t charge software companies (or anyone else) for that same data delivered electronically.

Smith, now the director of AeroNav Products, has told AOPA and others that a policy requiring some charge for digital products will be implemented, but there’s been no movement on it for about a year.

Developers don’t like the idea of a fee for digital data because they say it will stifle innovation by driving smaller companies out of the market and reducing the subscriber base. There’s no doubt any charge from the FAA would be handed straight down to the users, increasing the cost of charting applications by at least a few dollars a year.

In a sense, the FAA is facing exactly what every printed publication in the world is
facing. How does one draw revenue from decreased print sales? Forget about adding
services, at least a few of which the developers are requesting. With fewer sales come new proposals to make up the money elsewhere. But paper isn’t going away just yet. “GA pilots we talk to really like sectionals and L-charts,” Zimmerman says.AOPA