Get the app Get the app
Already a member? Please login below for an enhanced experience. Not a member? Join today
News & Media Never Again: ‘Wall Street’ Journey

A muttering engine on a calm night

Late October in Mississippi can be nice. 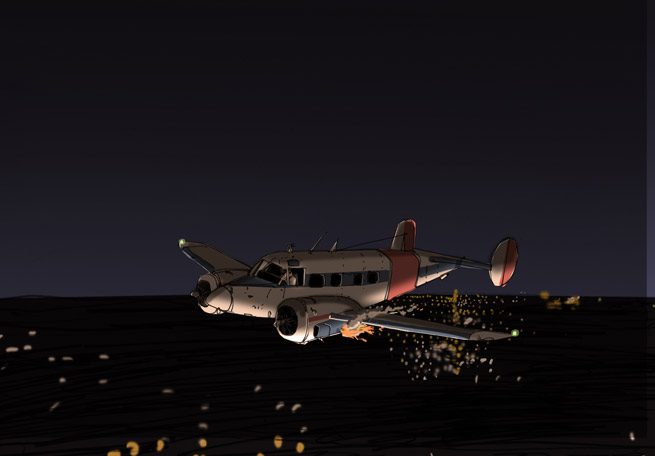 Late October in Mississippi can be nice. The cold air has not made it this far south yet, so we usually get cool nights, warm days, and lots of sunshine.

I am lying in the shade under the wing of a Beechcraft Model 18. The airport is Meridian’s Key Field, a joint civilian/military airfield. It’s about an hour before lunchtime, and the air has already started to heat up. I’m watching the mechanics replace a jug on one of the Pratt & Whitney R-985 radial engines.

The day before, I had gotten a call from operations at the flying service I worked for and was told to be ready for a flight to LaGrange, Georgia, to haul Wall Street Journal newspapers from there to Jackson. I would leave Hawkins Field, go to LaGrange, load the Beech 18 with newspapers, and fly them back to Jackson for Friday-morning delivery. The airplane I would be flying was a 1965 Model H18. The two R-985 engines produce 450 horsepower each. The conventional (tailwheel) landing gear was common for that time period.

Preflight requires getting out onto the wings to check fuel and oil. The airplane holds 318 gallons of fuel, and for each engine seven gallons of oil—that’s right, gallons, not quarts (see “Time Traveler,” page 50). The oil is in tanks external of the engines. After finishing the preflight, I picked up my paperwork and prepared to start the beast about two hours before dusk.

Prestart flow is performed, engine primed, start switch engaged, prop swings through two revolutions, magneto switch on Both, primer switch as needed, ignition booster switch held on until start. If you have done everything correctly and in the right sequence, the engine will begin to belch large volumes of smoke. Once it settles down and all cylinders are firing, it makes the most beautiful sound an aviator will ever hear. Now we can perform the three-handed trick for the other engine.

Departing Hawkins Field, I climbed to 5,000 feet for the leg to LaGrange. I had the sun at my back, power set for cruise,
airplane trimmed, life is good—what was that? The left engine started muttering, but there was no apparent power loss. Three or four seconds of that and it went back to the smooth rumbling sound a good radial should make. Must have been a little shot of water in the fuel, maybe a plug got a little bit of metal and shorted. I landed and met the truck and crew with the newspapers.

I took off in time to see a sunset that would have made Monet reach for his brushes. I was climbing through 3,000 feet when the left engine started the muttering again. This time it lasted for about 10 seconds, and then smoothed out. I had planned to stop at 6,000 feet but decided to go on up to 8,000.

By the time I got to 8,000 it was dark, which makes leaning the engines easy. You can see the exhaust stack on the left engine, and you lean to make a nice blue-tinged flame. To do the right engine you can see the flame in the reflection of the windshield. The engines were in sync, and the air was smooth as glass.

Bam! The cockpit lit up as if I had turned on the inside light. The airplane yawed to the left. I looked out at the left engine—white and yellow flames were coming from the exhaust. Flames extended beyond the trailing edge of the wing. Training for these unexpected events is what we do, so the brain says: forward, forward, forward, identify, verify, then fix it or feather it.

Not so fast. An old pilot who has flown in three wars once told me to count to at least 10 before you start yanking levers. I think this is good advice, because there have been many instances in which an excited pilot shuts down and feathers the “good” engine. Meridian was 20 miles ahead. I was at 8,000 feet with one good engine. Maintaining altitude might be a problem, so continuing to Jackson was not an option, but I had time to work on the problem with the left engine.

Three-degree bank into the good engine; rudder trim to get the pressure off my right foot; maintain heading, airspeed, altitude if possible; now work on the problem.

I called Memphis Center and told them that I had a problem with the left engine, but did not want to declare an emergency. I ignored the right engine and went to work on the left. Mixture rich, flame got longer; reduce power, flame got shorter; increase power, flame got longer. Memphis Center handed me over to Meridian Approach. I got two questions from the next controller. “What are your intentions?” and “Do you wish to declare an emergency?” I explained that I would like to land at Key Field and I had everything under control and would not declare an emergency. He told me to plan for a visual to Runway 22. Two-Two is 4,599 feet long and it would be an almost straight-in approach.

I was down to 2,500 feet with the runway in sight when Approach turned me over to Key Tower. Landing checklist complete, including making sure the tailwheel was locked, I started my descent to the runway. I made a wheel landing and then the left turn but without a left engine to straighten up, I could go no farther. I shut down the fine old Pratt engine.

I had time to think about all that had occurred and figure out my mistakes. The big one was not declaring an emergency. When an emergency is declared, the controllers have a lot more options to offer a pilot. Given the circumstances, Runway 19 would have been a better choice; 10,000 feet of runway can take care of a lot of mistakes on the approach. Things I did right: listening to my instincts was important; climbing the extra 2,000 feet to give me more options, and counting to 10 before doing anything would be a close second.

Oh, by the way, the engine had swallowed an exhaust valve, and nothing I could have done from the cockpit would have fixed it.

Ron Davis is a commercial pilot, flight instructor, and A&P mechanic with 6,500 hours in everything from J–3s to DC–3s. He lives in Rayville, Louisiana.

Digital Extra: Hear this and other original “Never Again” stories as podcasts every month on iTunes and download audio files free from our growing library.