Get the app Get the app
Already a member? Please login below for an enhanced experience. Not a member? Join today
News & Media Quick Look: Cheyenne III/IIIA

The first of the “big” Cheyennes

Last month, we looked at Piper’s Cheyenne II. This month, we take another step up the Cheyenne pyramid. 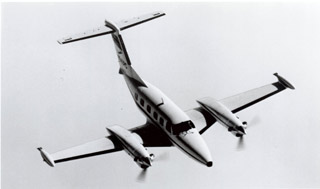 Last month, we looked at Piper’s Cheyenne II. This month, we take another step up the Cheyenne pyramid. The PA–42 Cheyenne III was unveiled in 1977 to compete with the Beech King Air 200. The largest and fastest Piper of its era, the Cheyenne III typically seats six passengers, but has the ability to accommodate up to nine.

The Cheyenne III is longer, and has a greater wingspan than the Cheyenne II, and is equipped with more powerful 720-shaft-horsepower Pratt & Whitney PT6A-41 turboprops. However, the primary visual difference between the II and III is that the latter has a T-tail. King Gold Crown avionics and Hartzell Q-Tip propellers were standard equipment on the III.

First flight of the Cheyenne III took place in May 1979, FAA certification occurred in early 1980, and deliveries began in June of that year.

Cheyenne III pilots say the aircraft handles well and, unlike the Cheyenne II, the larger airplane does not need a stability augmentation system. Passengers like the Cheyenne III’s longer, relatively quiet cabin; best-in-class 6.3-psi pressurization system; and ample luggage storage capability. However, the Cheyenne III’s takeoff and high-altitude cruise performance weren’t as good as the King Air 200’s. That situation, combined with problems with the airplane’s fuel controls, electrical, and air conditioning systems, led Piper to introduce the improved PA–42-720 Cheyenne IIIA in 1983.

The Cheyenne IIIA, which was FAA certified in March 1983, features 720-shaft-horsepower PT6A-61 turboprops, which enable the improved aircraft to cruise at 305 knots. Compared to the III, the IIIA has a higher service ceiling (35,000 feet); upgraded electrical system, air conditioning system, and fuel controls; and higher gross weight (11,200 pounds).

Besides general aviation operators, the Cheyenne III/IIIA has been flown by several airlines and government agencies. Lufthansa, Alitalia, and the Civil Aviation Administration of China’s Flying College have used the large Piper twin turboprops for flight training. The U.S. Drug Enforcement Administration and U.S. Customs Service have flown special surveillance versions of the aircraft.