Get the app Get the app
AOPA Members DO more LEARN more SAVE more - Get MORE out of being a pilot - CLICK HERE
News & Media Aircraft maintenance: Cold weather checkup 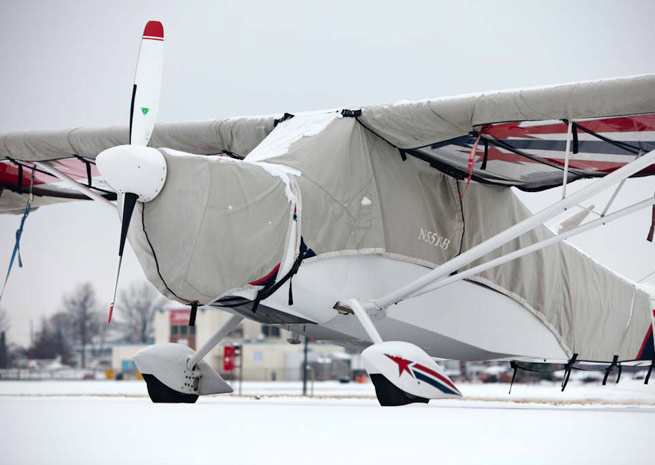 It’s been a long, cold winter for those of us in the northern latitudes, and while the days are growing longer and the snow is melting, old man winter still has one last grip on some of the country. Maintenance in the cold is not much fun, and even the most careful pilots face the temptation to abbreviate preflight inspections when the temps go south.

That said, even late-winter presents a number of unique challenges to the aircraft’s systems, and it pays to take the time to do what you can to protect your aircraft (and yourself) while we’re still in winter’s grip.

Preheat everything you can

In our last segment, we talked extensively about pre-heating. However, our focus was mainly on the engine. Other parts of the aircraft are just as susceptible to cold-starting, particularly the gyros. Typical vacuum gyros spin at 10,000 to 15,000 rpm, and electric gyros spin at around 8,000 rpm. Spinning up to those speeds in very cold temperatures can cause premature wear of the gyros bearings. This represents real money, since even a basic gyro overhaul can cost hundreds, with an overhaul of a complex autopilot gyro, such as the venerable KI 256, can cost thousands.

Avionics aren’t the only aircraft parts that suffer from the cold weather blues. I remember getting in my Grumman years ago on an exceptionally cold day, pulling the canopy closed and hearing the distinctive “crunch” of the canopy interior plastic shattering at about 10 degrees Fahrenheit. Had the cabin been warmed, that would not have happened.

Fill the tanks and check the sumps

One of the greatest risks of cold weather flying is the difficulty of eliminating water from the fuel system in below-freezing temperatures. Temperature fluctuations above and below freezing are particularly conducive to condensation forming in half-empty tanks, turning to ice in low spots in the tanks and lines which will not drain when checked during preflight.  The risk is that the ice melts during flight, causing water ingestion and engine roughness or failure. Your best protection is to keep the tanks full and use any above-freezing opportunity to drain the sumps of any accumulated water. That means that when you encounter a warm break in the cold weather, make a point of going to the airport and draining the sumps even if you don’t have the time to fly that day.

The same temperature fluctuations that cause condensation in the tanks can affect the engine, especially since you already have water in the oil from the combustion process. Don’t delay oil changes just because it’s cold out. It really pays to have clean oil during the winter and if it’s been more than three months since the last change, do it now.

One of the most common issues I see all winter long is low tire pressure. Just take a stroll at your local airport and you’re bound to see a lot of low tires. There really isn’t any good excuse for this and it can cause lots of problems, including reduced take-off performance, danger of slippage or blow-out on landing, and generally increased tire wear. Check those tires regularly. And, try to avoid leaving the plane parked in the exact same position for long periods of time. Tires will more easily take an out-of-round “set” in colder temps. This isn’t a permanent condition, but it can make your first takeoff and landings rather lively.

Tires aren’t the only pressures that matter in winter. Nitrogen-charged oleo struts can change height with temperature, yet most maintenance manuals specify the height as the measure of proper inflation. This means that you may have to adjust based on the seasonal temperatures. Accepting low struts during the winter is only asking for trouble. It’s also important to keep the exposed chrome strut piston as clean as possible to reduce wear and subsequent fluid leakage.

As noted earlier, cold plastic cracks easily. So be especially gentle, but also keep an eye on all exterior plastic fairings. The cold, coupled with a few ice chunks or snow encounters can easily damage plastic fairings, and you’ll want to catch any issues before you takeoff. I recall one particular case where it wasn’t until we were pushing the airplane into the tiedown that we realized that the entire rear portion of the right-main plastic wheel fairing was no longer with us. I can only imagine how the recipient felt on its arrival.

The bottom line is that everything is more difficult when it’s cold outside, so the temptation to abbreviate or postpone inspections and maintenance is something that has to be countered with the dedication to do it right, regardless of the conditions. After all, you can always warm up with hot chocolate and hangar talk once you’re safely back from a great winter flight!