Get the app Get the app
Already a member? Please login below for an enhanced experience. Not a member? Join today
News & Media Training Tip: Power check

Takeoff is an exhilarating moment, representing the culmination of the planning and preparation that helped you make the decision to launch on your flight. The engine responds lustily as you throttle up to full power for the sprint down the runway, followed by rotation and, finally, flight!

That’s the lyrical version of events. But there’s much more to it than that. As the takeoff run proceeds, your feet work the rudder pedals, and your hands control ailerons and elevator to maintain direction, neutralize any crosswind, and perform a smooth rotation. Your eyes are directed mostly outside, but engine gauges and, of course, the airspeed indicator, get quick checks.

Meanwhile, your eyes and your ears—and perhaps other senses—combine to deliver cues about a crucial condition:  Is your aircraft’s engine delivering the power expected of it?

"It is important to check full-throttle engine operation early in the takeoff run," says the Pilot’s Operating Handbook for a 1980 Cessna 152. "Any sign of rough engine operation or sluggish engine acceleration is good cause for discontinuing the takeoff. If this occurs, you are justified in making a thorough full-throttle static runup before another takeoff is attempted."

Do you make it a point to check for full engine power during the busy takeoff phase, with its multiple tasks? Don’t ignore that duty simply because the runup you performed (at lower power) before takeoff was satisfactory.

Suppose something does cause you to discontinue a takeoff. What should you look for in a full-throttle static runup after returning to the run-up area?

You must make sure the engine can reach the rpm range stated by the manufacturer for a ground runup as you hold the brakes and apply full throttle.

"If the aircraft can’t reach this rpm range on the ground there may be a problem with the tachometer indication or something wrong with the engine. Possible problems include a worn propeller (fixed-pitch), improperly set propeller governor (constant- speed), mis-timed magnetos, fouled spark plugs, clogged fuel injector nozzle, or a blocked muffler," explains the Air Safety Institute’s Safety Advisor on engine operations.

Let those tips help you raise your engine-operating knowledge for that next takeoff. They will also help you explain the procedures for your specific aircraft to the designated examiner who will observe your takeoff technique on your upcoming flight test. 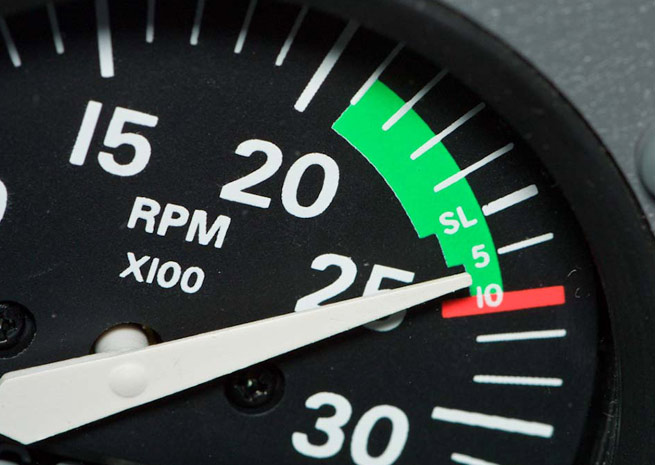