Get the app Get the app
Get the latest news on coronavirus impacts on general aviation, including what AOPA is doing to protect GA, event cancellations, advice for pilots to protect themselves, and more. Read More
Already a member? Please login below for an enhanced experience. Not a member? Join today
News & Videos Leaping forward

When the Cessna Citation M2 was first announced, I was skeptical. I wasn’t sure it was different enough from the Mustang/CJ1+/Phenom 100 for it to be a significant player in the lower end of the light jet market. I was wrong. In fact, the M2 seems to reset the bar for owner-flown light jets.

The Citation M2 is the newest light jet to enter the market from Cessna in more than three years. The M2 is an upgrade to its predecessor, the CJ1+, in every sense of the word upgrade: a new cockpit; a new interior; new performance; and sporty winglets, giving the M2 a new and distinctive look.

Our demo flight of the M2 started out of Cessna’s Indepen-dence, Kansas, factory. Weather conditions for the day were picture perfect, with sky conditions clear and an ambient temperature of 12 degrees Celsius. Our takeoff weight of 10,000 pounds was well below the M2’s maximum gross weight of 10,700 pounds.

Cockpit ingress and egress of the CJ1+ was and still is an area of frequent complaint by its operators. Cessna addressed those complaints with a notch in the inboard seat leg support and by pulling in the center console, which make getting in and out of the M2 cockpit a breeze. In addition, the pilot seat is Cessna’s next-generation seat also found in the M2’s much bigger brother, the CJ4. Cessna further redesigned the cabinet behind the seat to allow for the pilot seat to recline, another big improvement over the CJ1+.

I liked the new leather-wrapped yoke, different from previous Citations, and it didn’t take long to get comfortable with the switch layout. The lower switch panel looks more like a Mustang or CJ4 lower switch panel. The switch count is significantly reduced as well, because many of the system functions have been incorporated in the Garmin G3000 integrated cockpit (pressurization, FADEC control, ignition control, air conditioning, lights, and system test). 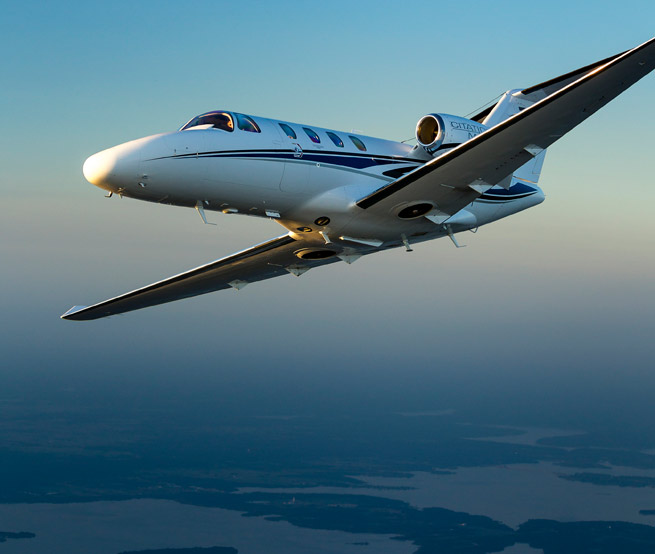 For the first time ever in a light jet, airborne weather radar can be overlaid onto a moving map, and XM weather can be displayed simultaneously. This can be on the split-screen PFD or on the MFD. In addition, we can compare XM weather and weather radar side by side on the MFD. This feature has long been wished for by just about any pilot who has had both pieces of data in the cockpit, but was unable to compare them side by side.

After a few minutes at altitude, it was time to bring the M2 down below Class A airspace to see how the jet handled various maneuvers. We put the M2 through an airwork series that included steep turns, slow flight, and single-engine operations. The handling characteristics were benign and easy to manage. We flew the RNAV Runway 17 approach to test some of the new features found in the G3000’s missed approach logic.

Cessna and Garmin have changed the game with respect to reducing workload during missed approaches. The most significant change is the much-anticipated logic change when you push the Takeoff/Go Around (TOGA) button on the thrust lever when initiating a go-around. When TOGA is activated, here is what happens: Lateral mode goes to FMS/NAV (versus GA in G1000 and Collins ProLine 21), and vertical mode goes to Go Around (GA) (pitch up around 7 degrees). The procedure looks like this: push TOGA, power up, clean up, push FLC on the autopilot. When we hit FLC, the autopilot defaults to the predetermined climb speed found in the VNAV profile (in this case, either 200 KIAS or 220 KIAS). That’s it! This all assumes that VNAV is armed prior to the missed, which it generally is during normal operations.

Compare this to what we do in ProLine-equipped jets: push TOGA, power up, clean up, switch NAV source to FMS, engage NAV mode on autopilot, activate FLC mode, roll the pitch wheel until you hit your desired climb speed.

After completing the missed approach, we entered a visual pattern at Independence and brought the jet in for a normal landing. Upon landing, we went to maximum braking to test the M2’s stopping capability. From touchdown to stopping was less than 1,500 feet. The M2 should have no problem meeting its advertised sea-level landing distance of 2,640 feet.

Cessna spent a significant amount of time and energy upgrading the interior of the M2. Potential owners are given several interior combinations to choose from, making the interior specification process more like choosing a car interior versus the often complicated and time-consuming process of specifying each individual component.

The M2 comes standard with two seats in the cockpit and four club seats in the main cabin. The standard configuration also includes a sideways-facing seat at the door and a belted lavatory in the aft section of the jet. There is an option to remove the sideways-facing seat and replace it with a large refreshment center. Cessna also has made some of the optional higher-tech equipment features found in its larger jets—including airborne Wi-Fi and Cessna’s Clarity cabin management system, among others—available as options for the M2.

Because the first few M2s are being delivered to their owners as this issue goes to press, it will take some time to get feedback from operators. However, if Cessna’s track record of building reliable, efficient, and cult-driving products is any indication of the company’s future, the M2 will be a marked success for the company. 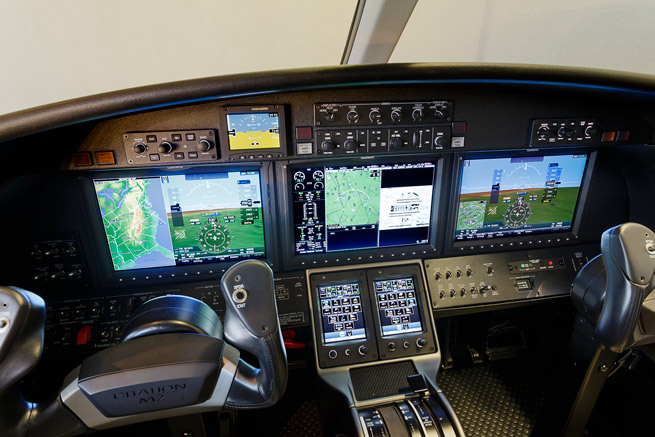 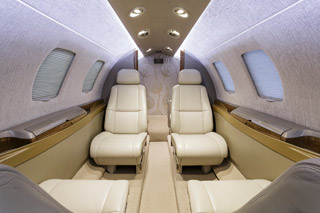 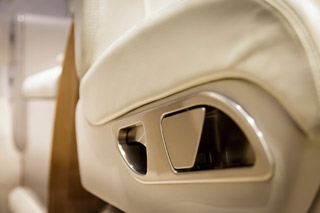 The initial block of M2s all are being delivered with the same bleed-air-powered windshield heating system as found in the CJ1+. The new electric windshields (the same as on the Mustang and CJ4) will be introduced into production later in 2014. As a result, the pneumatic control system knobs and switches on the lower panel will be removed, and replaced with a simple on/off switch for the windshield heat.

The dual Garmin Touch Control (GTC) panels are easy to reach and use. The autopilot is controlled through a central autopilot control panel. The panel is similar to what is found on any three-screen Garmin G1000 cockpit.

Underneath each pilot armrest, Cessna added a “yoke-free” push-to-talk switch, similar to what is found on the Embraer Phenom 100 glareshield. There’s no need to lift your arm off of the armrest when making a radio call while flying on autopilot. 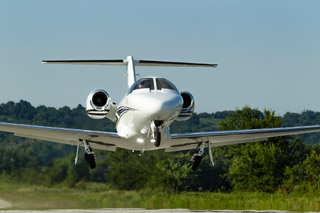 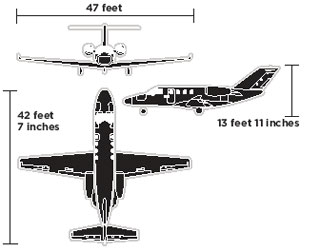