Get the app Get the app
Already a member? Please login below for an enhanced experience. Not a member? Join today
News & Media Safety pilot landmark accident: See and avoid?

Conflict alerts should be given the highest priority

See and avoid is the basis upon which visual flight rules (VFR) are based. It works much of the time, but it has significant limitations. 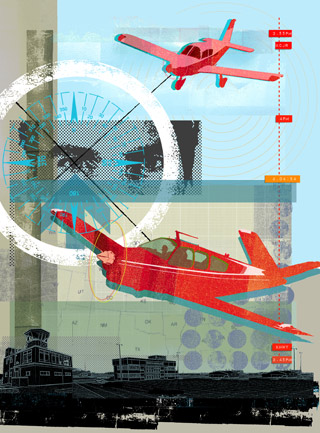 See and avoid is the basis upon which visual flight rules (VFR) are based. It works much of the time, but it has significant limitations. For a variety of reasons—including aircraft blind spots, weather and/or light conditions, limitations of the human eye, intercept angles, traffic density, scanning skill, and pilot diligence—see and avoid is dependent on a variety of factors, some of which we can control and some that we can’t.

Air traffic control exists to keep aircraft apart, and the system works well—most of the time. The VFR advisory aspect—VFR radar advisories or VFR traffic advisories, frequently called flight following—is not nearly as well defined as the IFR rules, and there is perhaps some ambiguity on services that are being provided or should be provided.

The flights. A Beechcraft V35 Bonanza departed Warrenton-Fauquier Airport (HWY) in north-central Virginia at 3:45 p.m. EDT with a pilot and a flight instructor to conduct a flight review. The Bonanza, squawking 1200, climbed to 3,000 feet msl. VFR flight following was neither requested nor required. At 3:55 p.m. the Beech was 13 nautical miles south of Culpeper Regional Airport (CJR). At this time, a Piper PA–28-140 Cherokee departed Culpeper VFR climbing eastward. At 4 p.m., the two aircraft were separated by 600 feet vertically and 0.9 nm laterally. It’s unknown if either pilot saw the other, or whether they were on the same radio frequency.

At 4:01 p.m. the Piper pilot contacted the Potomac Terminal Radar Approach Control (Tracon) to request an area navigation (RNAV) approach to Warrenton-Fauquier. He was asked to stand by while the controller coordinated the crossing of two IFR aircraft. Additionally, two other VFR aircraft were nearby.

At 4:02:19 the Piper was given a discrete transponder code, which displays the aircraft tail number, altitude, and speed on the radar scope. A relief controller took over the position and the hand-off briefing between the two controllers started at 4:02:34 p.m. but was interrupted by a radio call. The briefing included arrivals and departures from Washington Dulles International (IAD) and Manassas Regional (HEF) airports, the previously mentioned crossing IFR traffic, and the Piper’s request for an RNAV approach. The relief briefing concluded at 4:03:18 p.m.

The new controller asked the Piper to identify and to confirm the airport and type of approach requested. The pilot complied but the controller, missing the ident, asked for it again at 4:03:33 p.m. He then focused on another aircraft destined for Manassas.

At 4:04:08 p.m. an audio conflict alert sounded for five seconds advising close proximity between the Cherokee and Bonanza. A visual alert also appeared and remained illuminated. The Beechcraft was climbing slowly southbound, about 500 feet below and approximately 0.9 nm east of the Piper. The controller noted the vertical spacing, assessed no conflict, and returned to separating the two IFR aircraft.

From 4:04:10 p.m. to 4:04:54 p.m., the controller spoke with several IFR aircraft, which included resolving a crossing conflict, providing a level-off altitude, several frequency changes, acknowledging a check-in, providing an altitude assignment, and issuing landing sequence information. At 4:04:54 p.m. the controller, having completed primary separation duties with his IFR aircraft, advised the Cherokee pilot of the radar identification and asked him to climb to 3,000 feet because of traffic in the area. There was no response because the collision had already occurred.

The crash. The Cherokee and the V35 collided on a 45-degree convergent path from the Piper’s left side. Field-of-view analysis showed there was a high likelihood that each aircraft was visible to the other. No view-limiting devices were being used and there were no indications that either aircraft saw or maneuvered to avoid the other.

The Piper’s propeller severed the V35’s fuselage aft of the pilots’ seats, and parts of the ruddervator and the Beech’s empennage embedded in the Piper’s fuselage. The Bonanza went out of control, resulting in the loss of the pilot and CFI. The Cherokee’s engine stopped and, although the pilot suffered some injuries, the ensuing forced landing was successful. A shoulder harness retrofitted to this older aircraft would have reduced those injuries significantly.

Factors. The Bonanza pilot, an NTSB employee, had more than 1,600 hours total flight time, and the CFI had in excess of 4,000 hours. The Piper pilot, an FAA employee, had just more than 11,000 hours. All were properly certificated, qualified, and there were no medical or fatigue factors. Because of the potential conflict of interest, the Transportation Safety Board of Canada conducted the investigation in place of the NTSB.

Both aircraft were properly maintained, with functioning Mode C transponders, and there was no evidence of any preimpact malfunction. Neither aircraft had any supplemental collision avoidance devices on board. Weather was not a factor, with visibilities greater than 10 miles and clear skies.

Airspace and procedures. The flight paths of both aircraft and the collision occurred in Class E airspace. IFR aircraft receive ATC separation from each other, but in visual conditions pilots still must see and avoid VFR aircraft. Workload permitting, ATC will advise IFR aircraft of conflicting VFR traffic. VFR aircraft are responsible to see and avoid at all times. VFR flight following is relegated to the bottom of the workload food chain. The services are provided only if the VFR pilot requests and if the controller is able to provide. Assistance consists of advisories, not separation.

Similar guidance is provided in the Aeronautical Information Manual. Section 4-1-16 of the AIM states in part, “A safety alert will be issued…if the controller is aware the aircraft is at an altitude which, in the controller’s judgment, places the aircraft in unsafe proximity to terrain, obstructions or other aircraft…this service is contingent upon the capability of the controller to have an awareness of a situation…. The issuance of a safety alert cannot be mandated, but it can be expected on a reasonable, though intermittent basis. Once the alert is issued, it is solely the pilot’s prerogative to determine what course of action, if any, to take. This procedure is intended for use in time-critical situations where aircraft safety is in question.”

Probable cause. According to the Canadian TSB, “Neither pilot saw the other aircraft in time to avert a midair collision, likely because of the inherent limitations of the see-and-avoid principle. Following the receipt of a conflict alert, the controller assessed that there was no conflict between the two visual flight rules (VFR) aircraft and therefore did not issue an immediate safety alert. Subsequently, the controller was busy communicating with several instrument flight rules (IFR) aircraft, which precluded further monitoring of the two VFR aircraft. In the absence of a means of alerting visual flight rules (VFR) pilots to potential conflicts to enhance the current see-and-avoid technique, the risk for midair collisions remains.”

There’s much more to the report, but the essence is that the “big sky, little aircraft” theory is what keeps the collision numbers low.

Commentary. Since 1994 the number of midair collisions has declined from about 15 annually to about eight annually. It’s not a big number, but twice as many aircraft are involved since it obviously takes two to tangle. About half of these accidents result in fatalities, but that is merely because of luck. Reduced flying activity and more traffic alerting systems of various capabilities are my guesses for the decline.

As noted before, see and avoid works only when pilots see the target—and the reality is that we don’t always. Training and discipline will help, but they will not greatly reduce the collision risk potential, in my opinion.

The TSB and NTSB noted that ATC can help by issuing a conflict alert regardless of whether the aircraft are VFR or IFR. The FAA is considering that change. My take: It should assume the highest priority. Not all aircraft can or should be talking to ATC, so it’s a partial solution. However, the ATC tools exist to prevent more collisions, and that is a higher priority—in my view—than anything else a controller could be doing, IFR or VFR.

Having flown with various noncertified traffic awareness systems, even though they aren’t perfect and do not show all traffic, they are a huge improvement over what I am able to spot on my own. Every pilot I’ve spoken with is amazed at the amount of traffic they don’t see, even after the system points it out.

There are efforts being made to bring low-cost ADS-B to light GA. We urgently need the help of both the FAA and the manufacturers to accelerate a cost-effective reality of eliminating midair collisions.

A Beech Bonanza and a Piper Cherokee collide in day VFR conditions. One aircraft is in contact with ATC but the controller is distracted by high workload and fails to issue a warning after the conflict alert sounds.

No view-limiting devices were being used and there were no indications that either aircraft saw or maneuvered to avoid the other.