Get the app Get the app
Already a member? Please login below for an enhanced experience. Not a member? Join today
News & Media Decision time: Flatlanders and runway analysis

It’s not just for the mountains

There’s a common assumption that if a light jet pilot operates mostly in the flatlands of the Northeast, Midwest, or South there’s no need for runway analysis (RA). 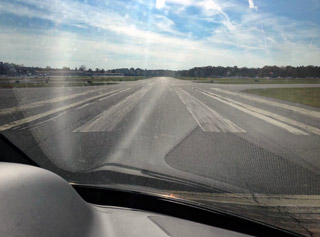 There’s a common assumption that if a light jet pilot operates mostly in the flatlands of the Northeast, Midwest, or South there’s no need for runway analysis (RA). The vague idea is that, sure, for guys who spend several months a year in Aspen or Vail, RA is potentially useful in that it may let someone depart with a little more weight, but there’s just no point having RA if all you do is operate well away from the mountains. Unfortunately, this belief is not only widely held, it’s also completely untrue.

Take the case of several weeks of training I conducted last summer at the Caldwell, New Jersey, airport in a common light jet. Caldwell’s main runway (4/22) is 4,552 feet long; most pilots would look at it and think it’s a touch short, but likely OK unless the temperature is pretty hot. Indeed, if you look at the official takeoff distance charts in the aircraft flight manual (AFM) or use a popular third-party app to calculate takeoff distance, you’d see the airplane could depart at maximum takeoff weight (MTOW) up to 32 degrees Celsius, intuitively making sense for the runway length.

However, many pilots have forgotten that using AFM data will respect only two of the three takeoff performance limits that must be considered—runway length needed and certification engine-out climb requirements. Said certification requirements are minimal; all a light jet manufacturer must demonstrate is that for a given weight, altitude, and temperature (WAT) condition, the test pilot can achieve roughly 200 to 300 feet per minute of climb on one engine.

The problem at Caldwell is this—there’s a very small hill off the end of Runway 22, with some tallish trees and an office building. It’s not terribly tall as things go, but it is close to the departure end of the runway. To actually clear the obstacles off the end of Runway 22, a climb rate more than three times the certification minimum is needed.

The only way to know this is through the use of runway analysis, which uses the airplane’s actual engine-out performance for a given WAT condition, and compares it to the actual terrain and obstacle environment around the airport. Sure enough, when we look at the RA data, the story is very different than what the AFM alone would tell. Departing Runway 22, a MTOW departure is only possible up to 14 degrees C. At 32 degrees C, where the AFM might lead us to believe MTOW is OK, we would actually need to offload 1,000 pounds of fuel to safely depart.

Simply put, a pilot using AFM data only, and departing at MTOW with a temperature above 14 degree C, will hit the hill at the end of the runway if an engine fails just prior to rotation! This is why RA is needed more often than might be supposed. Many pilots are flying around with no idea whether terrain could be cleared on one engine or not. Even at sea-level flatland airports, it’s surprisingly often that obstacles won’t be cleared at high weight and temperature combinations. 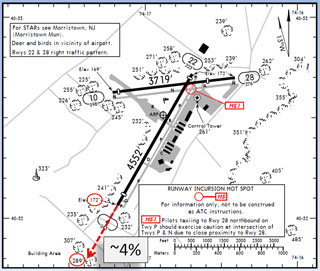 Here we are, about to begin the takeoff on Runway 22 (above) at Caldwell, New Jersey’s Essex County Airport (right). That little hill dead ahead looks pretty benign. But lose an engine at V1 on a max-gross takeoff and you could hit it. You won’t know if you’ll clear it unless you calculate the airplane’s actual engine-out performance under the prevailing weight, altitude, and temperature conditions. In this case, you won’t make it at MTOW if the temperature is above 14 degrees Celsius, or 57 degrees Fahrenheit.

Reproduced with permission of Jeppesen Sanderson, INC. NOt for navigational use © jeppesen sanderson, inc. 2014