Get the app Get the app
AOPA Members DO more LEARN more SAVE more - Get MORE out of being a pilot - CLICK HERE
News & Media Quick Look: King Air 100

Beech has a long history of introducing successful derivatives of the King Air, the world’s most popular business twin turboprop. 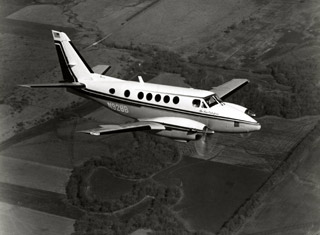 Beech has a long history of introducing successful derivatives of the King Air, the world’s most popular business twin turboprop. The upgrades started only a few short years after the venerable airplane was introduced a half century ago. While the King Air 200 has been the mainstay of the Beech turboprop fleet for decades, the King Air 100 was the first stretched iteration of the original King Air 90.

First flown in March 1969 and initially delivered in August of that year, the King Air 100 is powered by the 680-shaft-horsepower Pratt & Whitney PT6A-28, and features a fuselage that is four feet, two inches longer than the King Air 90’s. It has five circular main-cabin windows, plus one oval window aft. The Model 100 utilized the tail, landing gear, larger rudder, and shorter wings—with wing fences—of the Beech 99 airliner, as well as new fuel, pressurization, and heating systems.

Eighty-nine King Air 100s were built before the design was succeeded in 1971 by the Model A100, which had a higher gross weight of 11,500 pounds (900 pounds more than the Model 100) and 96 gallons more fuel capacity, which increased range. The use of four-blade, full-feathering, reversible, constant-speed Hartzell propellers resulted in lower vibration and cabin noise levels, compared to the three-blade props used on the Model 100.

Typically, A100s were configured to carry six to eight passengers, but the aircraft could accommodate up to 13 passengers in a high-density layout. A lavatory and 62-cubic-foot baggage compartment were located aft. Standard avionics on the A100 were dual King Gold Crown, but some owners opted for Collins radios. The A100 first flew in March 1970, and initial deliveries took place in October 1971.

Like Beech had done with the King Air 90, the manufacturer developed specialized versions of the A100, including models designed for navaid inspection and calibration, and for aerial photography. The U.S. Army acquired several A100s, operating them under the U-21F designation.

While numerous aftermarket companies have focused on developing improvements for the King Air 90 and 200, some providers also have developed A100 modifications. For example, Raisbeck Engineering offers its Epic performance package, which includes quiet turbofan propellers, dual aft body strakes, nacelle wing lockers, and fully enclosed high-flotation landing gear doors. Another popular mod for A100s is Frakes exhaust stacks, which can increase airspeed by up to five knots.

Robert A. searles is a writer specializing in commercial, military, and general aviation.