Get the app Get the app
AOPA will be closed July 4th, in observance of the Independence Day holiday. We will reopen at 8:30 am ET on Tuesday, July 5.
News & Media Test Pilot

1. What aviation safety device was regarded as a gadget, rejected when first introduced in 1931, and considered only for use in an amusement park? 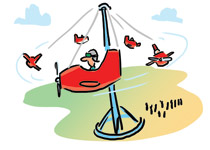 1. What aviation safety device was regarded as a gadget, rejected when first introduced in 1931, and considered only for use in an amusement park?

2. What is the V-speed that represents the minimum indicated airspeed at which an airplane can be made to lift from a runway?

3. True or False: All American fighter aircraft built and flown during World War II incorporated control sticks. In other words, none were piloted using control wheels.

4. If the ambient air at a given sea-level airport is warmer than standard, then the atmospheric pressure will decrease _____ during the first 1,000 feet of altitude gain (everything else being equal).

5. From reader Dorie Schiff: True or False: Of the 12 Apollo astronauts to have walked on the moon, one of them had a mother whose maiden name was Moon.

6. True or False: A pilot on a VFR cross-country flight at night arrives at his destination a few minutes after sunrise. He is required to land with a minimum fuel reserve of only 30 minutes.

7. From reader Pat Hyfield: You probably know the answer to the following question without realizing it. How many rivets did it take to complete construction of the prototype Boeing 747 in 1968?

8. What is the quaint British expression used to describe touch-and-go landings?

1. The Link Trainer (aka the “Blue Box”) was the forerunner of today’s sophisticated simulators. A number of trainers were sold to amusement parks before the Army Air Corps and civilian flight schools began ordering them in 1934.

2. VMU, which is the minimum unstick speed. VMU can be determined in a small airplane using a procedure similar to that for a soft-field takeoff.

3. False. The Lockheed P–38 Lightning had a control wheel.

5. True. Buzz Aldrin’s mother’s maiden name was Marion Moon. Aldrin was the lunar module pilot on Apollo 11 and second to walk on the lunar surface.

6. False. There is no minimum fuel reserve required at the time of landing on a VFR flight. Federal Aviation Regulation 91.151 is a planning requirement, which means that the minimum required fuel reserve must be aboard only at the beginning of a flight. Although imprudent, the calculated fuel reserve may be consumed en route.