Get the app Get the app
AOPA will be closed July 4th, in observance of the Independence Day holiday. We will reopen at 8:30 am ET on Tuesday, July 5.
News & Media P&E Proficiency: Flying the MiG–15

One wrong move and the Mikoyan-Gurevich MiG–15 will bite hard and swift, with catastrophic results. 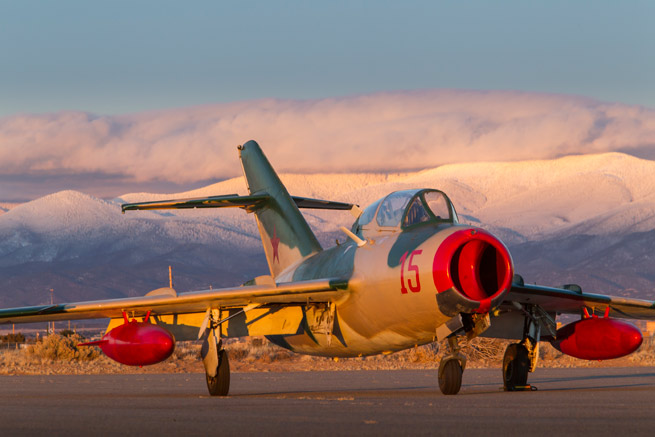 One wrong move and the Mikoyan-Gurevich MiG–15 will bite hard and swift, with catastrophic results. An enemy fighter in generations’ memories, the powerful 1950s-era Soviet jet is unforgiving.

My nerves build as I strap into the MiG–15, fighting thoughts of the jet’s unstable handling characteristics and tendency to overrotate on takeoff that I have studied and been briefed on. The cockpit feels like a booby-trapped cage; hot ejection seats sit atop canisters filled with gunpowder. The MiG–15, which entered Soviet Air Forces service in 1948, was the Soviet Union’s first aircraft with an ejection seat, pressurized cockpit, and swept wing. Most civilians who eject from the jet warbirds do not survive, my instructor Larry Salganek says.

Pilots can fly the MiG–15 in the United States as an Experimental aircraft. Salganek, an experienced jet warbird instructor, examiner, and owner of Jet Warbird Training Center in Santa Fe, New Mexico, offers instruction to private pilots and higher, whether it is for those seeking a thrill or owners wanting to get rated or complete recurrent training. Salganek’s jet that I’m flying is a two-seat SB Lim-2 version of the UTI MiG–15 trainer that was manufactured in the 1950s in Poland. It’s powered by a 5,300-pound-thrust Lis-2SB engine. Salganek has instructed in the jet since 1995 and gave AOPA a complimentary, abbreviated introduction to the type of training he provides to pilots seeking type ratings in the Aero Vodochody L–29 Delfin and L–39 Albatros, Lockheed T–33 Shooting Star, Fouga Magister, and MiG-15.

Salganek straps into the front, while I make this flight in the rear seat of the dual-control MiG–15. Only experienced jet pilots or those who have completed three or four hours of training in the L–29 or L–39 sit in the front on the first flight in the MiG–15 at Salganek’s school. “These airplanes are inherently dangerous,” he says. “Disneyland takes something that’s safe and gives you the illusion that it’s dangerous. We take something that’s dangerous and give you the illusion it’s safe.”

As soon as we start the engine, Salganek sets the timer on his watch: The turbojet engine “burns as much fuel on the ground as it does in cruise.” The jet holds 450 gallons with the drop tanks and burns about 5 gallons per minute, giving us 1.5 hours of fuel on board—or about a 45-minute flight counting start-up, taxi, and required landing reserves.

The turbojet is slow to accelerate; on takeoff I use 1,500 feet of runway before rotation. Pilots have a tendency to overrotate the MiG–15, which can put the aircraft at an angle of attack so high the jet can’t climb or accelerate, causing it to crash off the end of the runway. I barely apply back pressure to lift the nosewheel, perfect for the 5-degree climb-out. The aircraft is stable in pitch, but its ailerons, with hydraulic boost, are easier to roll. As I climb out, Salganek’s words, “Now you’re flying a fighter,” remind me this 45-minute training flight isn’t a dream, but a dream come true.

At altitude, I get a feel for its sloth-like slow-flight characteristics. The MiG wallows while I briskly deflect the stick full left and right at 140 knots. Even with two stall fences on each wing, the ailerons are ineffective at slow airspeeds. (A third row was added to the MiG–17, which considerably helped the low-speed handling characteristics, Salganek said.) It’s an eye opener of what to expect during final approach to landing at 130 knots. The jet will maneuver at low speeds, but the control inputs must be held until the aircraft starts to respond.

Slowing to 120 knots, I stall the jet. It usually breaks to the left, Salganek said in a briefing, but this time the right wing drops. Bring the throttle full forward and slightly lower the nose to recover. After my airspeed increases to 160 knots, Salganek raises the flaps. I feel as if I’m falling tail first toward Earth, but the altimeter never decreases; the climb was just momentarily arrested.

At the upper reaches of the MiG’s speed range (this aircraft’s upper limit is lower because of the drop tanks), it behaves how one would fantasize a fighter moving. I have to apply substantial forward pressure in a powered dive to reach Mach 0.85 before leveling off to perform a series of high-speed turns. Its controls are balanced and crisp, the jet responding to inputs seemingly as quickly as I think them. At these speeds, in steep banks, I feel like we’re going to circle the entire city with the resulting large-radius turn.

Reducing the throttle to 85-percent power and slowing to 240 knots on downwind at 8,000 feet, we lower the gear midfield. Full flaps come in abeam the 1,000-foot markers, the aiming point in the MiG-15, while the aircraft slows to 160 knots. “Now you feel her rockin? That’s one of its features, its wonderful enduring features,” Salganek says. The “slight snaking motion,” as the aircraft basic flight manual describes it, continues through the rest of the pattern. Turning final, I wait to raise the nose to slow the aircraft to a final approach speed of 130 knots, remembering the aileron ineffectiveness experienced during slow flight. I keep the airspeed at 150 knots until I’m lined up on the centerline and level the wings, and then raise the nose. “Gentle movements,” Salganek coaches. “Perfect, you’re doing just perfect.” A couple hundred feet above the runway, Salganek takes the controls to land, because the aircraft has blocked my view of the strip. It takes the full 8,000-foot runway as we roll out, the 1947 brakes struggling to slow the aircraft.

My feet back on the ground, the ejection seat’s safety pin reinstalled, Salganek had helped me successfully tame the jet warbird and, for a moment, fly like a 1950s fighter pilot.

The Jet Warbird Training Center is located in Santa Fe, New Mexico. Civilian pilots can train in an L–29, L–39, T–33, Fouga, or the MiG–15. Any pilot with a current medical can fly a one-hour instructional flight (usually in the front seat) or train toward a jet warbird type rating. Novice pilots can fly a 35-minute orientation flight in the back seat of any of the jet warbirds. Visit the website (www.jetwarbird.com) for more information.