Get the app Get the app
Already a member? Please login below for an enhanced experience. Not a member? Join today
News & Media P&E Technology: Flying the helmet

I had the opportunity to test drive the most expensive helmet of all time—the one designed for the next-generation fighter-bomber, the Lockheed F–35 Lightning II. 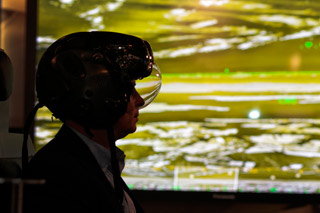 While “Frugal Flier” Dave Hirschman was out scouting the most economical flight helmet he could find (“Hard-Headed Pilots,” page 78), I had the opportunity to test drive the most expensive helmet of all time—the one designed for the next-generation fighter-bomber, the Lockheed F–35 Lightning II. During this low-rate-production period, the helmets cost about $250,000 each, according to Lockheed Martin officials. And while you can buy a young Cessna 172 for that price, be assured that the helmet carries a lot more technology than even a Garmin G1000-equipped Skyhawk.

In fact, the helmet is critical to the F–35’s advanced mission as the nation’s next-generation fighter-bomber. Billed as the most expensive weapons system procurement in history, the controversial F–35 program is years behind schedule and billions over budget, but—wow, what an airplane. With its stealthy presence, Mach 1.6 speed, and—for some models—the ability to take off and land vertically, the Lightning promises to own the sky. Designed as the Joint Strike Fighter, the fifth-generation fighter is meant to replace a host of older airplanes across the U.S. Air Force, Navy, and Marines, as well as fill the need for international partners around the globe.

Filling the needs of all the services means compromises across the board, but standard across all models is the HMD—helmet-mounted display system. I had the chance to fly the HMD and the F–35 demonstration simulator at the Lockheed Fighter Demonstration Center in Arlington, Virginia, just around the corner from the Pentagon. Host Michael (“Otter”) Otterblad placed the HMD on my head. Otterblad is the director of international programs for Lockheed Martin.

I sat still while sensors determined what was level and then as I looked around the room, I could see projected onto the visor ahead of me a simulated world full of military threats, dangerous terrain, and friendly aircraft—each identified by various symbols. The information is fed to the onboard computers by six infrared cameras situated around the F–35 that provide a 360-degree view. Lockheed calls it a Distributed Aperture System (DAS). When I looked behind me I didn’t see the tail of the airplane, but instead what was behind the airplane, as if the tail section didn’t exist. Ditto looking down; I could “see” through the floor to the ground below.

The challenge with the technology is the processing and projecting of the images fast enough that they stay in sync with the brain’s ability to process information, according to Sean Hanrahan, director of corporate strategy and business development at Lockheed Martin. If the computer gets even a little behind, confusion reigns as the pilot must separate what he sees in the real world through the translucent visor from what is seen on the projection. The time lag is measured in milliseconds and after years of development, the computer gets it about right. Also projected on the visor are critical aircraft system and flight information, allowing the pilot to see everything he needs on the visor for every phase of flight.

Of course, the pilot also has the ability to turn DAS off, and Lockheed expects pilots will during less intensive phases of flight. At that point, the pilot is left with a rather conventional-looking aircraft panel, except that it is all a touch screen. The pilot can configure the panel in a multitude of ways, arranging windows here and there to his liking for showing flight instruments, sensor, and engine data. The F–35 uses “sensor fusion” to present the pilot with one comprehensive depiction of what is happening in and around the airplane. And the airplane itself is like a node on a computer network. Through a digital and stealthy datalink, it shares information with other nearby aircraft and ground controllers.

The pilot controls the airplane via a thrust lever in his left hand and a right-side control stick for managing flight controls and other systems. During my demonstration in the simulator I shot a missile at the control tower at Luke Air Force Base, which went up in a satisfying burst of flame and smoke (sorry guys!). All thumbs on the HOTAS (Hands On Throttle and Stick) system, I misfired another missile at an incoming bogey and had to turn toward him and shoot him down with the 25 mm cannon tucked into the fuselage.

With the flip of a switch, the airplane became the Marine B model, which allowed me to approach a ship for a vertical landing. At about 500 feet and as I slowed, the controls automatically switched over to act somewhat like a helicopter cyclic and collective, allowing me to descend slowly to the deck for touchdown.

Two decades after it was first conceived and 15 years after Lockheed Martin won the contract, the airplane is still years away from being ready for military action. The company and the Pentagon insist that management woes and development problems are in the past and that the F–35 project is moving forward smartly for deployment over the next five years.

While most of us flying GA airplanes aren’t likely to see Mach 1.6 anytime soon, the notion of a helmet depicting weather, terrain, traffic, and other essential flight information doesn’t seem so farfetched for our cockpits. Now, about that price point….AOPA

• Lockheed Martin produced the 100th F–35 in December 2013 for delivery to Luke Air Force Base. The first 100 include 44 F–35As for the Air Force, 42 F–35Bs—short takeoff/vertical landing variants for the Marines, and 14 F–35C carrier versions for the Navy.

• The Air Force F–35A models are capable of nine Gs; the others slightly less.

• The range varies from 900 to 1,200 nm, depending on model and using internal fuel tanks.