Get the app Get the app
Already a member? Please login below for an enhanced experience. Not a member? Join today
News & Media Training Tip: Field length finesse

It’s windy today. Whichever runway you select, there will be a crosswind for your takeoffs and landings.

Briefing for the flight with your instructor, you calculate an estimated crosswind component, and review the crosswind-correction methods you have learned. But there’s another key piloting decision that will have to be made, and sometimes it gets less attention than whether to perform a crab, a slip, or a crab-and-slip.

"What flap setting do you plan to use?"

Having reviewed your aircraft’s pilot’s operating handbook the previous evening, you are ready, and explain to your CFI that you may opt for only a partial flap setting, depending on the actual winds while you are flying. The decision, you continue, is based on this passage in your Cessna 172’s POH: "When landing in a strong crosswind, use the minimum flap setting required for the field length."

Your analysis is also based on this brief mention of flap settings in the Airplane Flying Handbook’s discussion of crosswind landings: "Flaps can and should be used during most approaches since they tend to have a stabilizing effect on the airplane. The degree to which flaps should be extended will vary with the airplane’s handling characteristics, as well as the wind velocity."

The CFI is impressed with your preparation, but has another question: "What does field length have to do with it?"

A crosswind landing in strong winds requires the pilot to strike a balance between getting the prompt and precise aircraft responses to control pressures assured by higher approach airspeeds, and making sure not to run out of runway during the touchdown and rollout.

Fortunately, it does not take lots of extra airspeed to get the desired result. Think back to your practice of slow flight. You observed how (and when) control authority decays as you decelerate toward minimum controllable airspeed. You experienced how much yoke and rudder input it takes to overcome the drag produced by flight at such a high angle of attack.

Another difference in technique when landing with partial flaps is the go-around. Probably it will be easier to manage. For many aircraft, landing with full flaps requires a partial retraction of flaps immediately after you add power to go around to assure a positive climb. With only partial flaps deployed for landing, the initial climb may require no configuration change, reducing the pilot’s workload. 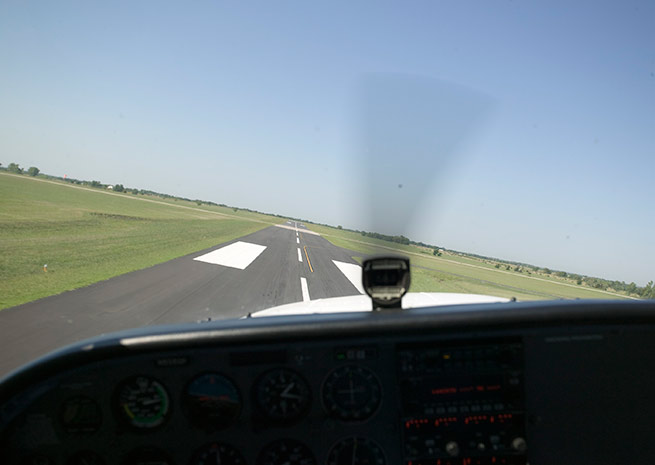