Get the app Get the app
Already a member? Please login below for an enhanced experience. Not a member? Join today
News & Media Same as it ever was

Same as it ever was

Flight training through the years 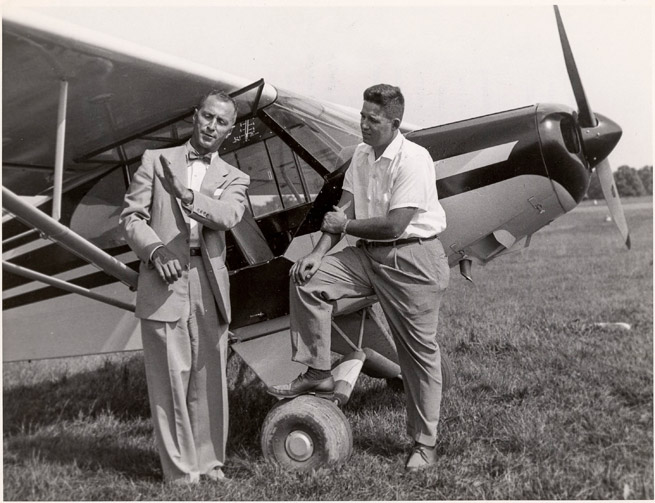 Today someone will walk in to a flight school and plunk down a bunch of money to fulfill a dream. They will be assigned an instructor, shown an airplane, and the lessons will start right away. If it sounds familiar, that’s because it’s what you did when you learned to fly, whether it was 2014 or 1939.

Flight training hasn’t changed much in the past 75 years. Part of the reason is probably because neither have the laws of physics. It’s also because we’re still an activity that begins by learning from one person with a passion.

Ralph Butcher is a former Flight Training columnist who flew fixed- and rotary-wing aircraft in the Army, retired as a check airman from United Airlines, and ran four flight schools. In 1959, at age 19, he fixed up a car and took it to a car show—where a woman offered him $2,500 and a lesser car in exchange. Butcher took his money and immediately went to the airport. There an old-timer said, “Give me $700 and I’ll give you a pilot’s certificate.” There was no syllabus, no briefings, and scant material to study. “The stack of reading material was no more than an inch thick,” he says. “Everything I learned I just had to scratch and dig for in those days.”

Wally Funk learned to fly during the same period but had a different experience. She soloed in 1957 at Stevens College in Columbia, Missouri, and later went to Oklahoma State. She says her instructor used a syllabus, and over the years she’s been able to adapt and expand it. “We knew what we had to do from day one to the time they took their checkride,” she says.

Then, as now, much of the quality of the student’s experience came down to luck. Get a good instructor and you will learn the basics the right way. Get a bad one and you’ll struggle the whole time.

Butcher says it wasn’t until the Army that he really learned how to fly. What he learned, he adapted to his own syllabus, which he took to the various schools he managed. The first three lessons called for the instrument panel to be covered. To him, the wing is the only instrument that matters.

Funk’s training had a similar emphasis on looking outside and attitude flying. She fondly remembers her best lesson from those days. She and another CFI candidate flew up a few thousand feet above the airport at night and shut off the engine. A long deadstick later, the lesson was forever cemented in her flying. “I haven’t found an instructor in years who has given their student the start of a spin or a tough spiral,” she says.

It would be easy to say that glass cockpits have transformed this type of training. And maybe they have. But there is enough of the old guard around to instill basic attitude flying in new students that many are still learning the right fundamentals early on. New instructor Sarah Rovner is one of them. This computer professional and part-time instructor says she loves tailwheel flying, but technology has its place. “The basic skills are important and you should build on top of those,” she says. “I encourage the use of the iPad. You should start doing everything with VORs, but once you master the basics the iPad is a great situational tool.”

Funk has a different view. She still teaches without electronic aids. “I tell all my students to turn off their toys and leave them in the car,” she says.

For an instructor who starts students off with no instruments, Butcher is surprisingly accepting of the modern cockpit—with some caveats. “It sucks the eyeballs out of your head,” he says. “Just imagine you haven’t had anything to eat for 30 days and there’s a stack of Big Macs on the panel.” That’s the trap that he says snares some pilots. His hope is that if students first learn to fly the wing, they have an easier transition to glass.

Butcher’s even more accepting of simulation and computer-based training, two advances he says have significantly improved training. The school he was running in 2009 even stopped holding ground schools because of what he characterizes as excellent computer-based training software. They used the Cessna course, which is one of dozens now available to students, many of whom are learning when and where they want on mobile devices.

Of all the training evolutions, simulation probably is the biggest leap forward. The promise it holds is one of more efficiency, more students per instructor, and less expensive pilot certificates. These transformations have been painfully slow. The Link trainer was used in pilot training during World War II, and general aviation simulators have been around for 30 years. Recent increases in computing power and displays have made them increasingly realistic for a lower cost. Today a school may own a simulator, but it’s likely only a small part of an official syllabus, and its use is restricted mainly to instrument training.

Rovner’s experience is typical. She used a simulator in her training, and continues to do so with her students. But far from simulator-led training and an ability to take on more students, she says simulators have limitations and the amount of simulator time the FAA allows to be credited toward private and instrument certificates is appropriate. “It still has to happen in the airplane,” she says.

Funk doesn’t use simulation. “I’m from the old school,” she says.

But to hear her describe her teaching method of repetition, proper airplane control before instrument training, and complete pre- and postflight briefings, the old school sounds an awful lot like the new school. It should then come as no surprise that she continues to solo students in fewer than 10 hours.

When Wolfgang Langewiesche’s Stick and Rudder was published in 1944 it immediately became the standard text on the fundamentals of flying. It remains a best seller, and most of the respected materials produced today echo its concepts, if not the now-homey language. The song remains the same, and so too does the way we teach it.

AOPA has been involved in efforts to support flight training almost since its first day. In fact, one of the association’s first political acts was to advocate for the Civilian Pilot Training Program, a pre-World War II pilot training initiative that greatly expanded general aviation.

What is today’s Air Safety Institute launched in 1950. With a safety-oriented mission, everything it creates has flight training at its core. Today that takes the form of interactive online courses, quizzes, videos, and live seminars.

Throughout the years AOPA has taken on hundreds of policy issues related to flight training, including everything from advocating for tax advantages to squashing state regulations that would make training more burdensome.

Likely the most visible and long-lasting commitment to the flight training industry began in 1999 when AOPA purchased Flight Training magazine from the Specialized Publications Company. Since then the magazine’s message about the fundamentals of flight has been shared with a wider audience and a group of sister efforts has formed alongside, including the Flight School Business newsletter, an active Facebook group, a blog, videos, and much more.

AOPA knows that the flight training industry is key to a healthy pilot population. The association recently launched a number of new initiatives to support student pilots and flight schools, coming full circle to an initial effort that propelled aviation forward at a critical time. —IJT