Get the app Get the app
Already a member? Please login below for an enhanced experience. Not a member? Join today
News & Media Letters: GA Aircraft Reimagined

Memories rushed back to members when they read of our 2015 sweepstakes aircraft, a Reimagined Cessna 152, and many shared their recollections with us.

Memories rushed back to members when they read of our 2015 sweepstakes aircraft, a Reimagined Cessna 152, and many shared their recollections with us.

We lived in a small town in Mississippi when I started taking flying lessons at age 15. The airplane was a 1963 Cessna 150 and, as I recall, rented for $7.50 an hour wet. After soloing and accumulating around 28 hours, my dad was transferred to Maryland. After one lesson at Friendship Airport (now BWI), I looked for someplace smaller and discovered the Frederick, Maryland, airport (FDK). The Cessna Pilot Center had newer 1971 L Model 150s. During my first preflight, I was looking around the cockpit and when my instructor asked what I was looking for, I said, “the flap handle.” He laughed and pointed to the electric flap switch on the panel. Besides soloing, my most memorable flight in a 150 was returning to Frederick from Hagerstown where I had to go to take my private checkride. Yes, I passed.
Billy Fletcher
AOPA 6061764
Ocala, Florida 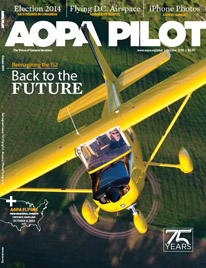 “Take a moment, look again at the cover of the October issue and think about the virtues of this lovely, yellow Cessna 152. I applaud AOPA for taking a step backward to what is reality for so many of us, not just in this article but in others. Thanks for showing that what a lot of us fly—an older airplane equipped with a mix of steam gauges and some modern, capable avionics—is really OK.”
Bob Jost
AOPA 99540
Murray, Kentucky

“The refurbishment of a fleet of Cessna 150/152s is absolutely brilliant! What a marvelous idea. Somebody is thinking way out of the box. It took real imagination, conviction, and hard work to put this program together with Aviat.”
Alan Reich
AOPA 2388943
La Center, Washington

I just finished reading the article on the “reimagined” Cessna 152. By telling you that I not only got my private ticket in a 150 but also my commercial, instrument rating (yep, an IFR-certified 150), and my CFI in a 150 you can probably make a fairly close estimate as to how long I have had my certificates and ratings. I am retired now and flight instructing is my retirement gig. How lucky am I? I average around 400 hours a year of dual given plus another 150 hours of personal flying in my own airplane.

I have had the idea for a long time of how great it would be to bring back to life all of the 150s and 152s deteriorating at their tiedowns. As a matter of fact, we have two 152s and one 150 in our fleet at the flight school I instruct at. They are not modern looking but they are well maintained, and at $90 an hour wet they are a bargain in today’s world. But they do not fly much. There are a few reasons for this but one reason I see people shun the 152s—and even other two-seat trainers, like the Diamond DA20—is big, and I literally mean big.

Americans have become very large over the past 20 years or so. This is a problem we see on a daily basis at our school. If you fill the tanks on the 152 you are going to have room for about 420 pounds. CFIs are bigger, students are bigger. Finding two American men that together weigh less than 420 pounds is more of a challenge then one might realize.

Promoting the “reimagined” 152 is a great idea to make GA flying more affordable. But this idea, along with any other idea to promote flying and increasing the pilot ranks, should include education on the necessity for a healthy diet and lifestyle. I see people on a regular basis who choose not to pursue flying because they simply do not fit in the airplane that they otherwise could afford to fly. The reimagined 152 will suffer from the same limitation.
David Simenauer
AOPA 3941995
Centreville, Virginia

Barry Schiff could include this question in his next quiz: “True or false: The sweepstakes 152 has a Garmin area 560 GPS in the panel, the sole means of navigation.” (Hint: Chris Rose’s beautiful in-flight photo of the airplane on page 69 clearly shows a mag compass at the top center of the windshield.)
Oscar Zuniga
AOPA 455536
Medford, Oregon

I am beginning to react very badly to stories such as Al Marsh’s—and not because of his literary talent, but because of the sheer volume of similar stories and what it tells us.

Our government spends a lot of our money protecting itself from all sorts of risks and hazards that it claims exist. They have taken Washington, D.C., and turned it into a city of concrete barriers and more security zones than you can keep track of—all, of course, at our expense. Who are they protecting besides themselves? You got it. Why are these government workers so much more valuable than everyone else? Try and answer that one. We should not be tolerating this, instead of assuming it is just a fact of life as Mr. Marsh indicates in his piece (“P&E: D.C.’s Special Flight Rules”).

Look at the D.C. area. It is the richest area in the United States. Why is this? Why do we allow this?  Write about things like that—not how Americans just resign themselves to whatever the government does or takes for itself. Pretty soon they will be feeding themselves at public expense and claiming it is for security purposes. It’s time AOPA and other organizations start taking a harder line on these people before they decide that we all work for them.
Dan Roth
AOPA 553011
Willoughby, Ohio

Reading Rod Machado’s column in AOPA Pilot over the years, I have been tempted many times to write him. His latest on the Ercoupe finally got to me. When I saw the headline, I figured he had to be talking about Ercoupes. You can fly with the canopy slid all the way back and with an elbow out the side, you feel like you’re cruising Main Street at 1,000 feet.

Oddly enough, it seems that in this age of six-figure toy airplanes, and unless an Ercoupe is an early LSA-eligible model, you can’t give these airplanes away. Maybe it is a macho thing, but rather than have the most fun you could possibly have in the air for less than $20,000, too many would rather pay a couple of hundred grand more to pretend they are hairy-chested bush pilots. That’s fine for those who can afford it, but for those who can’t, it would be nice for them to know that they have an alternative.

Any time I am around the airplane I can count on some old geezer who wants to tell me about way back when. I’m always happy to listen to them—actually, I think I’m one of them! It’s those people who remind me of what the best of flying is.
Bruce Moorad
AOPA 651819
Friday Harbor, Washington

Tell Rod Machado I had an Ercoupe and I bought it with no pilot certificate (“Somebody Pinch Me”). I flew it home and taught myself to fly. I finally got caught and was forced to take a checkride as a favor to the airport owner. I passed. I got the Ercoupe to stall by putting my hand down by the wing root as I held full up. Instead of mushing, it broke. I was only 16 then. Now I fly my Bonanza and am past 70!
Jim Deutsch
AOPA 1113874
Punta Gorda, Florida