Get the app Get the app
Already a member? Please login below for an enhanced experience. Not a member? Join today
News & Media Budget Buy: Old reliable

The Cessna 172 is considered the ideal starter airplane while you are still deciding what you need. 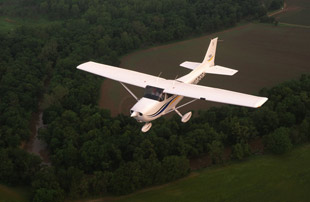 The Cessna 172 is considered the ideal starter airplane while you are still deciding what you need. The 1998 model skips the fit-and-finish problems of the 1997 models but keeps the benefits of the restarted production line that opened that year. The biggest benefit in the new models turned out to be the biggest advantage—the Lycoming IO-360-L2A engine rated at 180 horsepower but relaxing at a derated 160 horsepower, resulting in low maintenance costs. Sure, you can get a 180-horsepower Cessna 172S using the same engine, but owners say that only gets a slightly higher rate of climb.

The real world
Moore Aviation of Beaver Falls, Pennsylvania, operates five 1998 Cessna 172R aircraft and has a training contract with a local college. Office manager Linda Barthon calls the aircraft “very reliable.” The fifth was bought in 2013 for $80,000 and came equipped with a GPS receiver. When flown to Pennsylvania from the previous owner in Tucson, Arizona the engine had 3,200 hours on it but still had great cylinder compression readings. Under terms of the college contract the engine was required to be replaced as a precaution.

Moore Aviation Maintenance Supervisor David Duffy prefers working on the aircraft compared to a Piper Warrior because he can work on it standing up, rather than crawling on a concrete floor to remove inspection panels. He estimates the private owner flying only 50 hours a year will pay an operating cost of $85 an hour, to include fuel, maintenance, tiedown, and a $10-per-hour engine reserve fund. He suggests owners replace lights with LED bulbs. He finds it easier to work on than the school’s Piper Warrior III because he must crawl around on the concrete to look at the Warrior’s under-wing inspection panels. Duffy praises the aircraft for having less stability than a Piper Warrior, and while that might seem curious, he has his reasons. The school’s goal is to create better pilots. The Piper Warrior wing has more dihedral (V shape) in its wings than a Cessna 172R, so students work harder to keep it on course.

Vref value
Vref, the AOPA partner offering aircraft value estimates, suggests a base price of $91,000, increasing to $98,000 with a GPS receiver and upgraded radios.

How many in the fleet?
AIRPAC PlaneBase lists a 1998 Cessna 172R registered fleet of 193 aircraft. Airworthiness directives
There are few airworthiness directives that apply to the Cessna 172R alone. Most directives include it with other single-engine Cessna models, such as an inspection requirement for chaffing of the fuel lines. A directive calling for inspection of the landing gear for cracks in 2001 resulted mostly from student pilot training, but applied to the fleet of 172R and S aircraft. There was a requirement for a one-time inspection of flight-control rigging, including aircraft then on the production line at Cessna. In 2005 there was a requirement for inspection of the cabin heater to detect carbon monoxide leaks.

Biggest plus
Engine has proven reliable, with low maintenance costs

What else to consider
Pilots considering the Cessna 172R might also consider the Piper Warrior.