Get the app Get the app
Already a member? Please login below for an enhanced experience. Not a member? Join today
News & Media Debrief: Blade flier Jeffrey Cain

Flying vintage biplanes requires pilots to develop an intuitive feel for their aircraft and keen rudder acuity. But can a double-leg amputee develop such sensitivity? 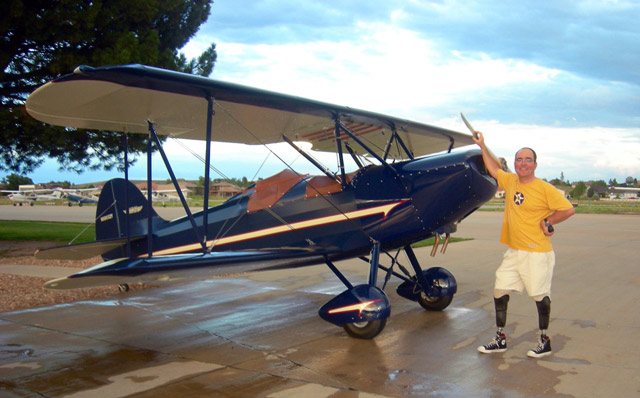 Flying vintage biplanes requires pilots to develop an intuitive feel for their aircraft and keen rudder acuity. But can a double-leg amputee develop such sensitivity?

Jeffrey Cain, 54, has logged about two-thirds of his 1,482 total flight hours since 1996, when he was critically injured in an aircraft accident that wrecked his legs below the knees. He resumed flying a few years later and currently owns and flies a Hatz biplane and a Piper J–4 Cub near his home in Denver.

“Douglas Bader had lost two legs, one of them above the knee, yet he flew Spitfires in World War II,” Cain said of the legendary British pilot. “I drew inspiration from Bader because he had already showed how much was possible.

“We all have limitations,” Cain said. “It’s up to us to discover them.”

Cain, a medical doctor, recently finished a term as president of the American Academy of Family Physicians. He lost one leg at the time of the accident and had the other voluntarily amputated six years later. He walks without a limp on two high-tech prosthetics, and most of the people he meets (and some coworkers) have no idea that he was ever injured.

Cain skis, snowboards, and teaches swimming, and his prosthetics are obvious when he participates in those activities. “If I feel people are staring, I just take off my glasses,” he jokes.

In flying, Cain said he has the same innate feeling for his aircraft that some able-bodied pilots acquire.

“Prosthetic legs are just tools,” he says. “If you use them enough, you can learn to control them with the same sort of dexterity as other tools you use regularly. A person with prosthetics has sensations and feels subtle pressures, but not in
the same places as people with feet and toes.”

Cain drives an unmodified car with a stick shift and flies tailwheel aircraft. But he gets a thorough checkout with a CFI before adding to the 50 types of aircraft he’s flown to date.

Cain flies for the pure joy and freedom he gets from it, and he’s taken more than 500 children on introductory flights. He also teaches skiing to disabled veterans and encourages amputees to attempt things they aren’t sure are possible. “There are real limitations out there,” he said. “But they are ours to find.”