Get the app Get the app
News & Media P&E/Proficiency: Alaskan adventure

Flying north of the Arctic Circle in a Cessna 150

The majesty of Alaska’s towering Brooks Range casts a mesmerizing spell. Waterfalls from melting snowcaps cascade over cliffs. Thousands of feet below the peaks, tufts of grass, moss, and lichen sprout from the swampy summer tundra. In this land almost untouched by man, where moose and bear are more common than people, the margin for error is tiny and the consequences harsh. 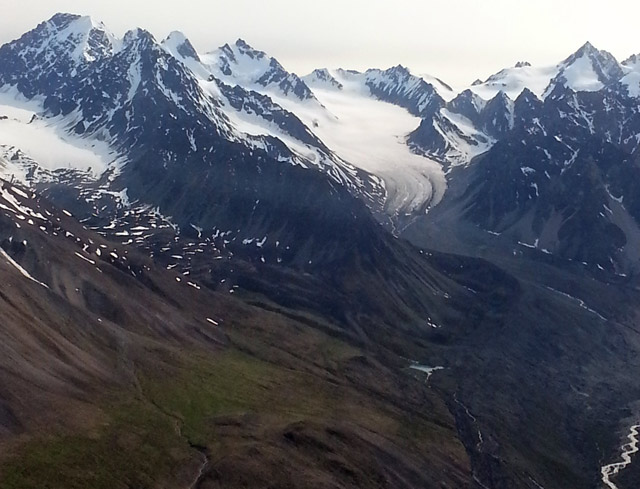 For a pilot with little mountain flying experience, the five-hour journey from the Anchorage area to north of the Arctic Circle in a VFR-only Cessna 150 requires careful planning and decision making—flying to the edge of the Arctic pushes the 150 to the edge of its comfort area.

Dwayne King, the founder of the Christian nonprofit Kingdom Air Corps who has decades of experience flying in northern Alaska and eastern Russia, specializes in training missionary pilots how to fly safely in remote areas over unforgiving terrain. I would be flying one of 10 aircraft making the trip, ranging from an Aeronca Champ to a Cessna 210, for a two-week aviation Bible camp. 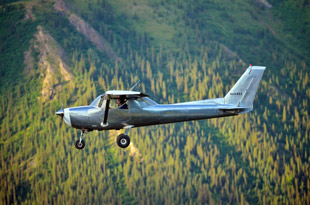 The Cessna 150’s performance weighed on my mind as I sloshed through puddles to pack and preflight the aircraft for the nearly 500-nautical-mile trip. The skies had cleared from rain the day before, and the mountains across the Matanuska River from King Ranch gleamed in the sunlight. But the rains had left the 1,800-foot grass strip soggy, and less than ideal for taking off from the side of a mountain in a fully-loaded, 100-horsepower aircraft.

Baggage for me and the new private pilot on board had been loaded in a Cessna 206 also making the trip, leaving only our flight bags and survival gear in the 150. (Alaska state law governs the minimum equipment to carry onboard an aircraft.) Conditions worsened when the wind shifted to favor the uphill runway—that’s not happening in a 150 with two aboard. My fellow pilot and other aircraft passengers were driven to Palmer Municipal Airport 25 nm to the south, where we would regroup. Taking off downhill with a tailwind, I used more than half the runway, even though I was solo, had three-quarter tanks of fuel, and only 30 pounds of survival gear.

Winds gusted to 25 mph at Palmer as we flew north up the Matanuska-Susitna Valley, formed by the glacier-laden Denali National Park to the west and Talkeetna Mountains to the east. Clouds had moved in over the Talkeetna Mountain peaks that ranged from 5,000 to 9,000 feet msl, necessitating the valley route, which offered gradually rising terrain from about 300 feet msl up to 2,000 feet in the passes. Flying through the mile-wide Windy Pass, with the valley a couple thousand feet below and the mountainsides extending that far or higher above, the walls of the pass looked close enough to touch. I thought of the tiny mosquitos I had been swatting and hoped the mountains and any up- or downdrafts in the pass wouldn’t mistreat the Cessna 150 in the same manner.

The mountains gave way to an expanse of plains 50 nm southwest of Fairbanks, a welcome relief as we neared civilization for a fuel stop and much-needed stretch.

North of Fairbanks, the terrain rises slowly to about 3,000 feet with smaller mountains before reaching the Brooks Range. Climbing above a scattered layer of clouds at Fairbanks, we turned on course to parallel the Dalton Highway and Trans-Alaska Pipeline for the 150-nm route to Bettles Airport. Few villages lie along the route, and those that do are accessible only by air (except for snow roads in the winter), making the best chance for receiving help during an emergency near the highway. Still, it could take days to be reached (the survival-equipment law requires a week’s food rations for each person). 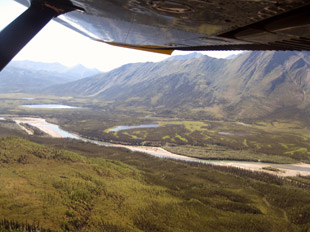 The Brooks Range treats the eyes to a visual buffet at every turn, but can be hazardous without proper preparation and survival gear. Both the mountains and tundra are inhospitable emergency landing areas. The flat, surprisingly verdant tundra is far from a suitable off-airport landing spot in a 150. Thawed from the harsh Arctic winters, the tundra’s spongy soil that sprouts grass and lichen is pocketed with foot-deep holes filled with murky water.

After stepping into water with nearly each step during an impromptu group hike in the Brooks Range, the sobering reality set in that what I had once thought were endless miles of emergency-landing options was anything but. An emergency landing on the tundra probably would be survivable, thanks to the Cessna 150’s low approach speed, but the aircraft likely would nose over after hitting the soggy, uneven ground.

The highway can serve as an emergency landing option, but from just south of Bettles north to Crevice Creek, a private grass strip where we camped, and Anaktuvuk Pass, it’s not an option at all—there are no roads. Gravel bars might work, if the rivers aren’t swelled from days of heavy rains.

Flying in a group of aircraft helps increase the chances of getting help after an emergency landing—other pilots can quickly transmit the location—but I also carried a personal locator beacon and satellite phone. Even with an exact location, terrain and the fickle weather can make rescue difficult, one reason the state law requiring survival gear includes means to generate heat and catch food, among other items. Needless to say, my ears were tuned to the hum of the Continental O-200 engine for any signs of concern, and I never fully relaxed over the remote terrain while trying to decipher which emergency landing spots would be least hazardous and allow for expedited help. 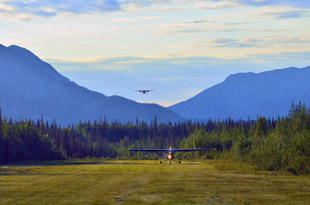 Just as safe emergency landing options are scarce north of the Arctic Circle, so are weather services. The weather can change quickly in Alaska, and with airports few and far between (even fewer have fuel), route planning and endurance became critical for the Cessna 150—if the weather ahead deteriorates unexpectedly, you must be able to find the lowest-terrain route to the nearest airport, making sure you don’t turn up the wrong pass and end up in a box canyon—and have the needed fuel reserves. Flying north from Anchorage, weather briefers used weather cams to provide insight all the way to Fairbanks. But the 150 miles from Fairbanks to Bettles have only two weather cams.

The only weather indications available at Crevice Creek were a windsock and nature. The very terrain that made the prospect of an engine failure terrifying was a useful aid in judging wind, ceilings, and visibility. Ripples on the numerous lakes served as wind direction indicators (wind blows from the glassy, or protected, side toward the rippled or unprotected side). Mountains rising from about 800 feet msl to 5,000 feet msl on either side of the turquoise John River five miles north of camp provided a gauge for ceiling and visibility. Sometimes, a scout flew ahead and reported weather conditions to the others on the ground, as was the case upon leaving camp at the end of two weeks.

Low ceilings and mist prevailed the morning of departure for the long trek home, so a pilot in a Cessna 152 took
off and provided a pirep for the group. After determining that conditions were marginal VFR, the group departed for Bettles where Internet and phone connections were available for the lead pilot to get a full weather briefing; many of
us downloaded weather on our EFBs and discussed a plan of action (the perks of civilization). The weather was forecast to improve continually on the way south, but the nearest weather cam was almost 75 miles southeast, leaving a black hole of information over an area of rising terrain. 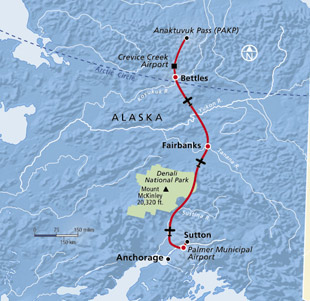 I took off with a turn-back plan—if conditions deteriorated or if they didn’t improve within 15 minutes after takeoff, the student pilot I was flying with and I would return to Bettles (see “Pilot Briefing: Fly-Outs,” page 38). The weather did quickly improve, making for a less stressful trip back.

Snow-covered Mount McKinley rose, stately, in the distance to the west as we neared the end of our six-hour journey home. Fifty miles from our destination, we altered course for a scenic route—well, every route is scenic in Alaska—by climbing over the Talkeetna Mountains to fly by the Talkeetna and Chickaloon glaciers. Inching our way up to 7,500 feet msl in a 200-fpm climb, we stayed over the Chickaloon River (the 150 isn’t going to out-climb this rising terrain) that flowed into the valley where we would be landing.

Knowing this two-week aerial adventure would come to a close in a few minutes, I reflected on the lessons I had learned flying over this harsh terrain and tried to imprint one last image of Alaska in my memory—the splendor of mighty glaciers just a couple of miles off the wings.