Get the app Get the app
Already a member? Please login below for an enhanced experience. Not a member? Join today
News & Media BizAv showtime

Every autumn the National Business Aviation Association (NBAA) holds its annual convention, an event that serves as the turbine-powered world’s biggest get-together. 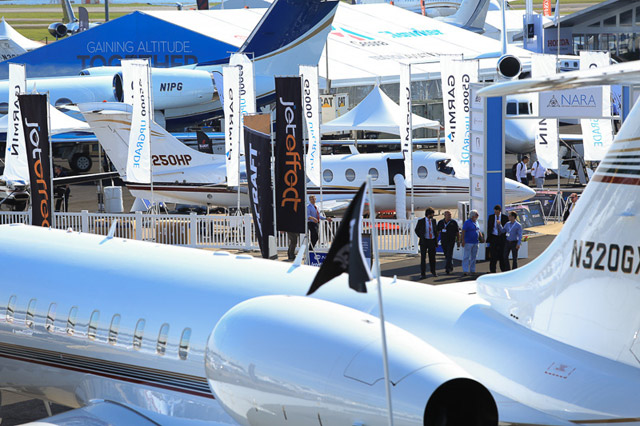 Bombardier introduced its latest offering—the Challenger 650—which is a $32.3 million, 12-passenger, 4,000-nm large-cabin jet with the Bombardier/Rockwell Collins Vision flight deck and GE CF34-B turbofans of 9,220 pounds of thrust apiece. Fractional operator NetJets is the 650’s launch customer, having ordered 25 airplanes (with an option to buy 50 more) back in 2012, when it was called the Challenger 605NG. Deliveries are expected to begin in mid-2015.

Also on hand was Bombardier’s Learjet 85, an all-composite twinjet that has been in development since 2008. The Lear 85 project has faced major hurdles, but first flight came in April 2014, and it was the first test airplane that flew to Orlando. In fact, this was the airplane’s first public showing; before, there were only mockups. The 470-knot Lear 85 has a $21 million price tag, a 3,000-nm range, double-club seating, and Rockwell Collins Pro Line Fusion avionics. Power is from Pratt & Whitney PW 307B engines of 6,100 pounds thrust each.

In other King Air news, Textron said that the King Air 250 will soon be offered with a 920-pound hike in maximum takeoff weight—which boosts useful load by 870 pounds. The new King Air 250 thus has a 13,420-pound maximum takeoff weight, putting it in FAR Part 23’s Commuter category. As such, pilots must earn a type rating to fly the heavier 250. The increased gross weight option adds $125,000 to the airplane’s base price of $6.1 million. Thanks to the higher weight limit, Textron says that range with six passengers and two pilots rises by 490 nm over standard 250s.

Safe Flight Instrument Corporation also made news. Its new icing-conditions detector is designed to detect when the air’s ambient air temperature and moisture content are conducive to icing, then trigger a warning annunciator in the cockpit. The simple, low-drag unit mounts under the wing in place of a standard inspection plate, and consists of a temperature probe and a heated sensor unit comprised of a prism illuminated by infrared light. The detector warns of the potential for icing before ice actually accretes, allowing pilots to safely divert. The instrument is currently being evaluated by aircraft manufacturers, and may be offered to the retrofit market.

Safe Flight rolled out a new wire-detection system as well. The system, intended for helicopters, is called the Dual Frequency Powerline Detection System and it issues staccato warning tones through the pilot’s headset when power lines are dangerously close. The unit has been available for years but it’s been recently upgraded to include both 50 Hz (for international use) and 60 Hz (for the United States) standards in one digital processing system. It is approved for a dozen helicopter types and will soon be approved for the Bell 429.

Bottom line: the NBAA convention seemed larger and had a more optimistic feel compared to those of the 2008-2013 period. The rollicking good old days of the 1970s have yet, if ever, to return, but the mood, like the economy, seemed ever so cautiously optimistic. And as always, next year’s convention will once more be a direct reflection of the economy’s trajectory.

As is customary, Honeywell issued its yearly business aviation forecast at the beginning of the show, predicting that 9,450 business jets—46 percent of them large-cabin versions, 28 percent midsize, and 26 percent small cabin—will be delivered through 2024. In 2014, 650 to 675 new jets will be delivered, which is a single-digit increase in growth over the past year. Although traditionally sanguine, Honeywell did hedge its bets by saying that it foresees a “modest slowdown” in projected demand in the short term. Embraer’s report, meanwhile, sees firming prices of used business jets as a deterrent to new jet sales, as well as a softening of demand in emerging markets. Corporations and high-net-worth individuals have the money, but a pervading lack of confidence prevents them from investing, and this is slowing the turnaround in jet sales, Embraer says.

Textron Aviation’s new Cessna Citation Latitude flew to the show and made a splash at the static display at Orlando Executive Airport. The Latitude features a large, six-foot-high cabin with a flat floor, an electrically actuated airstair door, winglets, Garmin’s G5000 avionics suite, and airframe elements borrowed from Cessna’s cancelled model 650 Columbus. At $16.2 million, the Latitude is aimed at its principal competitor, Embraer’s Legacy 450. Certification is expected in second quarter of 2015.

Embraer flew the first Legacy 450—a test article—to Orlando, where it was parked next to its bigger brother, the Legacy 500. FAA certification was awarded to the Legacy 500 during a ceremony at the exhibit hall. 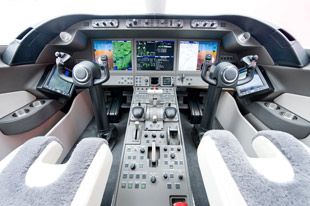 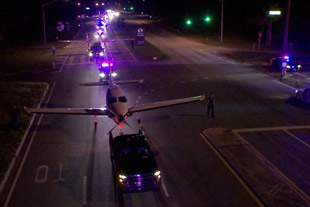 Airplanes bound for the convention center’s exhibit hall were towed along Orlando’s closed streets in the wee hours of the morning. 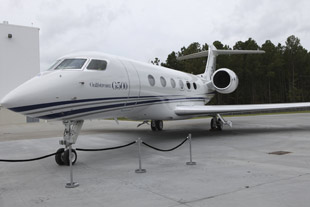 Gulfstream’s new G500 and G600 were introduced to the public in a huge event a week before the NBAA convention. The company has built two new assembly buildings for the airplanes at its Savannah headquarters. The G500 taxied under power during the introductory ceremony, which was attended by a 3,000-strong crowd of onlookers.