Get the app Get the app
Already a member? Please login below for an enhanced experience. Not a member? Join today
News & Media Sweepstakes 2015: Meet your new 152

Putting the fun back into flying

Your “Reimagined” AOPA 2015 Sweepstakes 152 is just like all the 30-something trainers you’ve ever flown—and it’s nothing like them.

Your “Reimagined” AOPA 2015 Sweepstakes 152 is just like all the 30-something trainers you’ve ever flown—and it’s nothing like them.

Stepping into the little airplane is like entering a time warp. The interior has the same “new-car smell” that it must have had when it came off the Wichita assembly line in the spring of 1978. It also has some modern improvements such as a Garmin GTR 225 radio and an aera 560 touchscreen GPS—digital additions that scarcely could have been imagined way back in the disco era.

And it flies precisely as designed: light and responsive, with an emphasis on fun.

“The lightness of the controls and the airplane’s immediate reaction to every input makes it especially enjoyable to fly,” said Luz Beattie, an AOPA staff instructor who learned to fly in a Cessna 150 and has logged thousands of hours in them. “A primary trainer really ought to be fun, because it’s the enjoyment that keeps students coming back again and again.”

N152UC has been rebuilt to new standards by the craftsmen at Aviat Aircraft in Afton, Wyoming, known for manufacturing new Husky backcountry airplanes and Pitts aerobatic biplanes. Your 152 was introduced to the aviation community at the AOPA tent during EAA AirVenture 2014, and it will be displayed prominently at other high-profile aviation gatherings throughout 2015.

Mark Evans, an AOPA staff pilot and CFII, said the 152 is “easy to fly, but hard to fly well. It’s a finesse airplane that rewards proper pilot technique, especially in slow flight and stalls,” he said. “It’s got an authoritative rudder, and it’s delightful in the way it can make crisp, sharp maneuvers such as S-turns that use almost no real estate at all.”

The modest airplane went by a different registration number (N67510) when it first went into service as a trainer. It logged more than 800 flight hours in its first two years of service, and it helped create pilots throughout the Northeast and Midwest. Alyssa Miller, AOPA e-media director and a CFI, said the 152 is an outstanding trainer because it allows pilots to fly by feel.

“Every pilot wants to know about V-speeds,” she said. “What’s the rotation speed? The best climb speed? Final approach speed? In a 152, you can feel all that. I had the airspeed indicator fail on a pilot’s introductory flight in a 152 and she was really nervous about having to land with no airspeed indication. I told her to fly by feel and not worry about it, and she ended up making an absolutely beautiful landing.”

Miller has taught in 150s and 152s in Alaska and she is convinced “they make better pilots faster” than other trainers (see “P&E: Proficiency,” page 85.). “They don’t tolerate sloppiness the way larger airplanes do,” she said. “It doesn’t hide mistakes.”

The hard-working airplane that became N152UC had logged about 6,200 hours when AOPA purchased it in early 2014 and subsequently flew to Wyoming for restoration. There, it was completely disassembled, the Lycoming O-235 engine was overhauled, and the entire airframe was painstakingly rebuilt using all-new pulleys, cables, wiring, and hardware. The airframe was stripped and repainted with a base coat of white and multiple layers of yellow.

“That shade of yellow requires at least six coats to give it the luster we’re looking for,” said Stu Horn, owner of Aviat Aircraft. “We’ve got a saying here that, ‘If it ain’t right, it ain’t right.’ And we don’t let anything go out the door until it’s right. If that means applying six coats of paint, so be it.”

When N152UC emerged from the Aviat factory, it made the arduous trip across the Rocky Mountains and came straight to AOPA headquarters in Frederick, Maryland. In addition to its official name, the AOPA staff has begun calling the aircraft by many other names—“Woodstock” and “yellow bird” among them. (If you’ve got another moniker, let us know!)

“Everyone talks about the color, and the color really does make this airplane distinctive,” said Evans. “But when I get in it, I just savor the experience. It’s a really honest airplane and a reliable, steadfast performer that really gives a good, warm feeling about the act of going flying.

“This is much more than just another airplane,” he said. “This one’s special because it does something few others can do. It can go out there day after day and produce good pilots, and that’s something aviation needs right now.”

How to be a winner

The AOPA 2015 Reimagined 152 Sweepstakes is open to every member of AOPA. Renew your membership for a chance to win. Sweepstakes runs from December 1, 2014, through December 31, 2015. For more information and to follow the project throughout the year, visit the website.

Adventures in a flying SUV 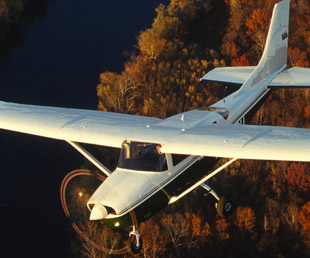 My 206SU is still in mint condition and flying regularly. I have more than 600 hours in it and have flown it all over the United States and Canada, including many trips from coast to coast. One of the best missions was flying the exact route of Lewis and Clark, from the mouth of the Columbia back to St. Louis, during the research and writing of the upcoming HBO mini-series Undaunted Courage.

It’s often flown with the rear two seats out to accommodate bikes, scuba gear, camping gear, or a lot of bags.

The airplane’s avionics were upgraded since the AOPA rebuild and were done by the same great team at Airborne Electronics in Sacramento. We swapped the two [Garmin] 430s and the CD player for an Apollo MFD and Garmin 530 and upgraded all the coms, and Airborne added a bunch of other great custom features to their original panel.

Once in Cheyenne, Wyoming, a crop duster pilot in a cowboy hat saw me walking into the FBO and he did a double take. He came over and said, “I bet you get this a lot.”

He looked at me, confused, and I realized he had no idea who I was. And he says, “Nice to meet you, too, but I was gonna say, I bet you hear this a lot, but that airplane looks just like the AOPA 206.”

I laughed and said, “That’s the one.”

He said, “I’ll be damned, I dreamed of winning that airplane. Can I peek inside?”

I gave him a tour and he shook my hand and said, “Boy, I’m here to tell you that’s the finest 206 that has ever been put together. You are one lucky SOB.”

Go online to see where all 19 sweeps aircraft have landed, including our Piper Ultimate Arrow that went homeless in Chicago.

Handing over the keys to AOPA’s 2014 sweepstakes winner 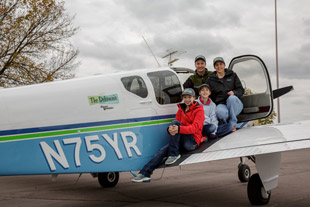 The mission: present the winner of the 2014 AOPA Sweepstakes Debonair with his new airplane. And do it while keeping the entire production secret. It was a big job, full of potential snags and wrong turns, but on Sunday, October 5, we pulled it off. In style.

First, we needed to get winner Steve Lagergren and his group of Van’s RV enthusiasts—goaded into a short cross-country by pilot and conspirator Bob Collins, a Minnesota Public Radio correspondent recruited by Senior Editor Dave Hirschman—away from his home airport at Litchfield, Minnesota. That way, we could set the stage for the post-award celebrations. But what if he didn’t want to fly that day, or decided to stay at Litchfield? A cast of dozens had been briefed in a thrice-revised timetable of events, and all of them required military-style precision timing.

Yours truly had been at the Anoka County Airport in nearby Minneapolis since Thursday, preparing the Debonair in the Golden Wings Museum facility. On the big day, AOPA President and CEO Mark Baker and a crew of key personnel from AOPA headquarters flew into Anoka, landing at 9 a.m. An hour later the Debonair and a small fleet of piston singles with the rest of the AOPA staff were on the way to Litchfield.

But when we arrived overhead, Lagergren and the gaggle of RVs were still there! Tension built. Would they leave? And if so, when? Soon enough, they were on their way to neighboring Winsted Airport. The Debonair took off and made an in-flight intercept with permission to form up on Lagergren’s RV as it flew back to Litchfield. Baker, aboard the Debonair, called
Lagergren on Litchfield’s Unicom frequency and broke the news. “This is your airplane,” he announced.

After a pause, Lagergren came back with “un-be-lieve-able!” Turning to Collins, he asked, “Who all was in on this?”

“Everyone you saw today,” Collins answered. “What a circus,” said Lagergren.

Back on the ground at Litchfield, Lagergren’s family, dozens of well-wishers, and news crews were on hand to record the event. And so ended the two-year-long saga of the Debonair’s restoration. Lagergren now has a one-of-a-kind classic that should serve him well as he pursues his instrument rating. Me, I’ve lost a good friend in N75YR. But the winner has a welcome new flying companion for a lifetime.