Get the app Get the app
Already a member? Please login below for an enhanced experience. Not a member? Join today
News & Media Celebrating longevity

At 102, Gene Leak still loves to ride along

It’s an overcast November morning. A Citabria single-engine taildragger is cruising above the farmland west of Lafayette, Indiana.

Scattered snow showers dot the sky, but not enough to hinder the view as Gene Leak, riding as a passenger in the airplane Martin Rice is flying, catches sight of the towering grain elevators on the edge of Tab, Indiana, near the Illinois state line. 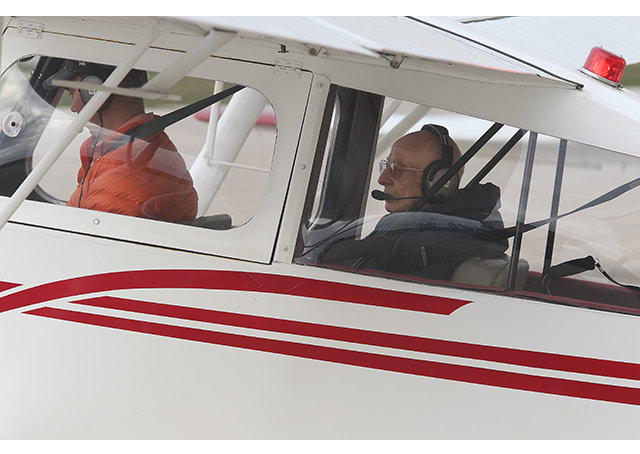 The grain elevators are a local landmark and a long-familiar sight for Milton Eugene "Gene" Leak, who owns farmland nearby and raised crops of corn and soybeans hereabouts starting in the 1930s.

The rich farmland of Warren County has a different look in November than it does in summertime, when a farmer’s practiced eye gazing down from an aircraft can find pleasure from seeing that there are no weeds in the beans, or in the corn.

"It’s just beautiful," Leak said by phone shortly after the Nov. 13 flight—an early birthday present from his friend Martin—landed back where it began at the Purdue University Airport in Lafayette. 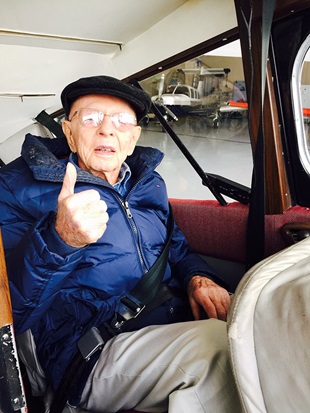 Rice wanted to make this sightseeing ride special for Leak, who has ridden in "everything that flies" from blimps to helicopters and airplanes over the years. Not just to keep his passenger entertained, Rice said, but to honor him on the occasion of his upcoming birthday on Nov. 18, when Leak would turn 102 years old.

So Rice planned the flight to include a drop-in call at Cottingham Airport in Pine Village, a private two-runway grass strip surrounded by the Indiana farmland Leak long worked. There they took a short break and Leak gave an interview to a local newspaper reporter. Rice and Leak took off again and overflew another airstrip known to Leak as the place where one of his cousins often flew, and where Leak became a general aviation enthusiast by riding along.

Next came the overflight of Tab, and giving the prominent grain elevators a look, all captured on in-flight video. Nearby, the flight passed above the church where Leak worshiped. It’s one of the oldest buildings in town, he said.

"I looked down and saw my wife’s grave. That’s unusual," he said.

They overflew Leak’s childhood home. A different house stands there now, but a barn built in 1911 soldiers on.

After landing back in Lafayette in a 12-knot west wind and climbing down from the aircraft, there were more media chores to do, because on this day Leak was something of a local celebrity to local news outlets eager to cover his 102nd birthday flight.

Rice, a local wealth advisor and Purdue graduate, and Leak have known each other for 20 years, becoming acquainted through a multiple-degrees-of-separation connection: Leak is the grandfather of a Rice family in-law.

The flight was as rewarding for the pilot as for his passenger. Rice said his admiration for Leak—who was born when powered flight was nine years old—comes as much from his friend’s approach to living, and staying connected to his Indiana farming heritage, as from the sum of Leak’s years.

"We’ve got to slow down in life and celebrate longevity sometimes, especially when longevity is accompanied by vitality," Rice said. "He climbed into that Citabria twice. It’s a pretty neat thing."

How does Leak stay lithe enough at his age to maneuver in and out of the Citabria’s confines, with an hour’s flying between each effort?

Spending a few minutes walking on a treadmill five or six days a week helps, he responded, noting, "If I don’t do it, I can tell, in my legs."

He adds a philosophical observation: "The way you were raised has a lot to do with it."

Flying is also part of a continuing celebration of life and vitality for Rice, who said he found a passion for aviation early in life, through magazines, but “buried it for 25 years” until a chance meeting at a reunion with a friend who had become an airline pilot “started a chain reaction” that led him to become "aggressive about flight training." 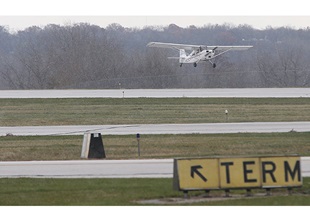 That’s no oversold version of how Rice followed up his decision to fly: Setting goals for the future, Rice and his wife Jolene became the owners of a Cirrus SR22 before Martin had logged his first flight hour. After attempting some local training, Rice earned his private pilot certificate in 2011 by immersing himself in his training in Superior, Wisconsin—away from his everyday distractions—with an instructor he had befriended through the Cirrus purchase.

Training in a Cessna 172, he soloed on a Sunday, completed his cross-countries on Monday, and took his checkride that Tuesday, he said. Sixty five days later, Rice earned his instrument rating, also in Superior. Over the next months he added taildragger experience in a 1946 Aeronca Champ that had been reconditioned by his airline pilot friend. In September 2012, Rice earned his commercial pilot certificate.

Rice flies the Cirrus a few hundred hours a year. Since becoming a pilot he has become an active AOPA member, and a member of the Experimental Aircraft Association.